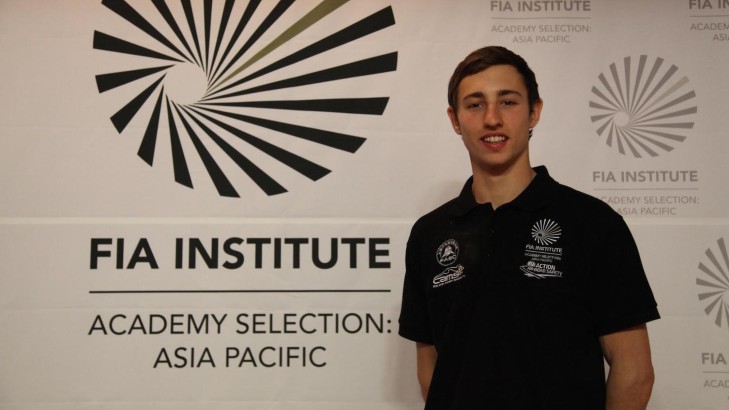 The 19-year old from Albury - who contests the Dunlop Series and is the son of V8 Supercars stalwart Brad Jones - topped the regional qualifier for the academy in Beijing over the weekend and will now have the chance to represent the Asia Pacific region and attend five camps over the next 12 months.

"It's such a fantastic opportunity to be able to be part of the Academy," Jones told v8supercars.com.au.

"Only 10 drivers get to be a part of it each year and to be selected as one will be an eye opening experience... It was a tough event and we went over there not expecting to win, but definitely giving it our best shot to come home and have the opportunity there."

Jones will receive a fully funded training program to help develop his career in motorsport, while actively promoting the principles of safety, fairness, and responsibilities on and off the track.

He and five other regional event-winning drivers will benefit from tuition and analysis from ex-Formula One driver Alex Wurz and former World Rally Champion co-driver Robert Reid, who are both Academy Performance Managers.

The sessions are staged across five camps, with the first in Scotland just days before this year's Dunlop Series and V8 Supercars Championship finale, the Sydney NRMA 500.

"It's a good mix of opportunity," Jones said of the program.

"I think the camp covers all areas of being a professional race car driver and how to get to the top, so it will definitely help give me a lot of tools to work with, and make me a better driver at the end of it."

Jones believed it was incredibly important that young drivers were afforded opportunities like this to help their motorsport careers.

"These days you can't just be the best driver out there - you have to have the whole package. They're trying to groom a driver to not only be the best of their ability in racing and controlling a car, but work on other aspects like mental edge, fitness, how you talk and present yourself in front of a crowd ... I think it's very important."

Jones' plans are not confirmed yet for next year, and the dates have not yet been released for all FIA camps. However, in terms of contesting the Dunlop Series for 2015, it would most likely to be manageable.

"For next year, we're not too sure yet. We've been quite busy and haven't had a whole lot of time to discuss or finalise what series and what events we will be doing.

"At the moment we're definitely looking into the development series and will most likely compete in that, but we're keeping our options open at the moment and trying to get as much driving in as possible."

Father Brad Jones was, as expected, hugely proud of Macauley and positive about the doors the opportunity could open.

"I think he's done an excellent job and I'm just very proud of what he's been able to achieve," Brad told v8supercars.com.au.

While he enjoys the Dunlop Series - having debuted at Townsville earlier this year, where he earned his best result of 10th - Brad revealed his youngster really has his eyes overseas.

"Macauley ideally would like to be racing open wheelers overseas somewhere. The difficult part is, it's money and opportunity, and my intention at the moment is for him to do the Dunlop Series next year.

"If another opportunity arose, I'm sure he'd reach out and grab it with both hands."

The Confederation of Australian Motor Sport (CAMS) which co-hosted the event with China's ASN the Federation of Automobile Sports of China (FASC) also both congratulated Jones on his win.

Courtney ready to take back the Island

Macauley Jones  ›
2014 Plus Fitness Phillip Island 400  ›
Stay In The Know
Sign up to the Virgin Australia Supercars Championship Newsletter
We use cookies to ensure that we give you the best experience on our website. If you continue to use this site we will assume that you are happy with it.Ok