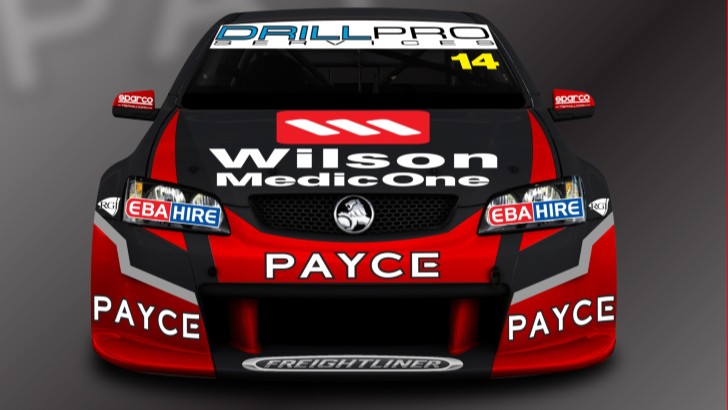 Young gun Macauley Jones will have PAYCE on-board the #14 VE II Commodore for this weekend's round of the V8 Supercars Dunlop Series in Perth.

Brad Jones Racing is excited to announce the partnership for the upcoming event, with PAYCE having supported Jones throughout his racing career, and now featuring prominently on his Dunlop Series racer for the Perth SuperSprint.

The Australian property development group has been involved in motorsport for some time, and according to BJR, has a good eye for spotting young talent.

"It's great to have PAYCE as our major sponsor for Perth, I can't wait to get the car out on track," Jones said.

"You won't miss me; the car looks fierce and really showcases the PAYCE brand. PAYCE have been quite a big part of my racing career, without them it wouldn't have been possible for me to go to New Zealand. PAYCE gave us that extra support we really needed."

PAYCE played an instrumental role in Jones' racing career, between him contesting the Formula Ford Championship; running in the five-round, open wheel series in New Zealand, the Toyota Racing Series; and as a minor sponsor when Jones stepped up to the Dunlop Series in mid-2014.

This weekend marks Jones' first time racing a V8 Supercar at Barbagallo Raceway, as well as the 100th round for the Dunlop Series.

PAYCE Chairman and Managing Director Brian Boyd said, "It's great to continue my support of the talented Macauley Jones and be part of his race campaign for this milestone 100th round of the Dunlop Series. I wish him the best of luck."

After a recent test day at Winton, Jones believes the team is strengthening.

"The test day was good and ultimately we left with some positives. It has been great working with my engineer Paul Forgie, it has been good to get more experience working with him as he's very knowledgeable and very switched on with everything that he is doing. As a team we are moving forward, Andrew Jones is doing a fantastic job in leading our Dunlop Series program forward and helping us strive towards our goals."

Jones is looking forward to hitting the track, with just one Dunlop Series round having taken place this season at the Clipsal 500 back in February.

"I'm really excited for Perth, these two months without racing feels like forever. Perth is a new track for me and I know it is going to be a challenge, but I think that we are going to rise to the occasion. I'm eager to showcase our PAYCE livery at Perth."

The Dunlop Series celebrates its 100th round at Perth this weekend, with a quick turnaround for the third round of this year's series at the team's home circuit, Winton Raceway fromMay 15-17.