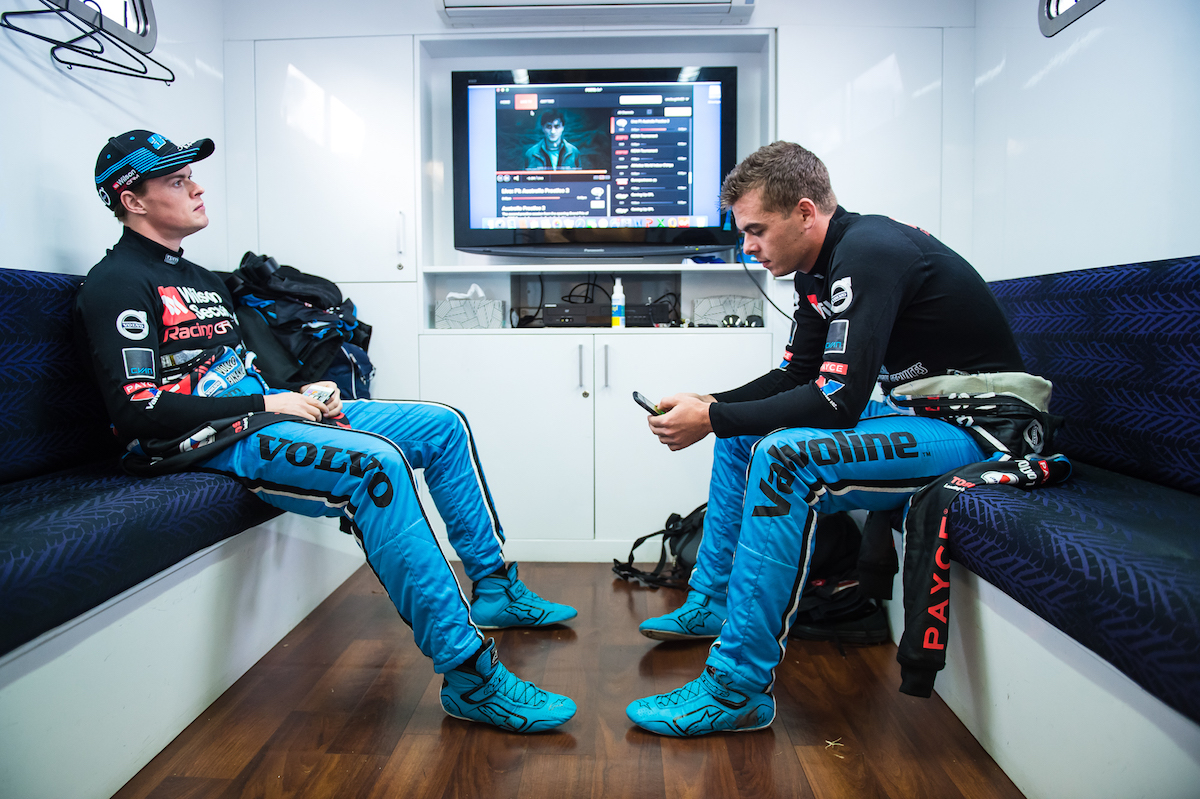 On the eve of the WD-40 Phillip Island SuperSprint, the venue at which McLaughlin scored his last win for Volvo in late 2014 and podiumed every race in 2015, the young Kiwi star said he had no doubt Moffat would bridge the current performance gap between them.

“Once Moff finds a comfort level in the set-up he will be there no dramas, but that is going to take time,” McLaughlin told v8supercars.com.

“He just needs time in the car. At Symmons Plains he was really strong, he had our measure for a long time but he just couldn’t quite get the time on the green tyre.

“At the end of the day we were hammer and tongs on the old tyre. He was pushing me hard and I was pushing him and it was really cool.”

Moffat, who has shifted to Garry Rogers Motorsport after three years with Nissan, set the fastest time in the opening practice session at the Tyrepower Tasmania SuperSprint at Symmons Plains.

While he finished only 20th on Saturday, Moffat was in the top 10 early in Sunday’s race but twice double stacked behind McLaughlin and copped a pitlane speeding penalty, cruelling his chances.

McLaughlin admitted Moffat’s issues had caused him to ponder his own driving style.

Moffat is the third consecutive teammate after Robert Dahlgren and David Wall to partner McLaughlin at GRM and struggle to match his pace.

While Moffat is rated higher as a V8 Supercar driver than the previous two incumbents of #34, his struggles have exposed McLaughlin’s predilection for a loose – or oversteering – set-up.

“I have been definitely thinking that; do I drive differently to other people?” McLaughlin pondered. “I might do a little bit.

“But each driver to their own. I do seem to extract the speed differently from the Volvo than other people.

“I hate understeer. Basically my rule for ‘Patches’ (engineer Richard Hollway) is get me to the corner and I will look after the rest.

“For me it’s not overly loose, but it’s a bit too much for Moff.”

McLaughlin said Moffat developing his own set-up for the Volvo and coming up to speed with it would help the overall competitiveness of the two S60s, which battle four Nissan Altimas, six Ford Falcon FG Xs and 14 Holden Commodore VFs on the V8 Supercars grid.

“Already this year Moff has gone down his path and I have gone down mine,” said McLaughlin. “We have worked on things; for instance he has been on a soft tyre plan and I have been on a hard tyre plan, so it’s been good.

“I think it’s good that Moff is going a separate way on set-up because at the end of the day we can learn from that and I can try his set-up and see if I can adapt to it if it’s faster.”

McLaughlin won twice in 2014 at Phillip Island, including the Sunday race when the Holden Racing Team’s Garth Tander ran out of fuel on the drag to the chequered flag. In 2015 McLaughlin claimed two seconds and a third.

The new 120km Saturday/200km Sunday SuperSprint makes its Phillip island debut this weekend, after a successful introduction at Symmons Plains. However, the hard Dunlop control tyre will be used at the high-speed MotoGP track rather than soft tyre used in Tasmania.

“I have always enjoyed Phillip Island as a driver, but the car also has a great motor which helps,” said McLaughlin. “I do prefer the soft tyre bit for our car but around Phillip Island it does seem to work pretty well for us."

“I think we genuinely have pretty good pace,” McLaughlin added. “Like every one says, the category has stepped up hugely. It is so close now, more than 10 cars can win on the day and we are definitely in that group.

“We are in that top five bracket that can really challenge for a podium or a win.

“We have found a really good balance and package for me. In the next few races I would love to win again – it’s been a while.”