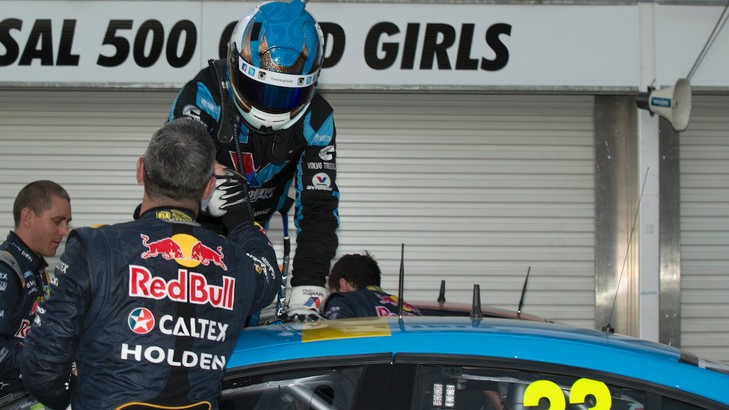 Craig Lowndes has admitted new V8 Supercars rising star Scotty McLaughlin reminds him of himself “15 years younger”, as the young Volvo driver took the bulk of the applause after his brilliant second place in Race Two at the Clipsal 500 Adelaide yesterday.

Lowndes was happy to cede the limelight to the 20-year old Kiwi while he went about the Championship’s opening race day as he intends to tackle the year; qualifying up-front, claiming a second and first place in the two 125km races and sitting atop the point score.

Lowndes has finished second in the Championship the last three years behind his Red Bull Racing Australia teammate Jamie Whincup and last claimed the title in 1999.

With his 40th birthday due in June, Lowndes knows that time is running out to claim title number four.

“The weakness from last year was the weakness in qualifying, that hurt us too much,” Lowndes told v8supercars.com.au. “If we can continue and be consistent up the front then it will lead on to much better results.”

But Lowndes isn’t getting carried away, with 36 races still to go and Whincup also racking up strong points from first and third place finishes.

“It’s great, it’s nice, I’ll take it. The important thing is to get that momentum started and I think we have got that. Now we will see what tomorrow’s 250km race brings. That’s a completely different beast; 78 laps, that is going to be a huge day.”

Lowndes admitted he was taking in the epic battle for second place in Race Two between McLaughlin and Whincup as he drove to victory, enjoyed the reception the 20-year old received from the crowd and his reaction to it.

Lowndes first broke through as a 20-year old driving for the Holden Racing Team, racing for victory in the Bathurst 1000 in 1994 and he – like McLaughlin is now – quickly won over racing fans with his ever-present smile and good nature.

“He does remind me of me when I was 15 years younger,” said Lowndes.

“I think he is fantastic, he does a bloody good job. He has great speed, great natural talent and he has a great opportunity with Garry Rogers.

“I always knew the Volvo was never going to be slow car although I didn’t think it would be this quick at this point.”

Lowndes was even happy at the prospect that McLaughlin’s increasing popularity might eat into some of his number one fan favourite status.

“It’s great to see a young kid get involved and be successful and it was great to hear the crowd roar.

“They appreciated a bloody good race and a new manufacturer coming to the fore."

Lowndes said he hadn’t specifically addressed the qualifying issue over the off-season, but admitted it was an ongoing focus for him and long-time engineer Jeromy ‘JJ’ Moore, while driving in – and winning - the Bathurst 12-hour enduro and constant attention to driving style were helping.

“I think doing the Bathurst 12-Hour also helped me in confidence. Driving other cars for me helps because it starts you up again driving the V8 Supercar.

“You do get up in traditional style, so when you get out of that and drive something else like a GT3 car, which has a huge amount of aero, it clears your mind again, you start again and away you go.

“I have changed my style a little bit, especially up through the staircase (turns 4-7) so I am delighted that stuff is more positive.”

Scott McLaughlin  ›
15' Wilson Security Racing GRM ›
15' Red Bull Racing Australia ›
2014 Clipsal 500 Adelaide  ›
Stay In The Know
Sign up to the Virgin Australia Supercars Championship Newsletter
We use cookies to ensure that we give you the best experience on our website. If you continue to use this site we will assume that you are happy with it.Ok