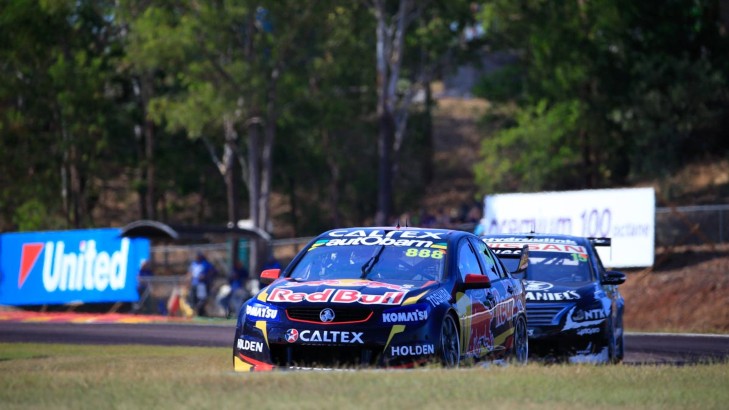 Race wins - it's as simple as that for Red Bull Racing Australia, as the team fights to keep Craig Lowndes and Jamie Whincup in the V8 Supercars Championship battle with Ford foe Mark Winterbottom.

After two wins on Saturday and a third place in yesterday's intense 200km race at the SKYCITY Triple Crown, Whincup elevated to third in the points, surpassing Lockwood Racing's Fabian Coulthard, who had a horror run, with a 186-point gap to Frosty.

And while Lowndes remains second, his gap to Winterbottom has extended out to 161 points. He admits it will not be an not an easy feat to bridge that gap.

"We've got to win races, there's no doubt about that," Lowndes told v8supercars.com.au.

"Like Jamie said on Saturday - you've got to win races to get points and especially if the gap has blown out to that much. Even a 101 point gap - it didn't sound like much (coming into Darwin) but it's damn hard to close up.

"So we just need to score victories, there's no doubt about that. That's what we're aiming for."

Lowndes qualified on pole for the first time since 2000 at the venue, and while he and Whincup collected all three ARMOR ALL Pole Awards over the weekend, it marked the first time Triple Eight had started from first on the grid at the Hidden Valley circuit.

Lowndes and Whincup both elected to start Sunday's 200km run on used hard tyres, while many of the field - and most around them in the top 10 - started on Dunlop soft compound tyres.

Teams had two sets of softs, used only that day, to run in the race, with the option of running hards if necessary. Some ran the softs all day - like Winterbottom, who had strong pace and tyre life.

An early safety car played into Red Bull's hands, seemingly negating the advantage gained for those running the quicker softs in the first stint, but Lowndes tangled with Winterbottom's teammate Chaz Mostert shortly after and damaged his best set of tyres.

"We had already made our first stop - we went from the hard tyre to the soft tyre - the safety car had bunched everyone back up and we were blazing through the field," he explained.

"We were on a better tyre, obviously with tyre life, but we just got caught up with the congestion up into the hairpin and everything else and had contact with Chaz. Side contact and popped the tyre off, which meant we had to come in and put one of our next set of the tyres on the car - that front left had done, two stints, basically.

"We had to split and there just wasn't enough tyres in our bank to juggle them, so we had to use one of our brand new tyres and then we put the other three on, the car balanced up again... we were almost a lap down by that stage."

Lowndes managed to come home 17th and while he was happy with the performance of his Holden Commodore VF, the fan favorite was aware of FPR's strengthsand where his team needs further improvement, despite having a positive test day since the last V8 Supercars event.

"I think we were surprised at the FPR guys getting the longevity out of the tyre," he said. "They've been good at that and it is something they'll continue to be good at, especially going into the long distance races at Sandown, Bathurst and all those tracks.

"We're going to need better longevity out of our tyres which, as I said, FPR has got...

"We had all the poles, Jamie had two victories which is great, we were on target to have a good run (Sunday) until the tyre issue - so not complaining, just got to get on with life and see what we can do for Townsville."

The hybrid street circuit is the only place on this year's calendar - other than Pukekohe in New Zealand, where we raced in April - Lowndes has not had victory, though Whincup has won five of the 10 races at the North Queensland venue.

"It has been a mixed hunting ground for us, we've had good results and bad results, so we are going up there with some confidence and some fire in the belly to bounce back," Lowndes smiled.

The Castrol Townsville 500 - Driven by TAFE Queensland runs from July 4-6. Secure your tickets now - the best viewing is from the grandstands.