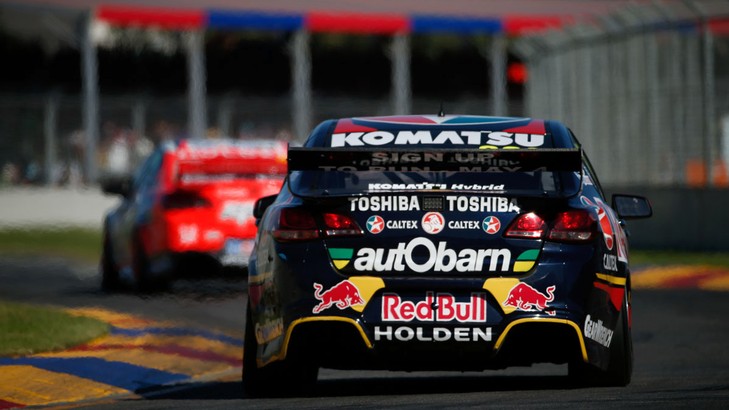 Craig Lowndes has congratulated James Courtney’s stellar drive to take the Clipsal 500 Adelaide trophy, and while he pushed hard, admitted his #888 Commodore was past its best in the dying laps.

“We had nothing left really, to be honest,” Lowndes said of that final lap, where he had his last chance to clinch the Clipsal title he hasn’t won since 1999.

“He just got off the corners a little bit better than we did, we just didn’t have the rear tyre to go where we wanted.

“And I thought the last lap we’d have a big push, but we didn’t quite get it into position, especially through turn eight, where I wanted to be to have an attack into turn nine.

“It’s a bit disappointing but that takes nothing away from James, he did a great job. He drove smart, obviously starting 15th he had nothing to lose at the start in a sense, but of course had a lot to lose at the end.

“He drove smart, didn’t make mistakes and brought it home, so it’s a credit to HRT and what they’ve achieved – but we’ll push on and refocus now for Grand Prix.”

Courtney got past Lowndes on lap 51, when the Red Bull racer was conserving fuel. Whincup was leading, but shortly after was handed the pit lane penalty that soured the day for the Saturday race winner.

“As the fuel number got better we could push on a bit better and stay with James, but the Safety Car came out and gave us a huge benefit because we didn’t have to save fuel at that point and we really put on a good battle.”

Jack Perkins’ lapped car was teetering ahead of the two front runners, and avoiding the Falcon had Lowndes out of position into turn eight, which didn’t help his cause.

“I had to turn in a bit early and had a bit of understeer, and thought I might get away with it but as the wall loomed up towards me it was pretty evident I wasn’t going to get around!

“So we tried to minimize the contact, which I think we did pretty well, and kept pressing on. I still had another four corners to go so we weren’t in a position at that point to really contest a pass on James – we had to be thankful for second and two seconds and a win is not too bad around a place like this.”

Lowndes led the Championship at this point last year, but was only 12 points ahead of Whincup. This time, it’s a 108 gap between the teammates, with the five-time Champion down in sixth after a tough weekend.

Interestingly, in the past 15 years, nine of 15 drivers who have won a race at the Clipsal 500 Adelaide have gone on to win the Championship. For the first time, this season three race winners have come out of the event – Whincup, Lowndes and Courtney. Can the fan favourite clinch his fourth Championship this year?

“It’s nice to be out of here leading the Championship, I think it sets up a good season, it gives you a bit of confidence going into the next rounds – but it’s a long year. It’s all about being consistent… I think we’re going to be a big shot.”

Can HRT really be a force to be reckoned with this year?

“There’s no doubt about that – they always have been,” Lowndes said.

“It’s just probably about them having their own confidence and being consistent – that’s the hard bit.

“They have had pace the last couple of years but never been able to string it together for most rounds. That’s going to be the big factor for them, if they can do that definitely no doubt they’ll be a strong combination and a threat to be reckoned with.”

The V8 Supercars now head to the 2014 Formula One Rolex Australian Grand Prix, and Lowndes is the ambassador for the event.

“We’ve got to be there focused trying to win races. There will be more of the off-track stuff, which is a side I don’t mind anyway. We’ll get on with it and hopefully racing will take it’s own course and speak for itself.”

Bright Will be Right for Albert Park

Courtney puts the Holden Racing Team back in the winner's circle