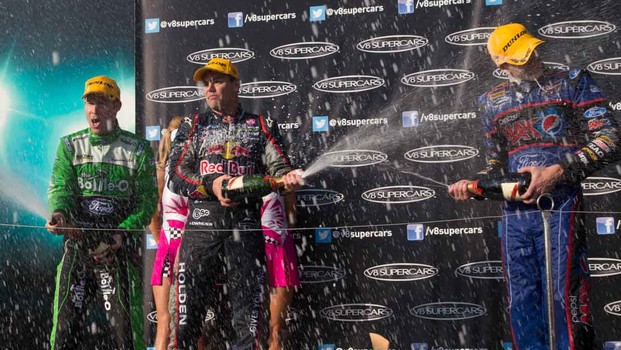 Craig Lowndes has won a time-certain race at the SKYCITY Triple Crown after a huge accident at the end of the field on the first lap.

Eight cars did not finish Race 19 – many not making it past the first lap – the last of three races at Hidden Valley Raceway in Darwin over the weekend.

Lowndes had a thrilling battle on his hands on the last lap of the race, when Mark Winterbottom was all over the back of the Red Bull Racing Commodore.

One more lap and Winterbottom – winner of today's earlier race – looked like he would have had Lowndes.

But it was the beginning of the race that will be talked about.

There was mid-pack contact when Scott McLaughlin was sandwiched between two cars, and it seemed to run back through the field from there.

Many more cars were damaged and it was unclear whether they would complete the race – Fabian Coulthard in particular, when he failed to start the car for the warm-up lap before restarting.

James Courtney, who was on top of the world after scoring pole position earlier today, also didn't finish, stranded at the hairpin late in the race.

Throw in a drive-through penalty for Jamie Whincup for a pitstop error, and it has been a huge, Championship changing race.

Mark Winterbottom  ›
15' Red Bull Racing Australia ›
2013 SKYCITY Triple Crown  ›
Stay In The Know
Sign up to the Virgin Australia Supercars Championship Newsletter
This website uses cookies to improve your user experience. By continuing, you will be providing your consent to our use of cookies.Ok