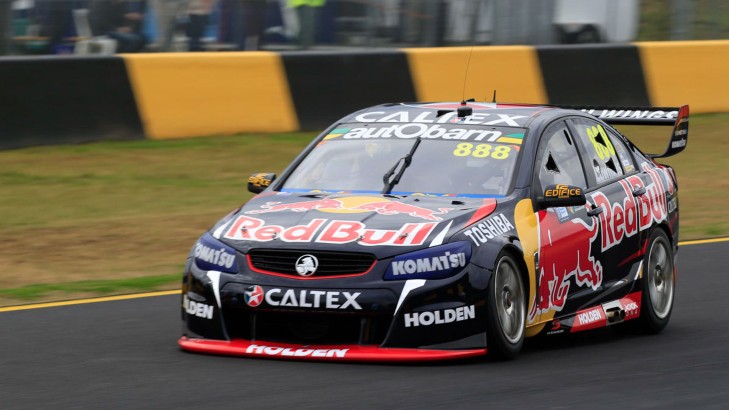 V8 Supercars superstar Craig Lowndes heads into today's test at Ipswich knowing the strength of his championship and Bathurst bids rests on Triple Eight finding more speed in the troublesome 2015 Holden Commodore VF so he can take the fight to the dominant Prodrive Racing Australia Ford Falcon FG Xs.

With the three-round Pirtek Enduro Cup coming up, Lowndes is the leading Holden driver in the championship, running third in his Red Bull Commodore behind Pepsi Max duo Mark Winterbottom and Chaz Mostert.

Another PRA driver David Reynolds sits fourth in The Bottle-O Ford. Lowndes could drop out of the top three if a PRA protest against him to be heard at the September 11-13 Wilson Security Sandown 500 is upheld and he cops a points penalty.

But while he is Holden's number one hope in the championship, Lowndes hasn't won in nine races.

"Prodrive are still the benchmark and we obviously need to find a bit more car speed."

Triple Eight will be joined at today's test by Queensland-based TEKNO Autosports.Erebus Motorsport was also scheduled to test, but the team has postponed due to the tight turnaround from a ride day following Sydney Motorsport Park and travel down to Sandown.The team utilised a rookie test day for Ash Walsh in July, which helped iron out some issues.

What was most disturbing for Lowndes at SMP was his car lacked high-speed aerodynamic performance, especially in the 250km/h turn one.

Considering Mount Panorama is a circuit where aero balance is also vital, Lowndes acknowledges pace must be found to not only assist in his championship fight but his chances of claiming a fifth Bathurst win.

And if Lowndes' high-speed balance issues are reflected across the Holden entries that can only aid PRA's chances of scoring a hat-trick of wins in the Supercheap Auto Bathurst 1000. That's something that would go down like a lead balloon at Holden, given the race's high profile and massive interest among once-a-year fans.

"Our high speed (grip) wasn't so good and our aero wasn't matched and through turn one we weren't strong all weekend," Lowndes reported.

"That wasn't just following people where we'd get the aero imbalance. Even on our own we'd go in a bit of understeer and exit with a nervous oversteer car. It wasn't a well-balanced car.

"If you don't get it right here then you have got to start thinking about what Bathurst is going to look like.

"It will be interesting because no doubt you will want to run low downforce to get down the straight, but across the mountain you have got to sacrifice that (grip) side of it. So it is going to be an interesting game to pay."

As previously reported, Triple Eight isn't the only Holden team to strike issues with the balance of the 2015 Commodore. Triple Eight technical director Ludo Lacroix was responsible for the redesign which centred on extracting higher speed (less drag) from the car without sacrificing downforce.

After a strong start to the year Holdens have won just two races out of the last 17.

The silver lining for Lowndes and engineer Grant McPherson is team-mate Jamie Whincup and his engineer Mark Dutton made progress with their setup at SMP, scoring a win in the soft tyre sprint race on Saturday afternoon.

"They hit on something that suits Jamie," said Lowndes. "We are not too far away from his setup. It was encouraging that Jamie's car speed over the weekend was good."

McPherson also has plenty of experience working on low downforce set-ups at PRA and Lowndes admitted that was coming in handy as the team seeks answers to its issues.

"Grant is new to the team still and there are a lot of things we have tried in the past and put in a basket over there and said 'we have done that, we have tried that, we don't worry about that'.

"But Grant is going 'let's get these toys out of the box and revisit all that'. So he is opening up some lines and ideas and we need a test day to revisit the past to really put it to bed whether we like it or not."