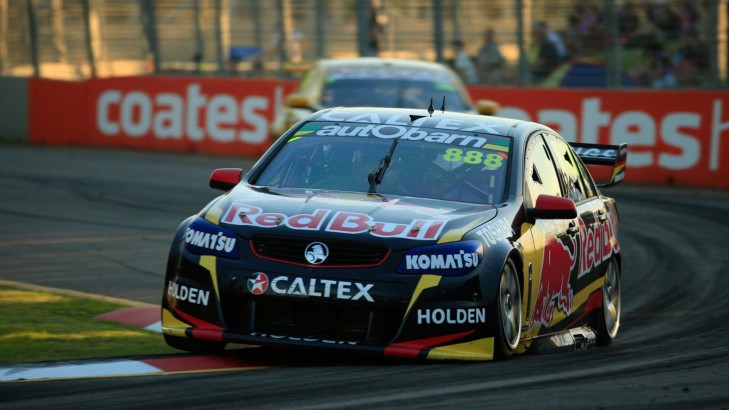 Craig Lowndes' co-driver Steven Richards will take the reins of the #888 Holden Commodore at the team's upcoming test on Monday, while the Championship contender is overseas getting ready to race at the Spa 24-hour classic.

However, Lowndes isn't concerned about missing the Red Bull test day -one of three independent tests allocated for the year -despite coming off his worst round of the 2014 season in Townsville, which saw him drop from second to sixth in the Championship.

According to Lowndes,running on the Dunlop soft tyre and car developmentare the main focuses for the team. He, of course, has faith his teammate and defending Champion Jamie Whincup will maximise the value of the day.

"No doubt Jamie will have a big impact on the next step, especially with the soft tyre, so I don't have an issue or problem,"Lowndes toldv8supercars.com.au of missing the test.

"I'll come back and hit the ground running at QR.

"It's a track we know exceptionally well. In the past we may have been a little bit relaxed going into the weekend because we believe we know the track so well that maybe we don't treat the circuit ... (like) the other teams. So we have to be mindful of that.

"But by the same token, we know the track, what we need to do, what setup we need to put in the car.

"I think as long as we're keen and hungry for victories we'll be right up there somewhere. Again, the soft tyre around there will be hard."

An availability clash at Queensland Raceway has led both Red Bull and TEKNO Autosports to shift their test day from Tuesday to Monday next week, meaning Richards has been able to rejig flights and attend, though he was originally scheduled to miss the day. The new-to-Triple Eight co-driver will now be able to logvaluable V8 Supercar miles before he also jets off to Belgium to race at Spa.

In a twist of fate, it's now Jamie Whincup's co-driver Paul Dumbrell who is unable to attend the test.

Dumbrell has been keeping himself 'race fit' by contesting the V8 Supercars Dunlop Series, in which he sits second in the Series points.

All in all, the #1 and #888 will be on-track on Monday and the team plans to conduct another test day before the Pirtek Enduro Cup, beginning in September with the Wilson Security Sandown 500, with all drivers and co-drivers present.

Percat: "That was my best drive"

Craig Lowndes  ›
15' Red Bull Racing Australia ›
2014 Coates Hire Ipswich 400  ›
Stay In The Know
Sign up to the Virgin Australia Supercars Championship Newsletter
We use cookies to ensure that we give you the best experience on our website. If you continue to use this site we will assume that you are happy with it.Ok