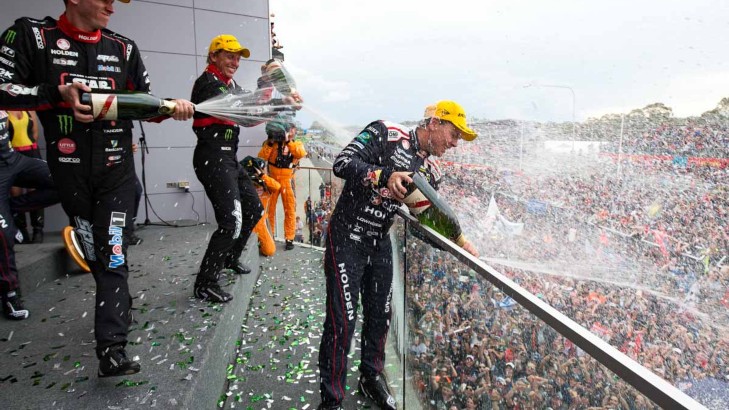 Despite his Holden Commodore VF showing superior pace on the way to victory in yesterday's Supercheap Auto Bathurst 1000, Craig Lowndes has conceded the Ford Falcon FG X is likely to return to the top of the pile at the Castrol Gold Coast 600 street circuit in two weeks.

And that's bad new for his hopes of engaging championship leader Mark Winterbottom in a serious title fight over the final four events of the season.

In taking the win with Steven Richards in his Triple Eight-fettled Red Bull Racing Holden, Lowndes was able to control his lead over Winterbottom and his Prodrive Racing Australia Pepsi-Max Ford throughout the crucial final stint of the race.

And while Lowndes' team-mate Jamie Whincup finished only 18th after his late-race drive-through penalty, he reset the race lap record while three Holdens finished in the top four and six in the top 10.

Lowndes' win moved him into second place ahead of the injured and absent Chaz Mostert in the title fight, albeit 399 points behind Winterbottom and therefore somewhat dubious that he can close the gap.

"This (win) is more a function of a unique race track," Lowndes told v8supercars.com.au. "We knew we were going to be in better shape in terms of a speed comparison with the Falcon coming here.

"But we will see what happens when we go to the Gold Coast, because that is more of a stop and squirt sort of a track.

"We still think the Falcons have got better drive off corners the way that they drive them.

"So maybe the Gold Coast might turn it around."

Even if the Falcons don't show superior performance to the Holdens on the Gold Coast, Lowndes conceded wiping out Winterbottom's championship lead would be a tall order.

"Gold Coast we have had hits and misses so we need to make sure we close the enduro season out on a high.

"Then we have the run home, so for us the championship is still a possibility, but it's a long shot.

"Frosty is very consistent, he is very fast and we need him to have a DNF - maybe two - to have a chance.

"For us its all about qualifying as far up as we can. The team will do their job and we will do ours."

Lowndes played down the chances of Red Bull instituting team orders forcing Whincup to defer in races so his points haul could be maximised.

"At the end of the day I still have to qualify at the front. I can't qualify 24th and still expect him to pull over for me," he said. "We have still got to do our job."

Six of the best