Lowndes: The setbacks don’t get easier 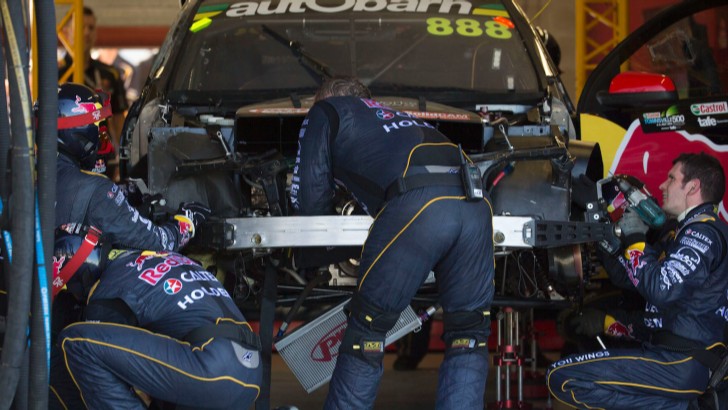 He debuted in the category in 1996, has three Championships under his belt and five Bathurst 1000 wins - but for Craig Lowndes, setbacks such as Townsville don't get any easier.

High-stake lap one antics in the first race ultimately led to a DNF of the Castrol Townsville 500 - Driven by TAFE Queensland Race 20. Lowndes bounced back to sixth in the second race of the weekend, but Sunday's 250km big points scorer was a nightmare - the #888 Holden Commodore was losing water, meaning Lowndes had to pit every eight to 12 laps to continue.

The Red Bull team is not yet completely sure what the issue with the engine was - it is now with KRE (engine supplier).

He admitted that after many years racing it is still difficult to swallow a hard run, but the #888 driver always focuses on the positives, and looks forward.

"Every bad weekend is always tough to take - it doesn't get any easier, no," he told v8supercars.com.au.

"Because, I think, of the passion (and) everything you go into a race weekend for. Are you going to have a successful one and hopefully some victories?

"When we have a problem like we did on Saturday, I'm very hard on myself. When we have problems like I did on Sunday, I try to put a bit of humour in there and diffuse it for the boys because it's not much we can do about it, we just have to sort through it and get the best result we can, which I think we did.

"You've got to try and make the best of what you've got - we managed the car and the guys managed the stops to get the car home and get some points. Obviously last is never a good thing but at least it's a couple of points towards the Championship ... managing results and finishing races to score the points is what the Championship is all about."

Lowndes is currently overseas to race at the Spa 24-Hour classic next week, and will miss the team's scheduled test day on Monday at Queensland Raceway, where Red Bull will focus on Dunlop soft tyre running ahead of the soft-tyre only round there, the Coates Hire Ipswich 400 from August 1-3.

The 40-year old isn't concerned about missing the day, and team principal Mark Dutton said it was a great opportunity for #888 co-driver Steven Richards to get a full day of running in the new generation Commodore.

Dutton was impressed with Lowndes' ability to swallow the tough showing at Townsville and get on with the job - particularly since he believescar#888 driver was in the box seat for a win on Sunday, saying the strategy for that car was set to play out better than eventual winner, teammate Jamie Whincup's.

"The promising thing was how well the team was working, in adversity," Dutton said.

"And with Craig, he didn't ... get the red mist on, when that happens it can ultimately get worse.

"I was really impressed with Craig's mental toughness. Race two he drove a fantastic race.

"To back it up on Sunday, with fantastic qualifying even though there was a penalty, fantastic shootout, and the race, he had good pace he was in the box seat. I think, the strategy with him was slightly easier to win than what we did with Jamie, so until the engine dramas, we were hopefully on the way to a one-two.

"Craig continued to work on well, not drop the ball, not crack the shits - which can happen, but doesn't happen to Craig. It was good to see.

"We've got to remember Craig's strength has always been the run home in the season. So we're still in very good shape."

Despite his falling down the order, Lowndes was glad the other side of the garage was able to taste victory in North Queensland, with Whincup asserting his 'King of Townsville' title, adding two wins to his amazing tally of seven wins from 13 V8 Supercars races staged at Reid Park since its inclusion on the calendar.

"It was still fantastic for Jamie to have a couple of victories because it's always nice when one half of the side having a bad weekend, the other side at least keeps the team motivated and in good spirits," Lowndes said.

Lowndes answered the 'Fast Five' questions for v8supercars.com.au yesterday - click here if you missed it.