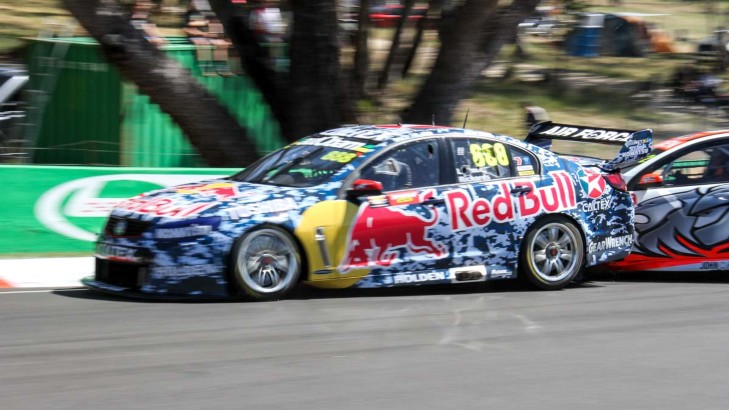 Red Bull Racing is in a race against time to get Craig Lowndes' Holden Commodore VF repaired in time for this afternoon's ARMOR ALL Top 10 Shootout at the Supercheap Auto Bathurst 1000.

Lowndes was the innocent victim in this morning's practice session when Warren Luff's brakeless Holden Racing Team Commodore took him out at turn two.

Lowndes' car suffered extensive rear-end damage, but team owner Roland Dane is hopeful it will be ready to roll on-time.

The 10th fastest qualifier, the Lowndes/Steven Richards entry is due to be ready at 5.10pm.

"We will give it a good go and if we don't make it we'll ask the crowd what they think about Lowndsey not being in the shootout and ask them to hurl bottles on the track to delay the start long enough so he can be there," he joked.

"The damage is principally in the rear because it went in backwards. There could have bene a tweak on a rear wishbone, but most of it is bodywork and supporting structure behind the bodywork.

"The problem is that end of it is easier to repair in the workshop and less easy when you are not."

Dane said he was not concerned Lowndes would enter the shootout with only one warm-up lap to test out the rebuilt car.

"It would have been nice to do the end of that session on fresh tyres to see where he is at, but he did that yesterday.

"The last thing I need is him on pole, just in the top six or eight will be good.

"We know where the car was this morning, we know what we want and if we get the bodywork in place it should be happy days."