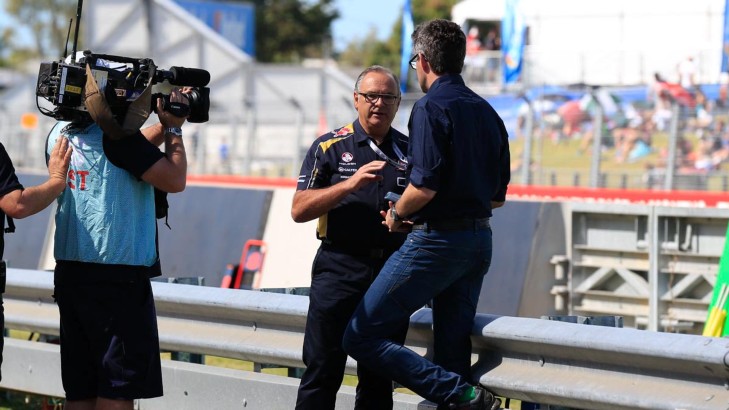 Craig Lowndes has questioned the fairness of the penalties dished out to him after yesterday's incidents at the Castrol 500 Townsville - Driven by TAFE Queensland that effectively ended up costing him pole position for today's 250km mini-marathon at Reid Park.

Lowndes set fastest time in the ARMOR ALL Top 10 Shootout in his Red Bull Racing Australia Holden Commodore VF, but was relegated to third on the grid after being handed a two spot grid penalty by investigating officer Jason Bargwanna for hitting Holden Racing Team's Garth Tander on the opening lap of Race 20 yesterday.

He also collected a 25 point penalty for making contact with Courtney's teammate James Courtney on the same lap.

Lowndes was also turned around on the first lap of Race 20 by Erebus Motorsport's Will Davison, the damage sustained in that incident eventually causing him to crash out of the race.

"The one thing you would say and we spoke to him (Bargwanna) about it was I ended up in the wall yesterday and Will got the same penalty as I got and I only nudged a couple of people," Lowndes said.

"We said you have to look at the incident as well as the after-affect."

Meanwhile Red Bull team owner Roland Dane was upset because Lowndes wasn't presented to the crowd and television audiences as fastest qualifier, although he had no argument with Bright being awarded pole position.

"When you go out and do the shootout the expectation is that the person who is quickest gets the glory at that moment, so it all fell a bit flat and you had half the audience confused and saying 'hang on, Lowndes just went quickest'," he said.

"I take nothing away from Jason Bright's right to pole position but just at that moment the centre of attention should be Lowndesy."

Lowndes said starting from third position was still a good result for what he forecast would be an extremely tough race.

"I think this afternoon will be really gruelling on the drivers," he said. "The guys in the pits will also be working bloody hard looking at fuel consumption, tyre wear, lap times, where we are going to overlap and undercut people.

"All that will be going on this afternoon and that is going to make or break your race."