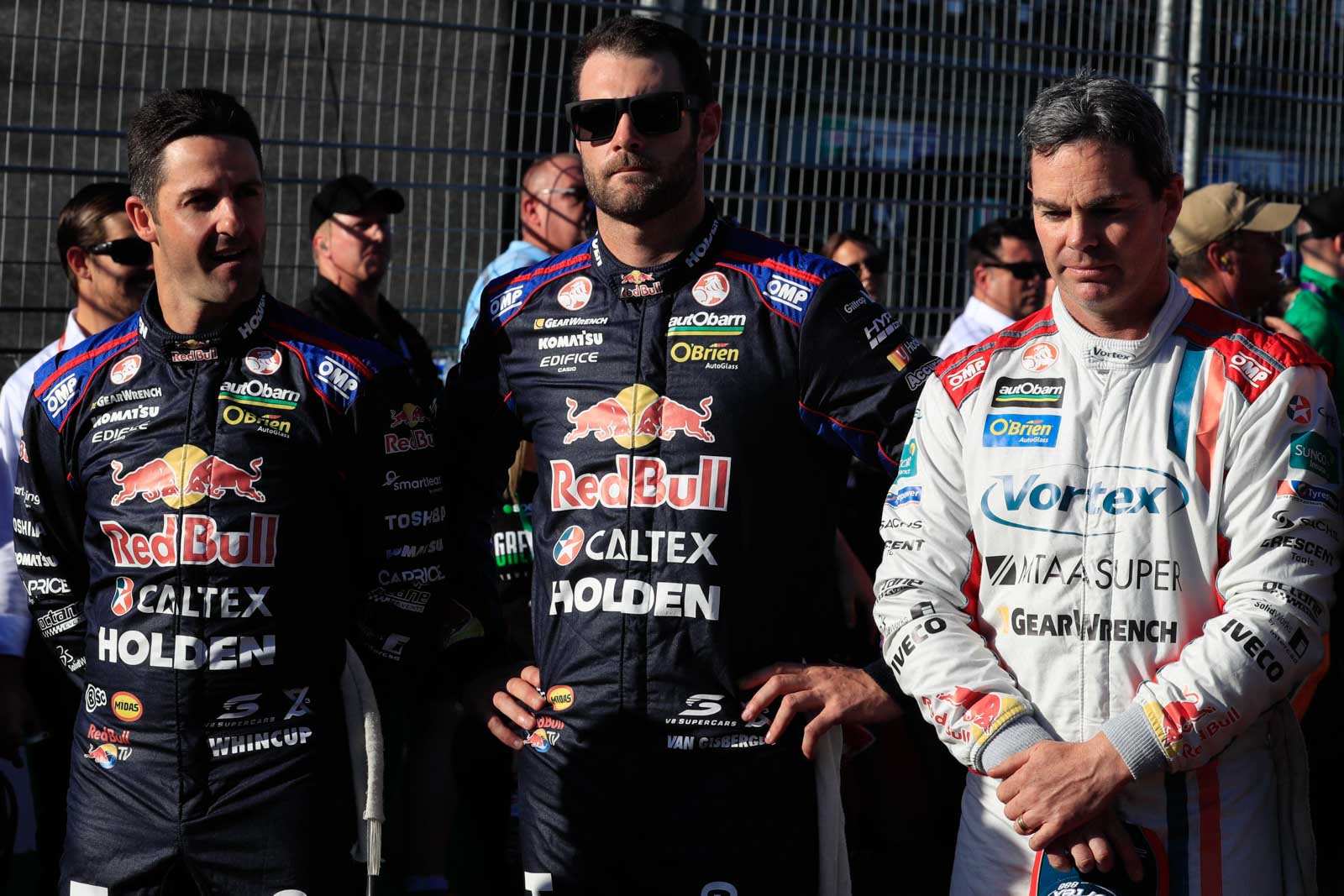 The 27-year old Kiwi van Gisbergen has a 191-point buffer with 300 on offer over the weekend, meaning he could stitch the title up after the first gruelling 250km race if Whincup strikes drama.

Finishing second to Mark Winterbottom last year at the last round, and to Whincup a number of times, Lowndes knows all too well what it’s like in this last week with the finale awaiting.

Whincup and van Gisbergen have said they would work as teammates until the end, but Lowndes cast doubt on that statement, stressing how intense Saturday would be.

“We all say that, but at the end of the day we strap the helmet on put the visor down – you’re there to win races for yourself and for your crew, and the Saturday will be the pressure cooker,” the TeamVortex racer said.

“Saturday will set the scene for what the weekend looks like – if Shane’s able to finish Saturday’s race with 150 points it’s a foregone conclusion, but I have no doubt Jamie will be pushing hard to close that gap if at all possible.

“The interesting thing is having pit stop races again – double stacking will be an issue. I’m sure both of them will want to be that lead car so they’ve got pit priority.

“All that will come about on the Saturday, which will make it interesting for everyone to sit and watch.”

Both drivers have strong records at the Sydney Olympic Park circuit – between them they have won the last eight races there.

“There’s no doubt both of them will be extremely fast around Homebush,” Lowndes said.

“It’s a circuit they both enjoy, it’s a circuit you have to be aggressive with, like Gold Coast, and I think both their styles suit.

“Jamie has nothing to lose in the sense he pretty much secures second, so his only benefit is to go out there and drive at 110 per cent – and if he can pressure Shane into making a mistake things will change.

“But for me looking in, I think Shane’s a bit more mature now, he’s fast, he just needs to circulate if he can’t win the race – no doubt he’ll try and win it anyway – and he might score enough points for the championship.”

“It’ll be Grant’s first championship as well – he’ll be driving the car as much as Shane will be in the sense that he’ll be trying to nurture it along and get him to finish the races.

“For Shane, it’s not about winning it’s about finishing, and whether he takes that approach – that’s up to him – but he’s in a healthy position at the moment going into the last round.”

The exciting thing, though, is neither driver is known for taking a conservative position. They are both programmed to win at all costs, so it’s anyone’s guess what could happen when you throw in concrete walls, Sydney weather and a huge prize to play for.

“They race very hard and fast – if New Zealand was the final round, I don’t know if Shane would’ve let Jamie go,” Lowndes said, referring to Whincup’s pass last round that made contact and spun van Gisbergen off track.

“They’ve both got that mentality of ‘win races’, of wanting to take a championship on a win. Homebush is a very unforgiving track and you’ve got to have respect for it.

“It’ll unfold, I reckon, in the way of Shane. He goes into the weekend with a healthy point gap and he’s done a great job this year.”

Lowndes is in a battle of his own for third place with Scott McLaughlin, which is not insignificant because it would secure Triple Eight a one-two-three – the first time a team would achieve the feat in Australian Supercars history.