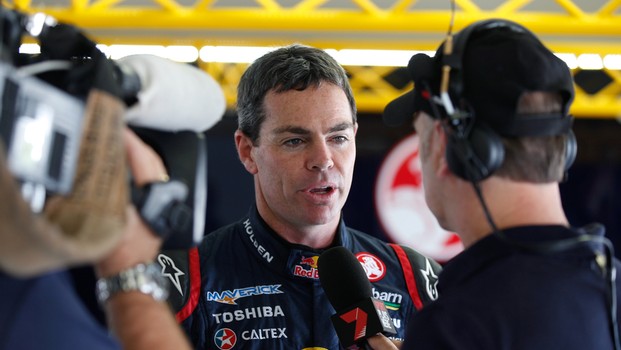 Craig Lowndes believes the mentality of thesport has changed since he started driving touring cars in the mid-1990s.

Now with the most wins in series history, and having moved to second in the Championship, the Red Bull Racing Australia driver spoke of theyoung guns in the series and the talent he has seen come through the V8Supercar ranks.

How does he feel when he sees young guyslike Scott McLaughlin win his first race, and Chaz Mostert debut with a top 10finish?

Looking back on his first race win for V8Supercars.com.au,the 38-year old said he was fortunate to have had the chance to drive for a factoryoutfit so early in his career.

“It was great – I was lucky enough ina sense that HRT (Holden Racing Team) gave me an opportunity to drive,” Lowndessaid.

“And I know – even for back then – thesponsors weren’t too pleased about that. The team was giving this young kid theopportunity to race a $500,000 car – but it paid off. It paid dividends.

“I think the category’s mentality haschanged a little bit now – I think all teams have been able to give youngpeople like Chaz an opportunity to showcase what they do and how they do it.

“There’s some great talent here, and Ithink the stepping stones through Formula Ford and even the Development Seriesto our series is a great progression that allows these guys to develop andunderstand.”

Lowndes believes McLaughlin – who hasbeen compared to the three-time Champion after his first win – is the real deal.

“I think Scotty McLaughlin – and Chaz now– but Scotty really is the showing factor of that, coming out of theDevelopment Series as someone who has won and now stepped into our series.

“We’ve seen past Champions come into ourseries and struggle – so now Scotty has stepped up again and it’s showed itworks and that the Development series has given him sound grounding andunderstanding.

“He’s a talented kid, so there’s no justputting that aside.

“It’s been fantastic seeing the nextgeneration come through.”

When McLaughlin won his first Championshiprace with Fujitsu Racing GRM in New Zealand, he became the seventhdriver to record his first ever win with Garry Rogers Motorsport.

While, as Lowndes said, some teams may havebeen hesitant to take on young, unknown drivers, team owner Rogers has alwaysgiven young guns – including Garth Tander and Jamie Whincup – the opportunity to make a name for themselves in V8Supercars.

“I look at the drivers pretty much the sameas everyone we employ,” Rogers said.

“I think you’ve got to have people who arecommitted to what you have to do. Sure the driver has to be able to drive, butthere are lots of people who can drive.

“You’ve got to make sure you pick guys whocan drive really well but also make sure they’ve got the other attributes thatsuit our team.”

With a background as a horse broker, Rogerssaid he adopted the philosophies he learned in those days and applied them tomotor racing.

“For me, they (young drivers) will have afew accidents – but experienced drivers have accidents too.

“And you’ve just got to make sure of the encouragementyou give them. They have to be accountable for their actions, as we all do…

Scott McLaughlin  ›
15' Wilson Security Racing GRM ›
15' Red Bull Racing Australia ›
Stay In The Know
Sign up to the Virgin Australia Supercars Championship Newsletter
This website uses cookies to improve your user experience. By continuing, you will be providing your consent to our use of cookies.Ok