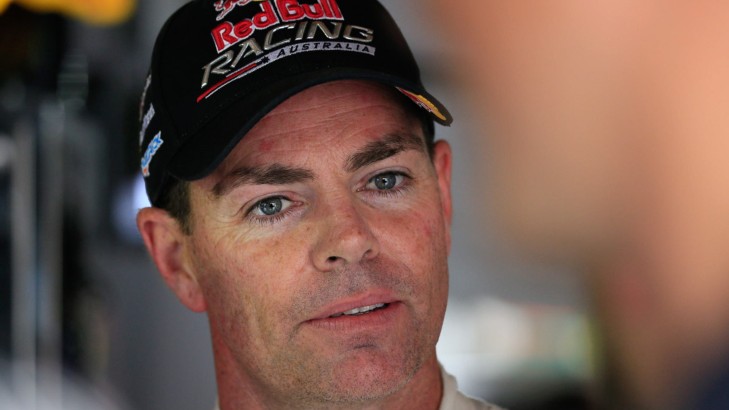 The Red Bull racer and fan favourite took 141 points out of 'Frosty's' lead - more than he was expecting - and feels in form with three rounds to come this season.

"It's definitely alive, there's no doubt about that," Lowndes told v8supercars.com.au.

"We'll just keep pushing on and do the best we can and if we can keep pressuring them, and we can get them to make more mistakes, that's even better."

Coming off a fourth place finish yesterday and third on Saturday, Lowndes and Steven Richards were front-runners on the Surfers Paradise street track. Lowndes was surprised how strong compared to his main title rival.

"I'm excited - I think the aim was to chew into Frosty's lead 100 points each round which we've done more of that this weekend than I expected," he said.

"You never know coming out of the Gold Coast what to expect in a sense of how straight the cars are going to be and what's what.

But for me I'm pleasantly delighted with our results regardless - not winning, but to be able to finish a third and a fourth, be in front of Frosty both times and score points with that, that was the aim of the weekend."

With Winterbottom's lead - which is still 258 points, with 300 the maximum that can be earned in one event - Red Bull needs Prodrive to make a mistake.

But Lowndes and his crew will do the absolute best they can in hope the gap can be bridged.

"The more pressure we can put on any team, hopefully expose some of the cracks," Lowndes said.

"They had a terrible run (Saturday) with the pit release, but I was expecting more competitive pace out of them ... I don't know exactly why they ended up 11th but they definitely had pace at the start of the race.

"So all we can do is focus on our side of it, try and win races if we can. If not we need to finish in front of them and keep eating away."

While Prodrive has been consistent front-runners this year with Winterbottom, David Reynolds who sits third, and Chaz Mostert who sits out from injury, the team has buckled under pressure in the past.

Lowndes believes they will bounce back to their usual form at the ITM 500 Auckland - an event Winterbottom won last year and left with the prestigious Jason Richards Memorial Trophy.

"They've been consistent and fast all year - they'll go away and I'm sure, no doubt, that they'll get ready for Pukeokhe," Lowndes said.

"They were fast there last year, no reason they can't be fast there again this year, so I think it's more a blip on the radar. You'd like to think it was a bit more, but we'll see what New Zealand brings.
"It's also been a circuit for me that hasn't quite gone to plan from time to time either so really I'm looking forward to getting there and more confident now after having Bathurst and this weekend out of the way.

"This was in a sense, not a bogey round, but a round I've has mixed results at and we've had a strong car so I'm really looking forward to going to New Zealand."

Craig Lowndes  ›
15' Red Bull Racing Australia ›
Stay In The Know
Sign up to the Repco Supercars Championship Newsletter
We use cookies to ensure that we give you the best experience on our website. If you continue to use this site we will assume that you are happy with it.Ok