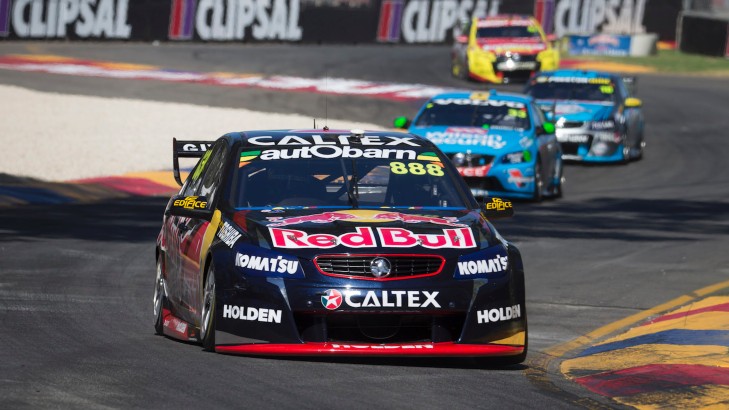 Fan favourite Craig Lowndes appears set to drive for Triple Eight Race Engineering for the rest of his V8 Supercars career after signing a new two-year deal with the category's dominant team.

The new contract, which locks in Lowndes' future with the team until the end of the 2017 season, was announced yesterday along with T8's decision to add a third car for 25-year old New Zealander Shane van Gisbergen from 2016 and the extension of its naming rights sponsorship deal with Red Bull out until at least the end of 2017.

There had long been speculation about van Gisbergen joining T8 from customer team Tekno Autosports, but there had also been question marks over whether Lowndes would be retained - especially once six-time V8 Supercars champion Jamie Whincup was re-signed over the summer by team owner Roland Dane on a new three-year deal.

Even last weekend at the opening round of the championship, the Clipsal 500 in Adelaide, Lowndes' future in the team did not appear secure.

But during an extended interview Dane told v8supercars.com.au that he hoped Lowndes would complete his driving career with Triple Eight and that this new contract was not necessarily his last with the team.

"I don't want him to go anywhere else, I would like him if possible to spend the rest of his time with us and if we can engineer the situation in such a way that he can then that is what I want to do and that is what we have endeavoured to do," Dane said.

Now 40, Lowndes joined Triple Eight in 2005 and since then has finished second five times and fourth five times in the title chase, but never added to the three championships he won at the Holden Racing Team in the late 1990s. He has also recorded four of his five Bathurst 1000 victories since joining Triple Eight, three with Whincup and one with Mark Skaife, the last time in 2010.

While he has been outpaced by Whincup, there is no doubting Lowndes is still amongst the fastest drivers on the grid and undoubtedly the most popular driver in the category, counter-balancing the mixed public views of his all-conquering teammate.

Dane said the decision to expand to three cars was driven in part by the number of high quality drivers that had driving contracts due to expire at the end of the 2015 season. While Whincup, van Gisbergen and Lowndes are now locked away, Fabian Coulthard, David Reynolds and James Moffat are still available and Scott Pye, Cam Waters and Tony D'Alberto are all knocking on the door looking for seats.

"It's not often you get the opportunity to employ three of the absolutely best drivers in the category, including one driver who has been with us longer than anyone and we would like to continue that relationship, while we also build for the future. So it is a unique set of circumstances in terms of availability and Craig wants to carry on with us and we want to carry on with Craig.

"At the same time we want to make sure we have a long term policy of going for the next generation. So we wouldn't have done it if Jamie, Gizzy and Craig weren't all available and happy to drive for Triple Eight."

Dane said van Gisbergen's speed and desire to jump in anything and drive fast reminded him of Lowndes.

"I like his approach and in many ways he is like a 15-year younger version of Craig Lowndes."

Dane said he was also encouraged by signs van Gisbergen is growing up, something exemplified by his decision to redress his pass of James Courtney for the lead of Race Three at the Clipsal 500 last Sunday.

"Gizzy has ... started to show some real maturity under the guidance of (Tekno Autosports team manager) Steve Hallam in the last 18 months particularly."

Dane said signing van Gisbergen and re-signing Whincup meant he had secured the two fastest drivers in the championship.

"I firmly believe those two guys are the fastest two guys in V8 Supercars and that's why I want them in this team."