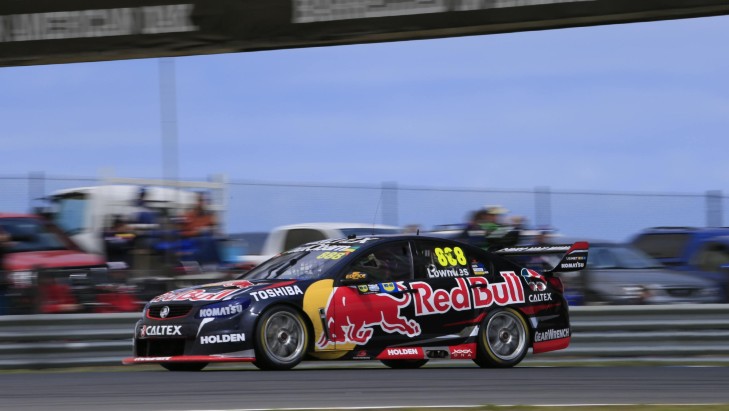 However the three-time champ will not be giving up without a fight and vows to push his Ford foe to the end, after putting on an impressive performance across the Phillip Island weekend and lowering the margin from 240.

Saturday in Sydney is critical - two races around a concrete-lined circuit, worth 75 points each. The title could be won on Saturday - or become a very close fight coming into the 250km run on Sunday.

"To be honest, it all depends on Saturday's race," Lowndes said when speaking about the Championship battle.

"Every race that goes on from here on in - if we can get it below 150 points we're a chance for Sunday.

"It really is a championship for Frosty to lose, with a 179-point lead. As long as he drives smart, clean and keeps out of trouble he should have enough of a points gap to walk away with that number one.

"But we won't stop fighting until the chequered flag on Sunday."

The Red Bull racer was hoping to leave this event with a 150 to 170-point gap and always knew he would need to chip away to take the title, given Winterbottom's position this year.

Lowndes has won the title three times - the most recent in 1999 - and had some words of advice for his competitor.

"He just needs to do his own thing and stop overthinking things - they've been fast all year, there's no doubt they will be fast there [Sydney].

"It's a matter of them just running their own program."

It isn't just the drivers championship up for grabs at Sydney - Red Bull is chasing down Prodrive for the teams championship, which offers both prestige and pit lane position.

"We'll just keep fighting, we're not going to give up yet - we've still got two things up for grabs," Lowndes said.

"Both Jamie and I are focused on teams championship - I know Roland [Dane, team boss] is.

"Again, we've got to see where we qualify, it's not going to be handed to us, we've got to ... do what we did this weekend and try and qualify up the front."

Lowndes had a nasty crash at the Homebush finale last year that left him with injured ribs when he was fighting Winterbottom and Shane van Gisbergen for second place. But all in all he believes the Sydney circuit has been good to him. He has recorded two wins there, most recently in 2012.

"I think we've had a couple of wins there and in the past it's been kind to us.

"It's a street circuit so we know that it's high risk at times - you've got to put everything on the line and like the Gold Coast, if you come back with your side mirrors you're not trying hard enough."

Title fight down to Sydney