Lowndes Holds on in Darwin… Just 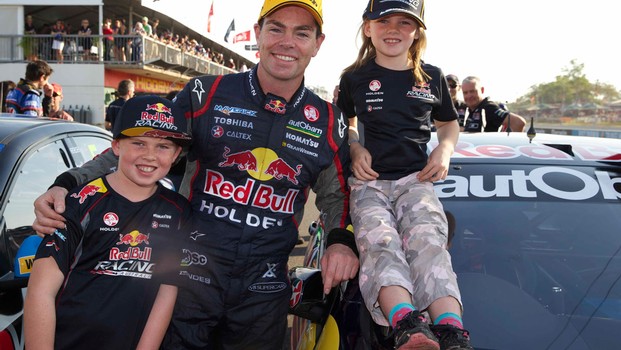 In what became a timed finish after a massive seven car pileup in the third and final race of the weekend, Lowndes admitted he could not have held on for a single lap more as Pepsi Max FPR's Mark Winterbottom hunted him down at the end.

"With all the accidents and safety cars that went on at the start of the race we knew it would be a reduced race," Lowndes said. "We thought we could push on but we pushed it a bit hard. We burnt the rears up quite quickly and with that Frosty pounced.

Winterbottom had already won a race when he took the middle contest quite easily, and was then within a lap of a double as Lowndes' tyres wore thin.

"I thought he was just maintaining position like you do," Winterbottom said. "I expected Craig to up the pace again but it was nice to see our tyre life at the end and the fact we were able to push on.

"We have obviously got good pace on the new tyre and good pace at the end. You have just got to marry it together."

Lowndes now passes Mark Skaife with 92 career wins to his credit. He also creeps to within 159 points of Whincup – penalised for spinning his wheels at a pit stop – in the Championship.

"You get a little down on yourself when you see that gap growing but today proves we can bounce back. It's nice to go away from here on a positive note," Lowndes said.

"The Championship is never over until it's over. You are always going to have ups and downs."

A massive pileup at the start of the final race led to a full restart and seven cars out of the contest; as well as a massive damage bill.

It was difficult to assess how the carnage began but it appeared some push and shove midpack started the trouble which left Tim Slade (Heavy Haulage Racing Australia), David Wall (Wilson Security), Alex Davison (Jeld-Wen), Lee Holdsworth (Irwin), James Moffatt (Norton), Dean Fiore (Dodo Insurance) and Alex Premat (Fujitsu) out of the race and in the medical centre.

All drivers escaped injury following the mass crash but the same couldn't have been said of the cars.

Reynolds nabbed the lead from the restart before Lowndes dived into the pit early. When Reynolds pitted soon after, a quick stop by Lowndes allowed him to jump his lead partner. So too did Whincup with a lightning quick stop which earned him three places.

But as he has done before Whincup spun his wheels on marginally as he was set back down, which is illegal under the rules. Whincup got the mandatory pit lane drive through as a result. It was an unfortunate result for the clear Championship leader.

Holden Racing Team's James Courtney's excellent weekend ended iunfortunately with what appeared to be an electrical problem when the car stopped dead on the side of the track. He could not restart and the safety car was called for a second time in the reduced race.

Having won the middle race, Winterbottom was glad to have the statistic of a race win for 2013, but wasn't feeling that happy after the day's first race, number 18 in the Championship.

The SKYCITY Triple Crown has been a tumultuous weekend for the Pepsi Max Crew racer, who was quickest in Friday Practice, but had a shocker of a day yesterday, shoving teammate Reynolds off the road.

Keeping that all in perspective, Winterbottom said after that race that it was hard to feel happy with that win – particularly given there was less than two hours between the finish of the second and third races.

The V8 Supercars return to the track for the Sucrogen Townsville 400 from July 5-7.

David Reynolds  ›
15' The Bottle-O FPR Ford ›
15' Pepsi Max Crew ›
15' Red Bull Racing Australia ›
2013 SKYCITY Triple Crown  ›
Stay In The Know
Sign up to the Virgin Australia Supercars Championship Newsletter
We use cookies to ensure that we give you the best experience on our website. If you continue to use this site we will assume that you are happy with it.Ok