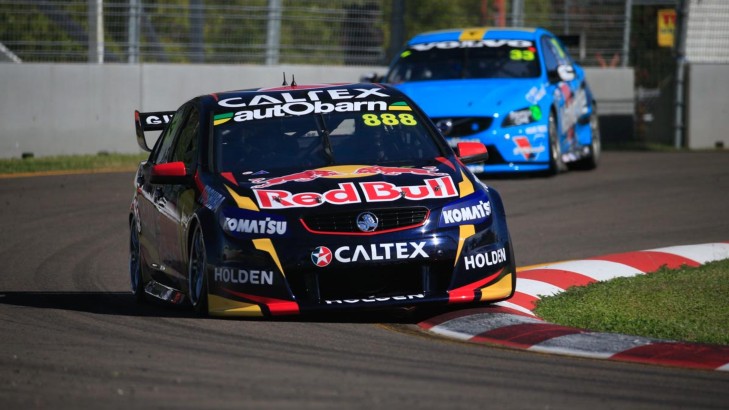 Red Bull Racing's Craig Lowndes has emphatically bounced back from yesterday's disaster, setting the fastest time in qualifying and buying a ticket to the ARMOR ALL Top 10 Shootout.

Lowndes was involved in a number of incidents at the Castrol 500 -Driven by TAFE Queensland yesterday, that have seen him penalised, and was in doubt to contest the second race after substantial damage to his Holden Commodore.

But he has put the drama behind him and beaten teammate Jamie Whincup in the 20-minute session by 0.1045sec, meaning he will be the last driver to take to the circuit for the ultimate one lap dash for pole.

Grid spots are set for the remainder of the field, Mark Winterbottom once again failing to latch onto the leaders, in 12, Fabian Coulthard suffering reported throttle and engine cut out issues, in 14 and Michael Caruso leading the Nissans in 16.

Craig Lowndes  ›
15' Red Bull Racing Australia ›
2014 Castrol Townsville 500 – Driven by TAFE Queensland  ›
Stay In The Know
Sign up to the Virgin Australia Supercars Championship Newsletter
We use cookies to ensure that we give you the best experience on our website. If you continue to use this site we will assume that you are happy with it.Ok