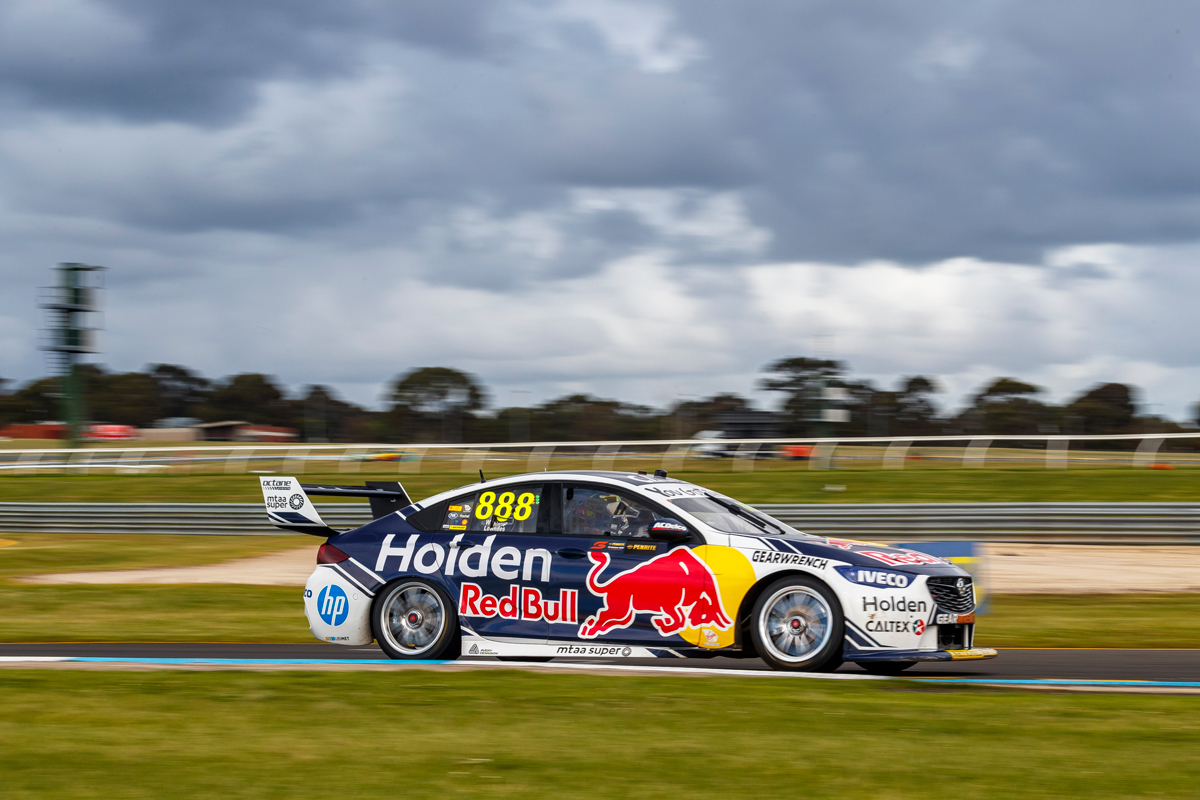 Craig Lowndes has beaten Will Brown to victory in an action-packed co-driver sprint race at the Penrite Oil Sandown 500.

Lowndes launched off the startline to blast by polesitter Alex Premat, giving him the chance to get clear of the chaos that would unfold behind.

Lowndes’ 109th career victory gives primary driver Jamie Whincup the ideal starting position for the second 20-lap sprint race of the afternoon, which will set the grid for the 500km Sunday race.

“We said at the start of the race, it doesn't matter where we get off the line, just keep it clean, let’s get on with it,” said Lowndes.

“It's only a short sprint race of a bigger picture.

“The start was mega, we just got off the line and the first four or five laps the car started to come to us.”

Fullwood did a terrific job to hold onto his Kelly Racing Altima and stay fifth, soon setting the fastest lap of the race and finding a way by a fast-starting Brown.

The Penrite Racing youngster turned out to be one of the stars of the show as conditions worsened, moving from fifth up to second by the chequered flag, 2.5941 seconds behind Lowndes.

Brown and Fullwood both passed a struggling Premat on the pit straight; Fullwood would then have a scary moment spinning 360 degrees at the exit of Turn 3 but somehow recovering to keep fourth position.

Brown then pressed on to move past Tander with a bold move into Turn 1, going on to clinch his maiden Virgin Australia Supercars Championship podium.

“I didn't know what was going to go on, it kept raining and then drying,” said Brown, who earned praise from Whincup.

“At the start I was probably pretty conservative, I thought you know we're not in a bad position here, we're fifth, I'd take that.

“The car was awesome, I can't thank the team enough, because we just picked one off at a time and front-row start for Anton [De Pasquale] arvo, so it's great.”

Tander would remain third, ahead of Fullwood and Thomas Randle, who impressed in driving forward from 11th.

Randle survived contact with his Tickford Racing teammate James Moffat, who ended up in the garage with damage to his #55 Mustang.

Moffat ran wide at Turn 1 on lap 15 while in combat with Randle and Premat, and slid into Randle on return to the track.

Moffat was sent spinning into the grass, and then on return to the track fired into the wall at Turn 4 with steering damage; eventually limping back to the pits.

"Premat, I got up the inside of him at Turn 6 and now because there's a mile of run-off he's just bailed off," Moffat fumed.

"He shouldn't have been in front of me in the first place. And then I've just ran a bit wide, I was at Turn 1 exit and he's just given me no room and clipped the left front. I don't know what else to say."

Fullwood meanwhile took no credit for his 360-degree spin, declaring it a lucky escape.

"It wasn't planned, as I'm sure you're all aware and there was certainly no skill behind that, that was a lot of luck," Fullwood said.

"Certainly not the kind of driving I'd like to display, but very fortunate that I was able to stay out of everyone's way and keep it off the fence and keep going.

"I think we had quite a lot of speed, but just way too radical.

"I was having a pretty good race with Will [Brown] until I had one of my 15 moments and then he pulled away."

Premat ended up sixth, ahead of Luke Youlden, Michael Caruso – who made up seven places – Richard Muscat and Alex Davison in 10th.

Ash Walsh and Jack Smith were among those to run off the track and ended up the last two in the running order, 23rd and 24th respectively.