Craig Lowndes admits he was “annoyed” to have to hand fourth place in the opening leg of the WD-40 Phillip Island 500 back to Triple Eight team-mate Shane van Gisbergen.

The pair shared the second row of the grid for the 250km contest, with van Gisbergen maintaining third off the line but Lowndes losing a place to David Reynolds.

Van Gisbergen was unable to go with leading pair Jamie Whincup and Scott McLaughlin due to intermittent power steering problems, and also lost third to Rick Kelly during the first round of pitstops.

In the final stint, Lowndes made his way back past Reynolds and closed on van Gisbergen, who had Kelly a further 2.5 seconds ahead.

Lowndes was cleared to switch places with the ailing van Gisbergen and launch an attack at Kelly, let through on lap 52 of the 57 and then closing to within a second of the Nissan.

Unable to make any further inroads, though, Lowndes was instructed to let van Gisbergen back past, which he did on the last lap.

“We worked really hard in that race,” Lowndes said.

“The car wasn’t perfect in the beginning, we made an adjustment to the car during the first stop, which was going to be the longer of the two.

“The car got better as the race went on, and the grip came on the track.

“We’ll debrief about it, I’m annoyed about it because we were able to pull away from Shane and we had good pace.

“We just didn’t have enough to get to where we needed to be, which was put pressure on Rick. But then the call was made.” 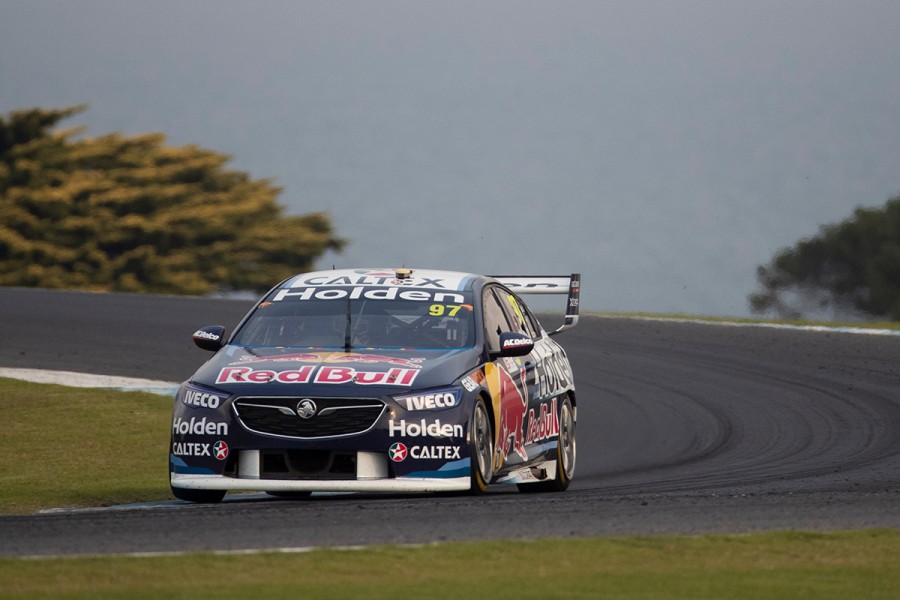 Van Gisbergen indicated Lowndes had been let past on the proviso the positions would be switched back if he couldn’t snatch the final podium place from Kelly.

“I was catching Rick at the end and Craig was catching me and I would have been able to have a go at Rick,” van Gisbergen said.

“But if I went up the inside and had a moment I wouldn’t have known what was going on with the steering, so I let Craig through and they repaid that.

“Craig couldn’t get through on Rick, so they gave the spot back, which is what we agreed on.”

For the second race in a row, following a throttle over-run problem in Tasmania, van Gisbergen had to manage an issue with his Red Bull HRT Commodore.

He said the intermittent nature of the power-steering failure made his life more challenging than if it had given up completely.

“That was the problem right from the start, second corner I felt it and then it failed completely,” he said.

“I’d be all locked up into a corner and then it would just keep going in and out which was the hard part, if it failed then it would be a lot easier.

“It’s a shame we’ve had a few issues this year on our car, but we’re still getting good points and if we tidied it up we’d be fighting for the wins.”

After the ninth race of the season, van Gisbergen and Lowndes are fourth and fifth in the championship.

They are 59 and 89 and points behind leader McLaughlin, who holds a single-point advantage over Whincup.