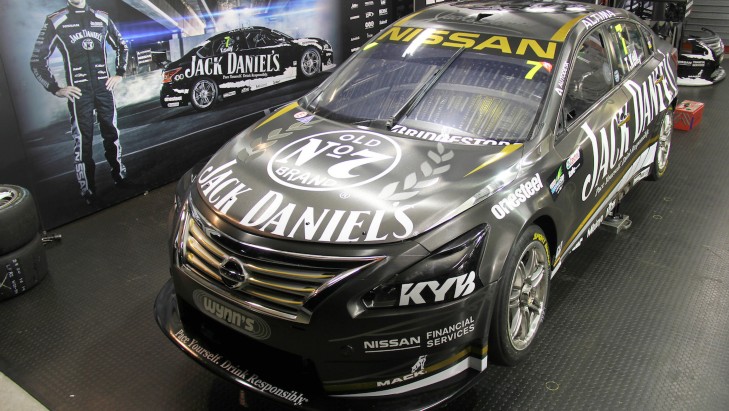 Ahead of today's final race of the Castrol Townsville 500 -Driven by TAFE Queensland, the two Jack Daniel's Nissan Altimas of Todd and Rick Kelly have been wrapped in a one-off scheme in tribute to the brand's milestone.

Following on from the opening pair of races for the weekend, both of the Jack Daniel's Racing Nissans were stripped down to plain black painted metal, before being completely wrapped in a black brushed aluminium base layer, with final signage then applied to create a striking effect.

"It's pretty cool what you can do nowadays with having one car (for) one race day, and having a completely different one on the next," Todd Kelly said.

"We've done it a few times in the past, it's a big job for the guys, and there wouldn't have been a lot of sleep between them last night.

"It's so cool to be able to do this for Jack Daniel's 300th race, to roll out with two brand new liveries today is pretty special.

"The cars look unbelievable, so I can't wait to roll out of pit lane and see what the reaction from the crowd is."

Having started its V8 Supercars sponsorship in 2006, the design tips a hat to early Jack Daniel's liveries through the white stripes on the side of the car, while the gold accents are a throwback to the one-off Bathurst 2012 scheme. The car is also carrying a special 300 race logo on the roof and door pillars. 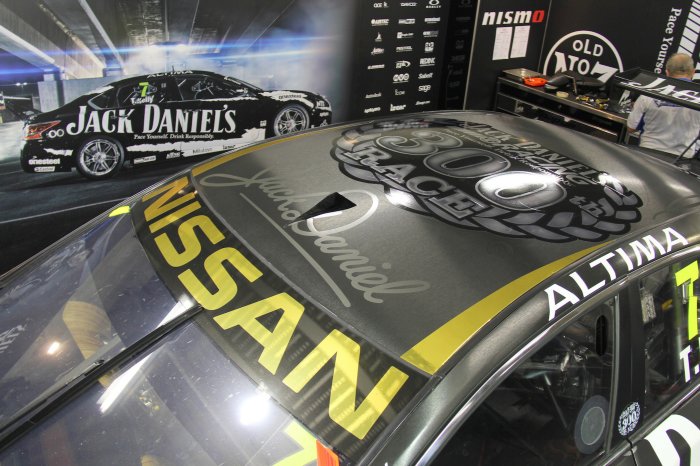 "It's always a bit of a nervous one, changing the livery of two complete V8 Supercars through the night is a tough one," said Rick Kelly.

"We obviously had a lot of work to do post-race to tidy them up and get them ready for the big 250km Sunday race here in Townsville.

"The livery itself is a really exciting one, we've wrapped the car with a brush aluminium black, which is quite new in the graphics industry, and it's a really specialty vinyl.

"We've had some help from Graphics Art Mart, our sign writing partner, and I couldn't be more excited with how the car looks.

"What you can do in that industry is really quite spectacular on a lot of levels, and I'm just really excited that we can celebrate such a big occasion with Jack Daniel's 300th race with such a good looking car."

The V8 Supercars will hit the track for the first time today at 11am for qualifying, with an ARMOR ALL Top 10 Shootout to also determine the starting grid for the afternoon's 250km race at the Castrol Townsville 500 -Driven by TAFE Queensland.

Tander: Holden Racing Team will only get better

Todd Kelly  ›
15' Jack Daniel's Racing ›
2014 Castrol Townsville 500 – Driven by TAFE Queensland  ›
Stay In The Know
Sign up to the Virgin Australia Supercars Championship Newsletter
We use cookies to ensure that we give you the best experience on our website. If you continue to use this site we will assume that you are happy with it.Ok