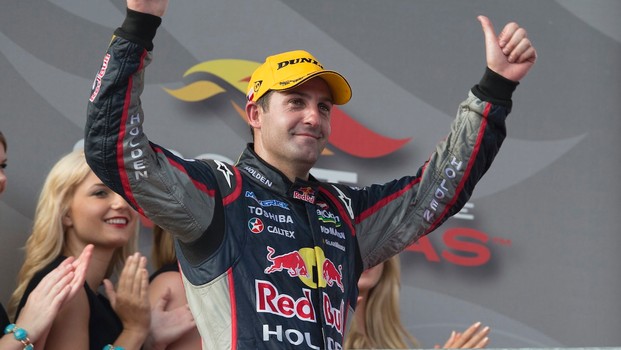 We’re mid-waythrough the Championship and once again Jamie Whincup is leading the points.

The Red BullRacing Australia driver – and four-time Champ – will be online atv8supercars.com.au to answer your questions in a live chat on Tuesday June 25,at 5.30pm AEST.

Whincup iskeen to hear from V8 Supercars followers – in fact, he asked us if he couldparticipate in a chat – so don’t be shy with the questions.

“It’s allopen,” Whincup said. “I’ll give an honest answer and not a fabricated one.

“I’m givingthe fans the opportunity to ask any question they like. If I feel I can’tanswer it – which is unlikely – I’ll let you know, so don’t holdback.”

Whincup encourages questions left of field and is happy to talk about himselfoff-track, as well as what is happening in the racing.

What are some of the things he is always asked about?

“Am I goingoverseas – the answer is no, I’ve got a contract until the end of next year, soI don’t need to talk about that.

“My rivalry withMark Winterbottom – the answer to that one is we’ve been rivals for yearsand that will continue for many years to come. What spiced it up has startedand finished. There was a big peak and it started and finished in New Zealand.It finished when he made a disrespectful move on me in one race, and I squaredthings up in one race.

“He didn’t geta penalty, I did, but I think we both deserved one. Anyway, we’ve moved on fromthat one.”

And after theweekend in Darwin, something else has happened with FPR. As Whincup drovethrough for his pit lane penalty, footage showed FPR Team Manager Chris O’Toolegiving his crew the thumbs up.

“I thought itwas disgraceful,” Whincup said of the reaction to his penalty. “It was a disgraceful act ofsportsmanship. But what goes around comes around – and we’ll sort him out downthe track.”

Despite thefrosty front with FPR, Whincup said if he could choose anyone down pit lane fora co-driver, it’d be mate Will Davison.

“I’ve beensuper lucky to drive with most of my mates – I’m really good mates with AndrewThompson and grew up with the Davison brothers.

“I was able toteam up with Alex in 2004 at Bathurst; Jason Richards was a good mate; and now PD(Paul Dumbrell – the pair won last year’s Great Race).

“Me, Will andPD used to hang out when we were teenagers. PD came to Queensland and got his driver’slicence in Queensland at 16 years of age, and went back to Melbourne. So we hadaccess to a car to get around when he was 16 years old.

“PD was thedriver and we used to hang out all the time – he’d pick us up from school.

“I’ve drivenwith all my good mates, Will’s the only one I haven’t.”

Outside ofracing, Whincup describes himself as loose and chilled out. So there’s a goodchance fans will get a great answer to a question for Whincup on our live chat.

While hecouldn’t recall anything too bizarre that has happened at a race weekend, hementioned teammate Craig Lowndes being asked to autograph a glass eye. “Theguy just popped his eye out!” Whincup said. “So you expect the unexpected.”

What would youask Jamie, given the chance? From his US adventures on and off-track, hisexperiences as a Championship-winning race driver and his opinion on new manufacturers entering the Championship, to being followed around theshops by fans and how he often worries he hasn’t packed his helmet – take theopportunity on the V8 Supercars official website, from 5.30-6.30pm Tuesday June25.

And don’t stressif it takes him a while to respond to your questions – he may be fasteston track, but Whincup is a self-confessed slow typer.

Jamie Whincup  ›
15' Red Bull Racing Australia ›
2013 SKYCITY Triple Crown  ›
2013 Sucrogen Townsville 400  ›
Stay In The Know
Sign up to the Virgin Australia Supercars Championship Newsletter
We use cookies to ensure that we give you the best experience on our website. If you continue to use this site we will assume that you are happy with it.Ok