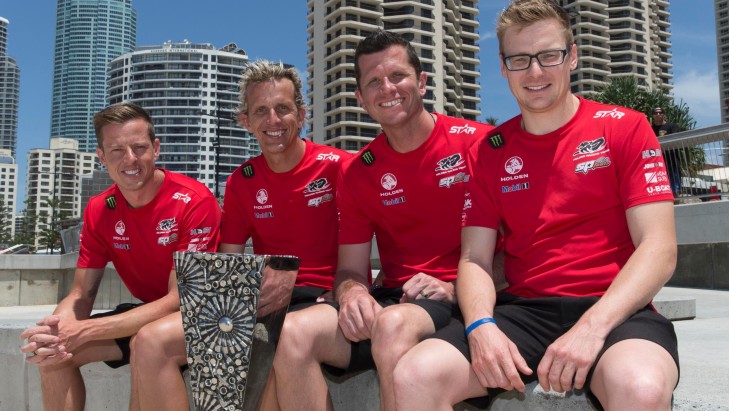 Two of the key co-drivers join Inside Supercars tonight and will be taking your questions from 12pm today.

Jack Perkins earned his first V8 Supercars race win paired with James Courtney after smart strategy on the streets of the Gold Coast on Sunday.

The enduro campaign has been a unique one for Perkins, who stepped up to perform 'primary driver' duties after Courtney was injured, pairing with Russell Ingall instead of the 2010 champ.

On Courtney's return on the weekend, Perkins got the just reward for his extra effort, the #22 crossing the line first after an intense race.

On the other side of the red garage, Warren Luff became the first man to win the Pirtek Enduro Cup twice - in three years - this time with Garth Tander and the Holden Racing Team.

With two podium finishes - including Bathurst - and two fourths, car #2 was the most consistent throughout the endurance phase of the championship.

Send through your questions now for the HRT number twos, who join us from 12pm AEST before appearing on tonight's episode of Inside Supercars.

Also on the show will be segments with Lee Holdsworth and Sebastien Bourdais, a close look at Paul Morris's weekend in the Stadium SuperTrucks and a full wrap of the Castrol Gold Coast 600. Tune in to FOX SPORTS 506 from 7.30pm.

26/10/2015
Related Content
Jack rides the wave  ›
26/10/2015
Tander and Luff Claim PIRTEK Enduro Cup for HRT  ›
25/10/2015
Pleasure and Pain  ›
25/10/2015
15' Holden Racing Team ›
Stay In The Know
Sign up to the Virgin Australia Supercars Championship Newsletter
We use cookies to ensure that we give you the best experience on our website. If you continue to use this site we will assume that you are happy with it.Ok