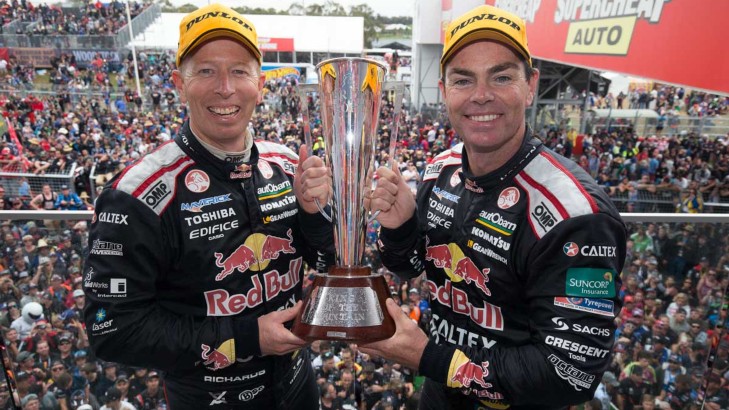 Red Bull's Craig Lowndes and Steven Richards will be online from 12pm today to answer your questions after their impressive Supercheap Auto Bathurst 1000 victory.

The V8 Supercars veterans have cemented themselves in Bathurst history, Lowndes earning his sixth win at Mount Panorama and Richards his fourth.

Lowndes credits a fast car though he knows it wasn't a faultless weekend.

"We had sheer speed," Lowndes said.

"It was great - as the day went on we got faster and both of us were very comfortable in the car."

Yesterday, the fan favourite - who has now moved into second in the Championship, 399 points behind second place finisher Mark Winterbottom - was starting to realise the magnitude of the win.

"It's starting to sink in and the realisation of what we achieved [on Sunday] was amazing," he said.

"To do it with Steve - we've grown up with very similar backgrounds. Steve's dad's raced [Jim Richards], my dad has been involved with race cars as a mechanic and engineer as well [Frank Lowndes].

"So we've known each other, raced against each other for a long time and now to pair up and get our names on the Peter Brock Trophy is really special."

The pair will be on v8supercars.com.au from 12pm today to answer your questions ahead of their appearance on Inside Supercars this evening at 7.30pm on FOX SPORTS 506.

Four-time Bathurst winner Greg Murphy will join Mark Skaife on the panel and take an in-depth look at the week that was the Supercheap Auto Bathurst 1000 tonight.