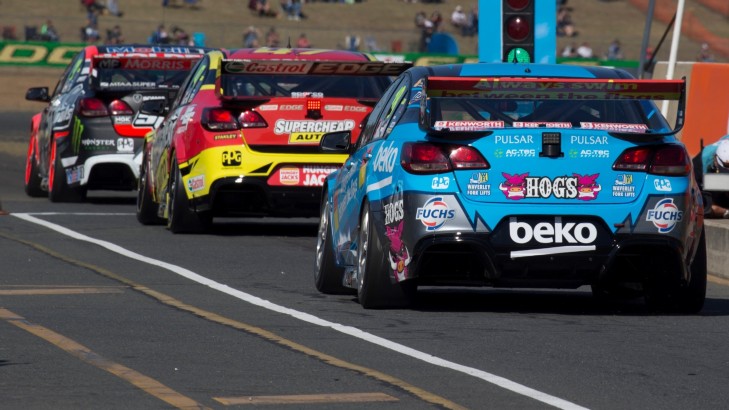 The qualifying set-up that has shown promise for a resurgent Lee Holdsworth in the Team 18 Holden Commodore VF will be the template for the rest of the Walkinshaw Racing squad when its tests at Winton today.

Finding qualifying pace in the MY15 version of the Holden Commodore V8 Supercar has tripped up the season for Walkinshaw Racing, which also comprises the two Holden Racing Team Commodores of Garth Tander and the currently injured James Courtney and the Supercheap Auto Racing Commodore of Tim Slade.

WR managing director Adrian Burgess told v8supercars.com.au Holdsworth's teammates would have to adapt to his set-up if it was proved it would overcome their qualifying woes.

"Our drivers are intelligent but equally they are creatures of habit to a degree," Burgess said.

"They are sensible guys, none of them are stupid. They all want to win so I am sure there won't be any resistance in those cars to trying to drive the car differently if they know and they can see that it can unlock the potential we are after."

The key to Holdsworth's improving results is his preference for a 'pointier' car than Tander and Courtney, meaning he works the front-end harder to go fast.

He and engineer Alex Somerset have elected to revert to the set-up used at the start of the year to qualify in the top 10 for the opening race of the season at the Clipsal 500.

Holdsworth endured a horror run in Charlie Schwerkolt's customer car trying to make new upgrades work for him after Clipsal.

Frustrated with the lack of feel and confidence that set-up delivered, he veered on to his own set-up path at the Castrol EDGE Townsville 400where he qualified in the top 10 on Sunday.

At the recent Sydney Motorsport Park SuperSprint Holdsworth lifted even further, qualifying fastest Walkinshaw Racing-entry and in the top 10 twice. On Sunday mid-race rain denied him an almost certain finish deep in the top 10.

Before SMP Burgess revealed a new "widget" that could potentially improve the qualifying performance of the WR cars was to be introduced at the Sydney track. Afterwards he confirmed it had been used and that Holdsworth and Somerset exploited it best.

"That crew did the best job of making the most of it and now the other crews have got to come to the party as well and understand it and learn how to work with it," said Burgess.

"It's not always possible to design, or engineer or build a driver a car exactly how he wants it and be quick.

"There is a process we obviously have to go through and there will be parts of their driving style that will have to be adapted to get the rest of the lap time out of that set-up."

Burgess said he was confident the lessons learned by Holdsworth could be translated to other team drivers with different driving styles.

Meanwhile, Burgess said there was no connection between the introduction of the 'widget' and a spate of oil line failures for the team that started at Ipswich Raceway and continued at SMP.

"To be brutally honest we didn't do a good enough job of getting on top of it after Queensland Raceway and it bit us again at SMP."

Today's test will take on extra significance because it will be Russell Ingall's first time in car #22, which he will drive at the September 11-13 Sandown 500 with Perkins, replacing Courtney.

It is unknown at this stage whether Ingall will continue his return from retirement in the October 8-11 Supercheap Auto Bathurst 1000 and even the third and final round of the Pirtek Enduro Cup, the October 23-25 Castrol Gold Coast 600.

His tenure will depend on how quickly Courtney recovers from his two broken ribs and a collapsed lung.

French international Sebastien Bourdais will also have his first run with Holdsworth, while the other Walkinshaw cars will comprise Tander and Warren Luff in HRT #2 and Slade and Tony D'Alberto in the SCAR car.

Team 18 revealed a new colour scheme for the Commodore for next week's Wilson Security Sandown 500.