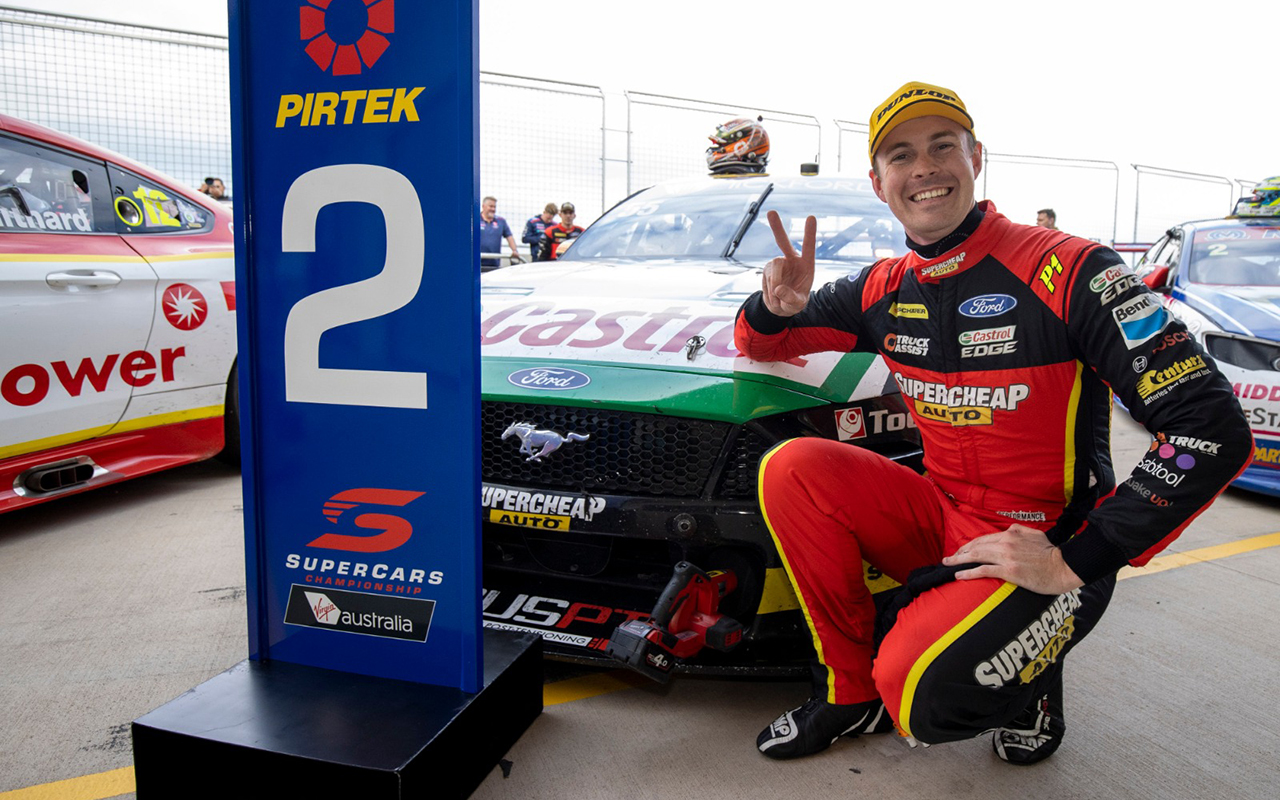 Jack Le Brocq was left with mixed emotions after his second-place finish in the opening race at the Repco The Bend SuperSprint.

While declaring himself stoked with second immediately after the finish, he also admitted to being frustrated that a potential win had slipped away.

The one thing that was clear was the key lesson from his late-race battle for the lead – don’t try and overtake on the outside.

On lap 18, Le Brocq had made an inside pass on leader Shane van Gisbergen at Turn 17, but tried to hang on around the outside at the next corner when the Kiwi completed a criss-cross.

That allowed Fabian Coulthard to demote the Supercheap Auto Mustang to third.

By lap 22 Le Brocq was back in second and challenging van Gisbergen, but opting for the outside at Turn 17 left Le Brocq again hung out to dry and back in third place.

In a radio communication captured by the television broadcast, his usually cool and calm engineer, Brad Wischusen, subsequently yelled: “Jack, not the outside mate, come on!’.

Le Brocq then followed Coulthard through on the inside of van Gisbergen at Turn 1 on the following lap, before trailing the Shell Mustang driver to the chequered flag.

Asked in the post-race press conference about the heated radio call, Le Brocq said: “It was pretty funny, I actually haven’t heard him blow up before!

“I was a bit taken aback by it but no, it’s all good. I think it was rightly deserved.”

When pressed further about the lessons of running at the front of the main game field, Le Brocq added: “The biggest one is just don’t go to the outside.

“I did it twice in a row, you think I would have learnt from the first one, but I’m obviously a slow learner!”

Second at The Bend added to Le Brocq’s win at Sydney Motorsport Park in July – a result which came on a mixed tyre weekend, where strategy played a major role.

After fading to ninth at the finish, van Gisbergen said he worked out pretty quickly that he was in tyre trouble.

“I could sense early on in the race that the tyres weren’t so good, so I tried to drive as slowly as possible in the second stint,” he said.

“The tyres got worse and worse and eventually went away. It was a pretty good battle there at the end - I did my best to hold everyone off, but it wasn’t to be.

“I guess for tomorrow, we’ll keep the qualifying car pretty similar, and in the race, we’ll do what we can to make the tyres last as long as possible.”