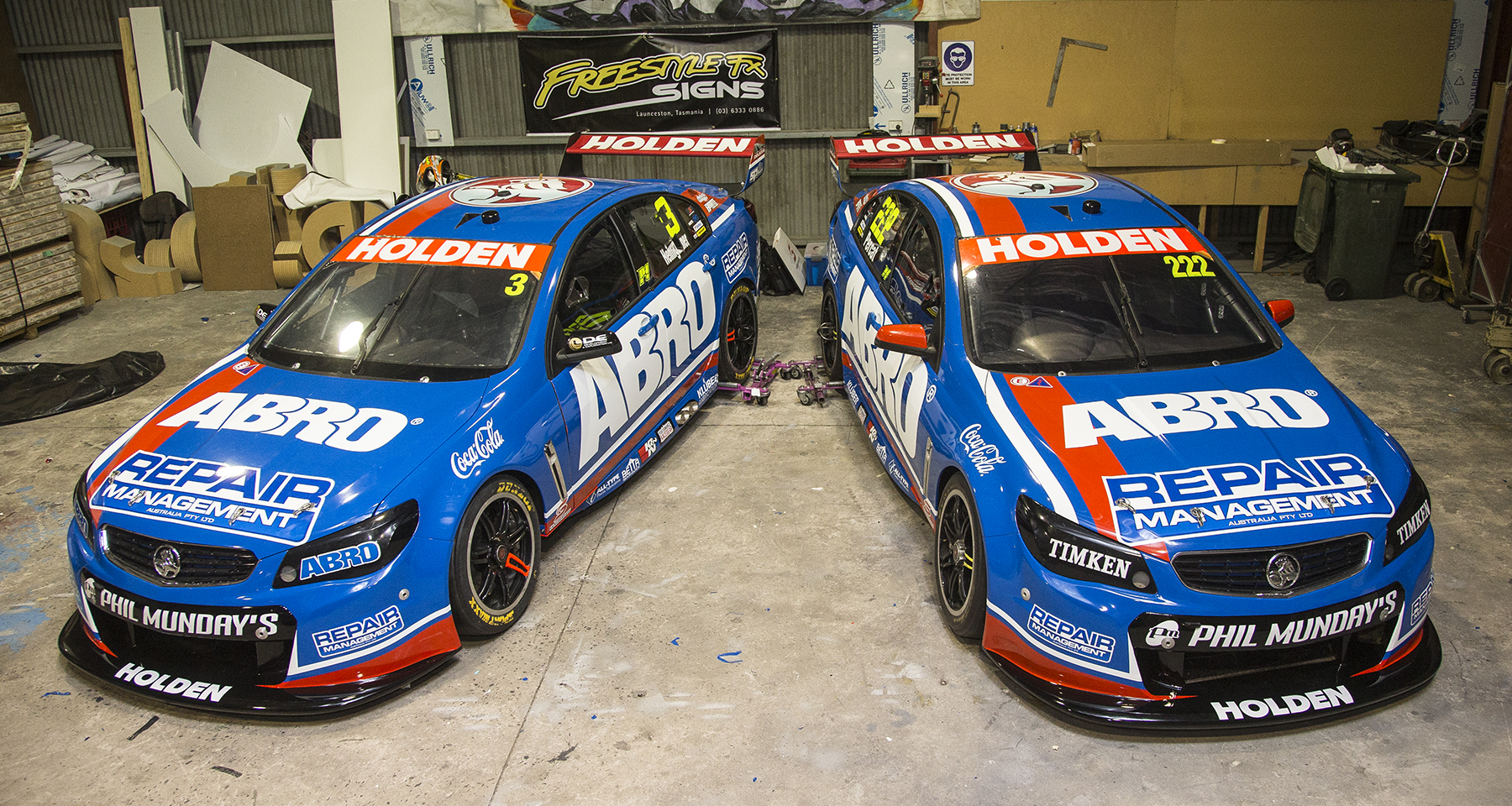 Lucas Dumbrell Motorsport today revealed a fresh new look for its two Holden VF Commodores ahead of the Tyrepower Tasmania SuperSprint this weekend.

Team owner Lucas Dumbrell announced ABRO would partner the Melbourne based team for this coming round only.

Already represented on the rear quarter panels of both cars as well as headlights of the #3 Holden Commodore, ABRO has decided to increase its support and become the major sponsor for the Clipsal 500 Adelaide race winning team.

“Having ABRO increase their support shows that they see commercial value in their involvement with LDM, which is wonderful to see,” said Dumbrell.

“We wanted to continue with keeping the two cars in matching livery and I think the final design will look quite prominent on track.”

“Peter (Hughes) has done a fantastic job and I think everyone will be well and truly impressed with the striking livery, which will adorn both Nick and Andre’s race cars,” said Dumbrell.

A tight four-day turn around after the Formula One Rolex Australian Grand Prix meant the cars were sent across Bass Strait and stickered on the ground in Tasmania.

“The team have worked extremely hard in getting the cars prepped and ready again for this weekend. Due to the constricted lead time, the cars were sent to Tasmania and wrapped over there,” said Dumbrell.

Long time supporter Phil Munday of Repair Management Australia continues his partnership with LDM – the familiar RMA branding will be seen front and centre on the bonnets of both cars.

“Phil has been involved with both myself and the team for five years and his continued support and mentorship has been invaluable in helping to mould the team to what it is today,” said Dumbrell.

Pilot of the #3 Holden Commodore Andre Heimgartner is looking forward to having American-based ABRO as naming rights on the both VF Commodores.

“I think the design looks great and it’s good to see both cars continue in identical livery,” said Heigartner.

The young Kiwi driver is looking forward to getting back behind the wheel at the place he scored his first ever V8 Supercars top 10 finish last year.

“I had quite a successful weekend here last year and it was my first time racing at Symmons Plains, so I’m looking to continue that this weekend."

Teammate Nick Percat is keen to continue his solid run after winning the Clipsal 500 in his hometown of Adelaide.

“The team has worked really hard this year and Lucas and Baz (team manager Barry Hay) have done a great job in recruiting the right staff and are really stepping it up,” Percat said.

“I think the cars look great and I’m hoping we can represent ABRO well on the track.

“I’ve always enjoyed this circuit, the atmosphere is always good and hopefully the new track conditions prove for good racing.”