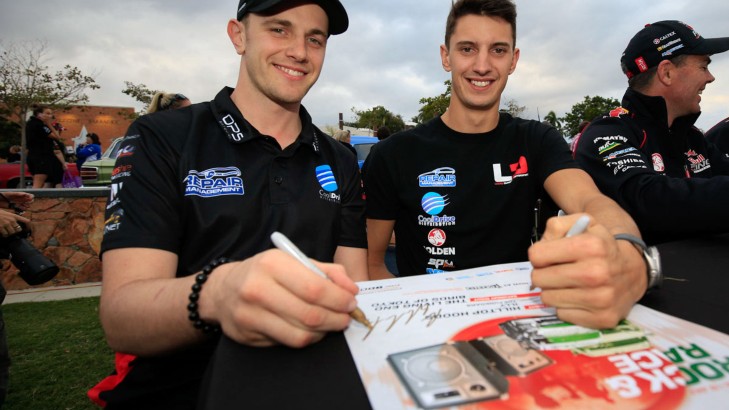 Rising star Nick Percat is a confirmed entry for Lucas Dumbrell Motorsport in the 2016 V8 Supercars championship, but the team has not listed a driver for the second team entry that is currently steered by Tim Blanchard.

Team owner Lucas Dumbrell told v8supercars.com.au the team was keen to retain Blanchard for a second year in 2016 and while the deal is believed to be close, it hadn't been finalised by last week's deadline to enter the team's two Racing Entitlements Contracts (RECs).

"The preference is to continue what we have been doing and retain that continuity," Dumbrell told v8supercars.com.au. "Same drivers ideally, same crew, that's where we are with that one.

As reported last Friday, all 26 currently active RECs were entered by the deadline, meaning the 2016 V8 Supercars grid will grow by one to 26 cars.

Blanchard, 28, has had a challenging first year at LDM in the Cooldrive Holden Commodore VF. His testing and practice time has been limited by a poor bank of tyres and the team has also worked with him on his driving, his physical fitness and mental preparation. He currently runs 23rd in the drivers' championship.

Finishing a strong eighth at the Wilson Security Sandown 500 with Karl Reindler was a breakthrough result, but the duo couldn't replicate that pace at the Supercheap Auto Bathurst 1000, where Blanchard crashed out at the top of the mountain. They will swap to another chassis for the Castrol Gold Coast 600.

The 2007 Formula Ford national champion had a full season with Dick Johnson Racing in 2013 and also partial season or endurance drives with Kelly Racing, Paul Morris Motorsport and in 2014, LDM, as Russell Ingall's co-driver in the Pirtek Enduro Cup.

Blanchard brings backing with him for the family business, CoolDrive, and its ongoing support will play a role in his return.

"He has some sponsorship behind him and he has to work that out himself," Dumbrell confirmed. "Nick (Percat) has got some guys who came onboard with his car in Coates Hire and Morris Finance and so on, and again it's up to them to work out where they are at."

However, Percat is locked in despite the rumours earlier in the year the former Walkinshaw Racing driver might be part of a convoluted swap deal triggered by Shane van Gisbergen's early announcement of his 2016 move from Tekno Autosports to Triple Eight.

Dumbrell said he never doubted Percat's tenure, citing the strong backing of Holden motorsport boss Simon McNamara, who has been a consistent supporter of the team through its sometimes turbulent six year history.

"It's been publicised before, but we have a two year deal with Nick," said Dumbrell.

"Simon (McNamara) is pretty supportive of what we are doing here and from day one he was pretty vocal that Nick is here and that's what it is. Some other guys might have tried to pull a fast one but it wasn't happening."

Dumbrell said he was excited what results Percat, the 2011 Bathurst winner with Garth Tander in a HRT Commodore, could deliver to the team in 2016.

"We just have to make sure we can provide him a car and be there and continue to improve ourselves at the rate he's performing at."

So far this year Percat has claimed a best finish of sixth and runs 19th in the championship. But some reliability issues have cost him results. A steering failure triggered a DNF at Sandown, while at Bathurst the OPS Gateway Holden was only classified 19th after co-driver Oliver Gavin hit the wall after a clash with Will Davison's Erebus Mercedes-Benz.

"We have thrown a lot of results away and they are the ones that hurt," said Dumbrell. "We could have had so much more this year. It's by no means that we are happy as we are still a small team (with limited funding). We want to get to a point where we are well funded, to do that you have to keep going on, year on year."

Importantly, former Stones Brothers Racing/Erebus Motorsport crew chief Barry Hay, who joined the team for 2015 and recruited new staff including engineer Chris Stuckey, will be staying on for 2016.

"We have a multi-year program and he is a good part of it, helping to bridge the gap," confirmed Dumbrell. "The other guys he has brought on this year including Chris Stuckey, have been great additions. Chris helps to have another engineering view. And some of the additions with the mechanics have been great, with the different mix of personalities."

Drivers parade back for SuperFest

Ingall in for Gold Coast