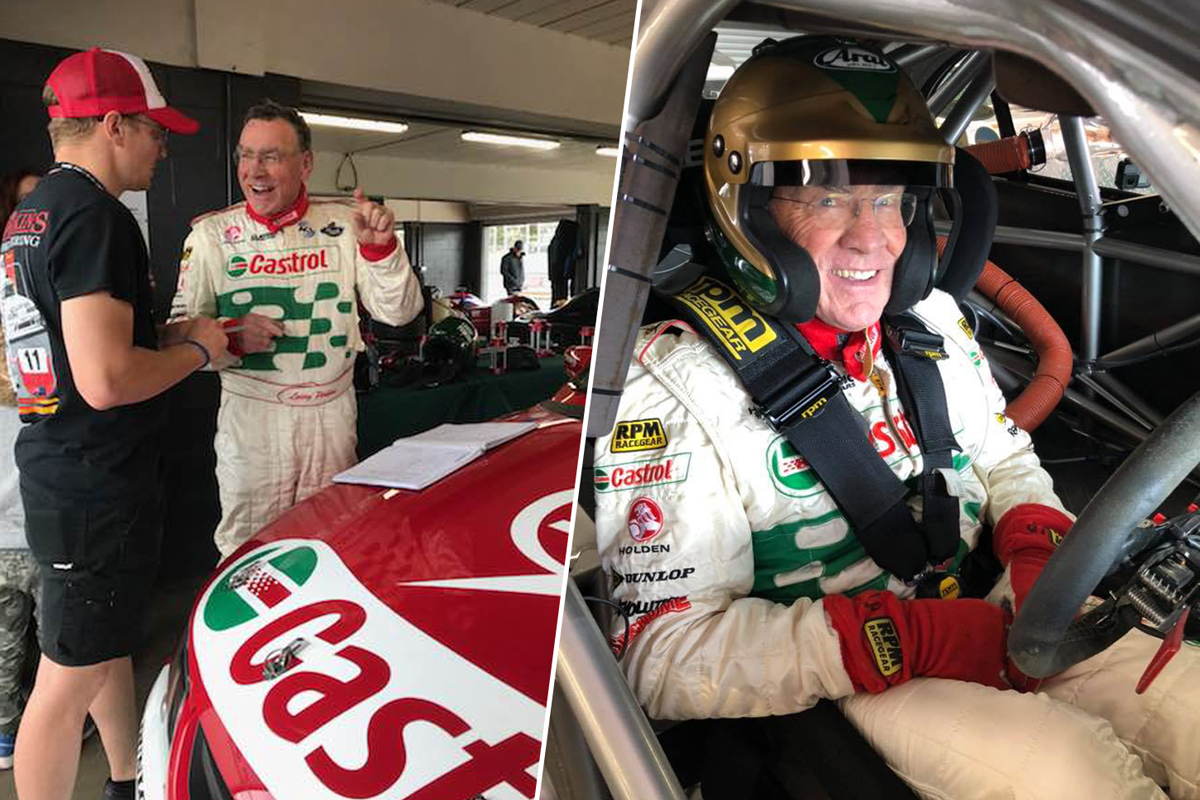 The 69-year-old participated in a series of ‘sprint’ track sessions aboard the Castrol VY in which he tackled his final Supercars race; the 2003 Bathurst 1000, where he finished fourth.

It marked a return for both Perkins and the car, which underwent an eight-year restoration at the hands of son Jack, returning to the specification in which it started that year’s Great Race.

Larry drove in two eight-lap and one 10-lap sprint across the three days at the Phillip Island historic meeting, clocking a respectable 1:42.1595s best – fourth fastest of the 14-car field.

Comfortable behind the wheel, Perkins’ only frustration doubled as a credit to the detail of the restoration; the Bathurst-spec suspension set-up not suiting Phillip Island's two slow corners.

“This was the first serious drive I’ve had since I retired in 2003 and the car felt exactly the same as when I got out of it at Bathurst. It was fantastic,” Perkins told Supercars.com.

“Here I am after 20 years, saying ‘we could change this spring or do that for some more traction’! But I did about 40 laps and had a ball to be honest.

“I was hanging on, but trying to be very mindful that it’s a long time since I’ve driven and not to put it in the fence!

“I’ve always said if I ever did drive again, remember it’s a long time since you’ve driven properly.

“I’ve seen others unfortunately retire 15 times and quite often end up in the ditch. I was mindful of that and knew it was up to me to apply full concentration.

“It wasn’t a frivolous little ‘oh let’s go for some laps’, I paid a lot of attention to what I was doing, considered all my moves properly, how close to the limit I was going to be.

“I wasn’t going to let the car get away from me.”

Having the car perform faultlessly across the weekend was a proud moment for both Larry and Jack.

Now 33, Jack grew up watching his father race and, having since established himself as a Supercars driver in his own right, enjoyed the nostalgia of seeing Larry behind the wheel.

Larry had a brief sample of Jack's Walkinshaw Andretti United Commodore in 2018 for a television piece, but this was an altogether more serious occasion.

Jack gave the Castrol VY a quick shakedown at Sandown in mid-February, before letting Larry do the steering at the Island.

“After so many years of not being at race tracks, not putting race suits on and all that, it was really cool to see him back doing what he enjoys doing; driving race cars,” Jack said.

“I guess that fire in the belly never disappears. He was starting to complain about the set-up of the car to try and go faster, so that competitive spirit is still there! 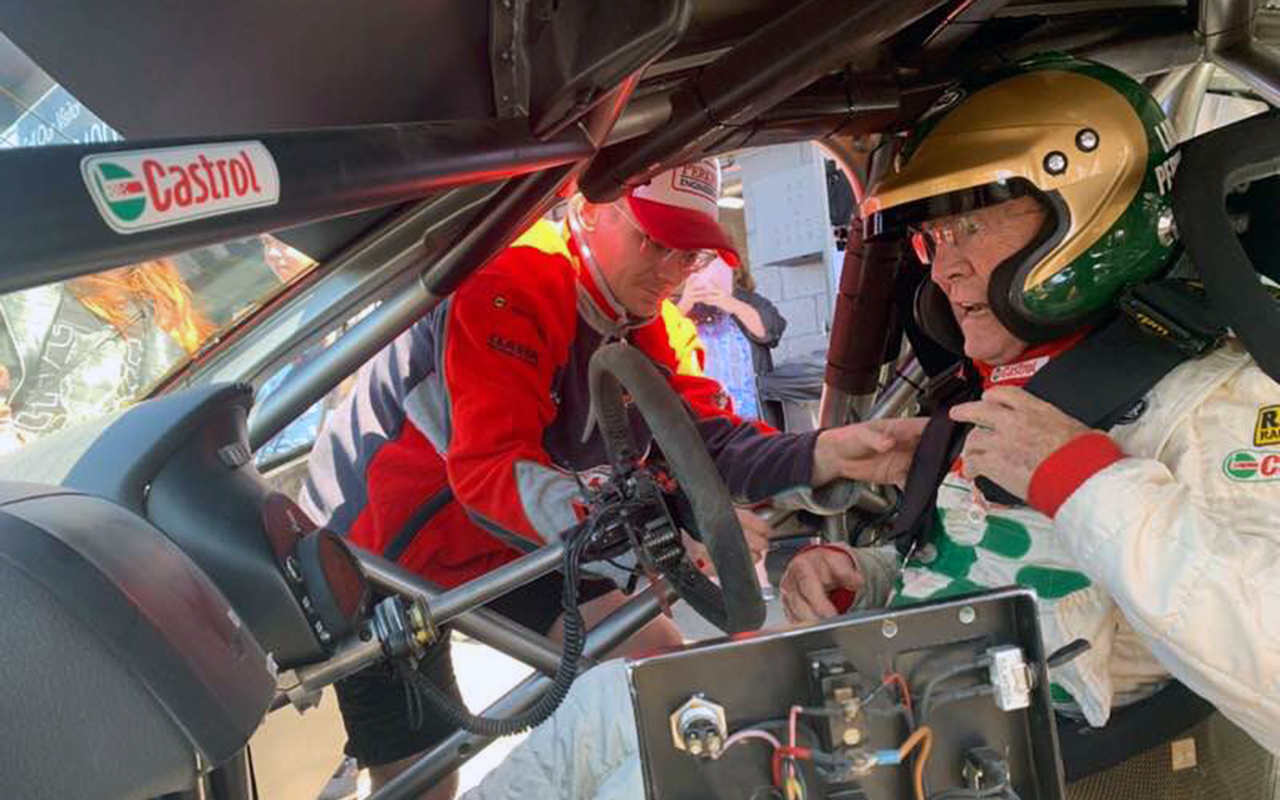 “I remember when I was a little kid I used to love helping Dad get in the car and doing his seat belts up. Doing that again on the weekend reminded me of why I enjoy it.

“My background as a kid was watching Dad race, it was nice memories and nice to have my own family there as well.”

The weekend marked the first race meeting for Jack and partner Tara’s daughter Emmie, who was born in January. 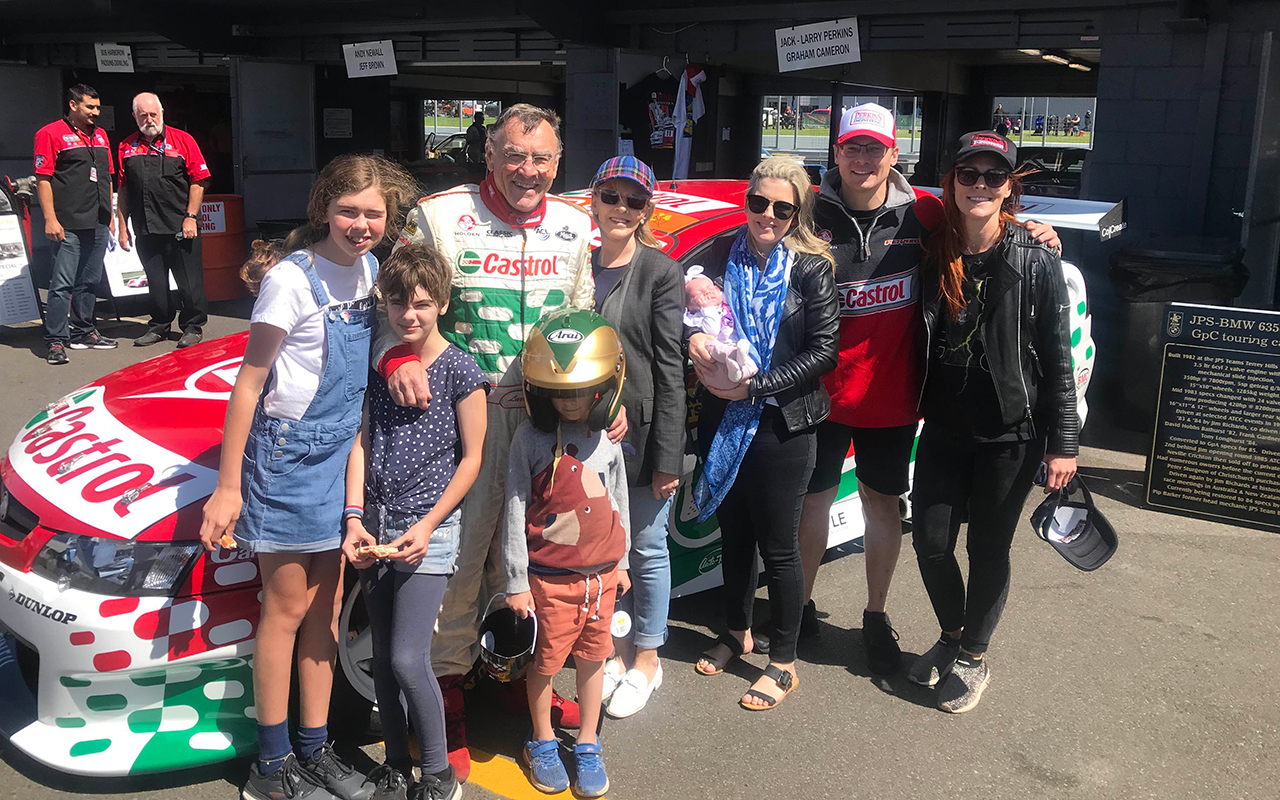 The Perkins clan at Phillip Island

A work of art

Perkins Engineering built 49 race cars and 198 engines between 1986 and the sale of the team to the Kelly family at the end of 2008.

PE 041 was the only chassis retained by Perkins after the sale and has duel significance, given it was Larry’s last Bathurst car in 2003 and Jack’s first three years later.

Jack spearheaded its restoration with a meticulous attention to detail as a labour of love around other Perkins Engineering projects and his own racing and media commitments.

“It’s entirely Jack, I’ve had no part in anything to do with it, other than hold a spanner for him every now and then!” laughs Larry.

“It’s not something I’ve pushed in any way shape or form, he’s wanted to do it and has great enthusiasm.

“The many, many customers who have bought our cars off us, he deals with them a lot and knows the product backwards. It’s tremendous to see.”

Jack explains that restoring a race car to an exact specification takes much more work than building it in the first place, especially one that underwent big changes during its racing life. 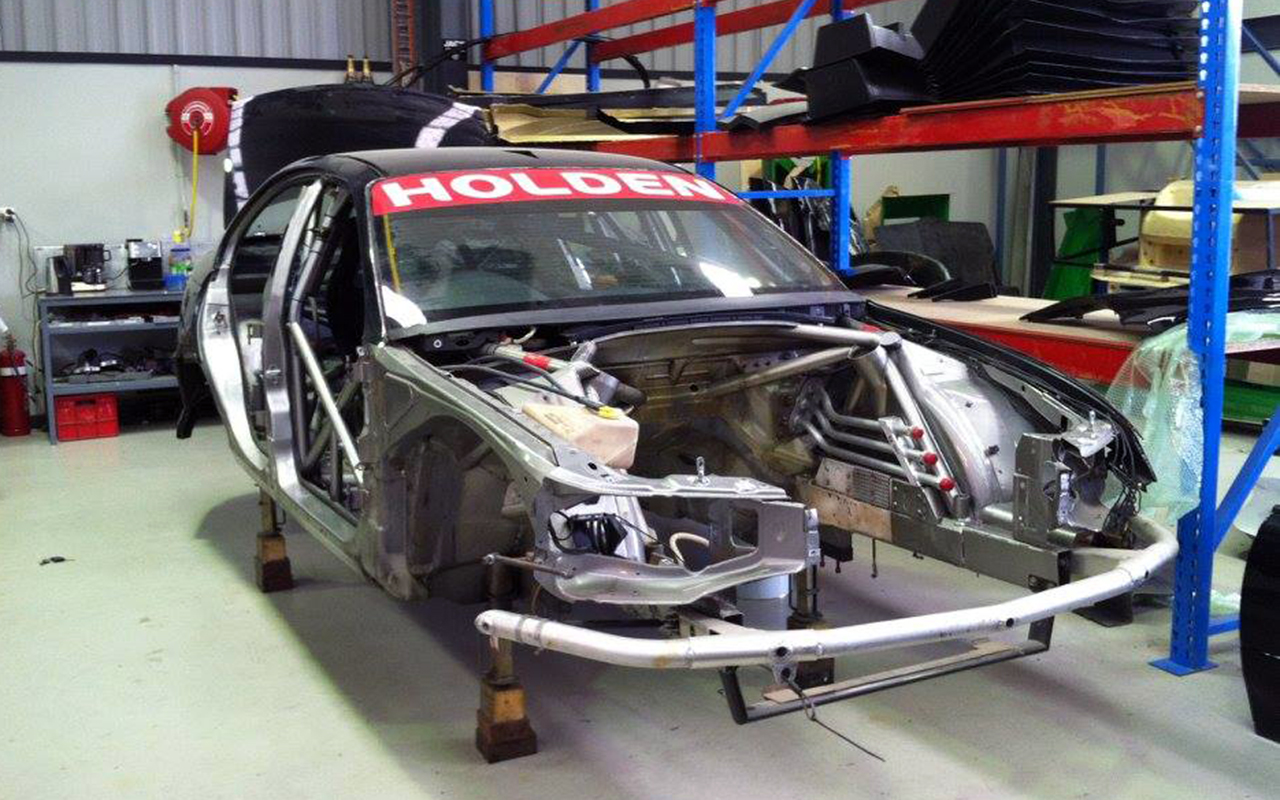 The car at the start of the project

“You’ve got to realise V8 Supercars went through a massive period of evolution in that decade of 2000 to 2010,” he said.

“That was our first double-wishbone [front suspension] car and from when we built it to when we were finished with it in 2006, it went through a lot of evolution.

“The rollcage design got heavily modified, the engine airbox evolved, the rear-end and diff housing went through its own evolution.

“Putting the car back was 10 times a bigger job as building it.

"It was built in three months, but when you’re trying to replicate something it’s a hell of a lot different to making something from scratch.

“I was just proud we were able to maintain the attention to detail that I set out to do from the outset."

There are countless details on the car that Perkins admits only those who know it intimately would recognise, including its ‘X exhaust’. 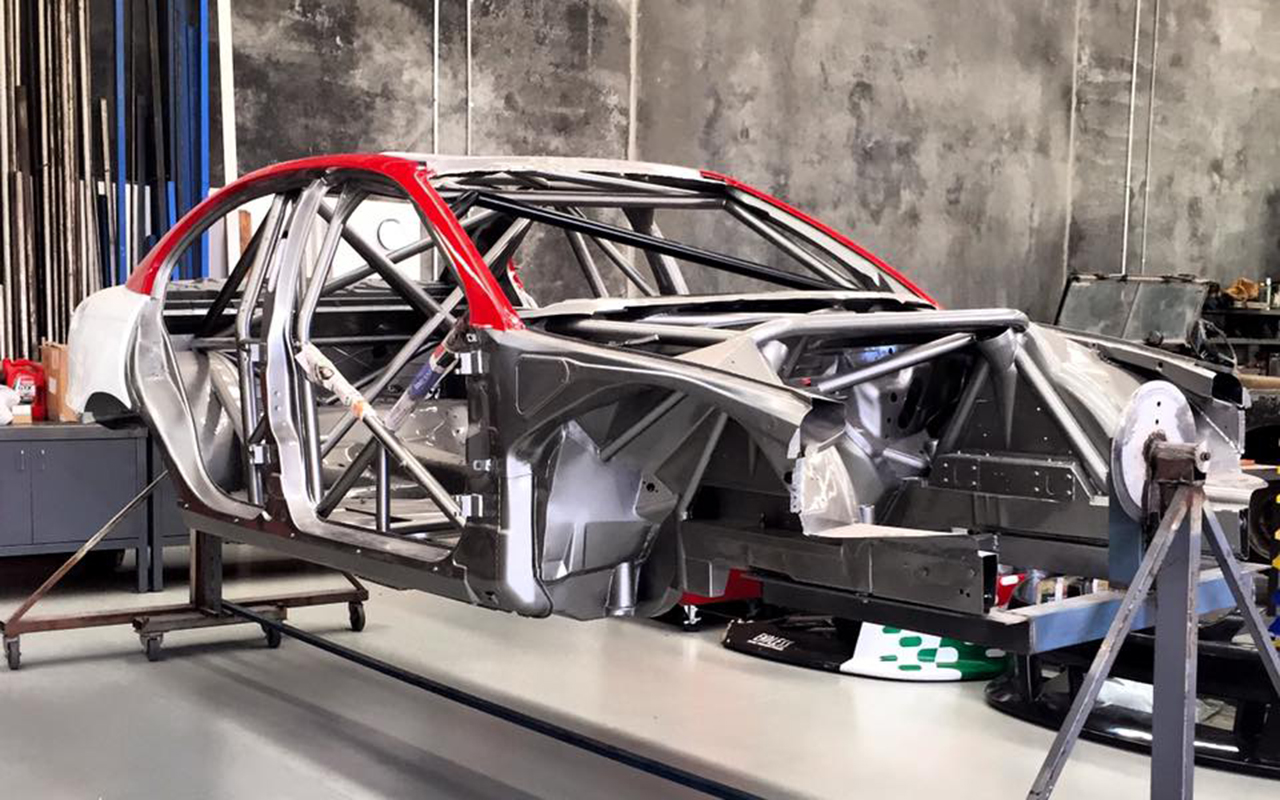 Partway through the restoration

“The car was originally designed to have tailpipes coming out both sides, but when Alex Davison was driving it in Autobarn colours, the exhaust section was cut out so the seat would go lower,” he said.

“That was an easy job to leave, but I know that in 2003 the seat wasn’t in that position, so I had to put the exhaust box back in the car, so it can run an exhaust pipe out both sides.

“Another one is that the transmission tunnel on the drivers’ side still has a crease through it from Dad’s crash at Bathurst in 2003.

“It was important to leave that damage there because the car has been restored to how it was Sunday morning before the race.

“Equally it’s the car I crashed into Mark Skaife in 2006. That caused a lot of inner guard damage that we’d left there, so that was cut out and replaced because it wasn’t there in ‘03.

“There’s lots of little stories that I might be the only one that knows, but it’s kind of a work of art. I’m really proud of how it’s come up.” 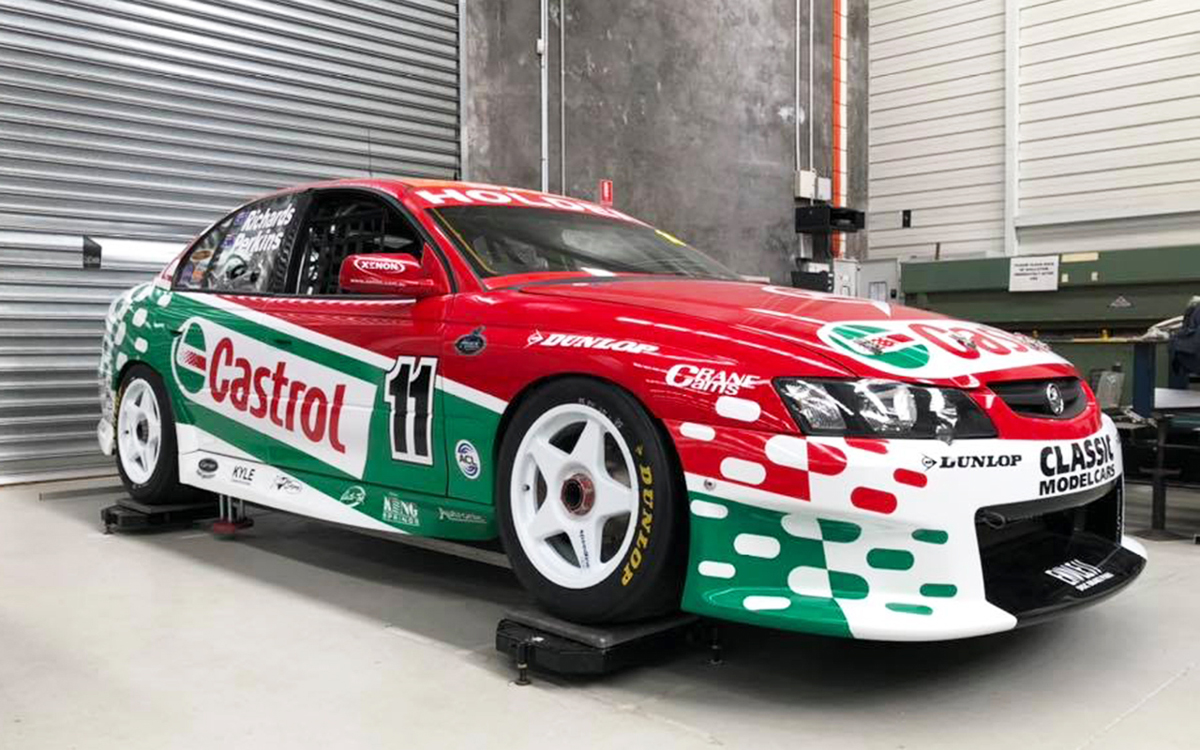 After a big effort to finish the car in time for Phillip Island, there’s already talk of a return next year, possibly with a second car in tow.

In 2016, Perkins bought back his 1993 Bathurst-winning VP Commodore; the restoration of which Jack says is an even bigger project than the VY.

While there are no guarantees it’ll be finished in time for the annual March event, Larry says: “It is a good target date to see if we can get it done.

“We’ve got all the bits, the bodyshell is finished and just waiting for the components to go in it.”

Jack has no shortage of ideas for both the VP and the VY, but notes there’s no rush to finish the next project. 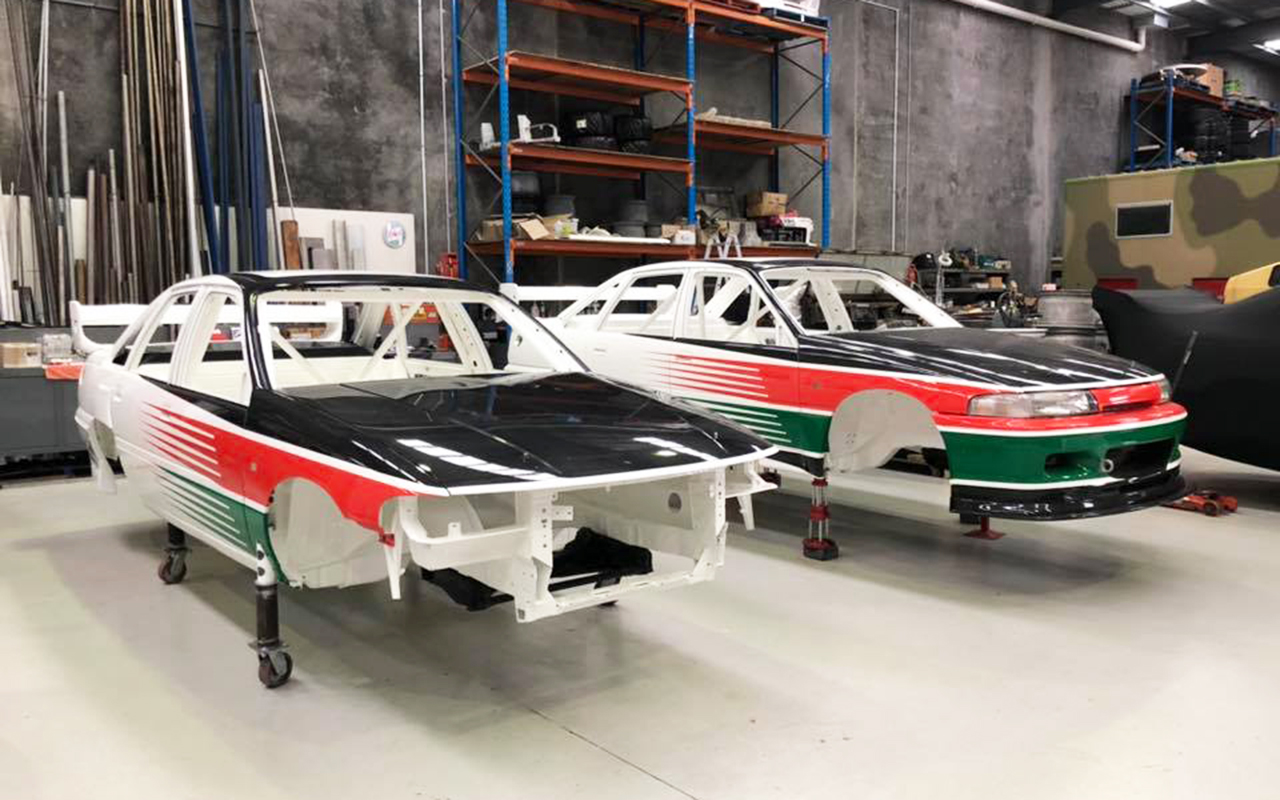 “I’d dearly love to have both of them at Phillip Island together. Goodwood in the UK would be a cool thing to do too, and so would having them back at Bathurst at some stage,” he said.

“We’re certainly not doing these jobs to flog the cars. We’re going to hang onto them.

“Now that there’s plenty of grandkids around, it’s something the whole family can experience.”

Jack is restoring the 1993 car alongside the ’94 Bathurst VP that is owned by a customer and could also be ready for Phillip Island next year.

The Supercars field will race for the Larry Perkins Trophy at this weekend’s Beaurepaires Melbourne 400, with Larry set to hand over the award on the podium on Sunday.