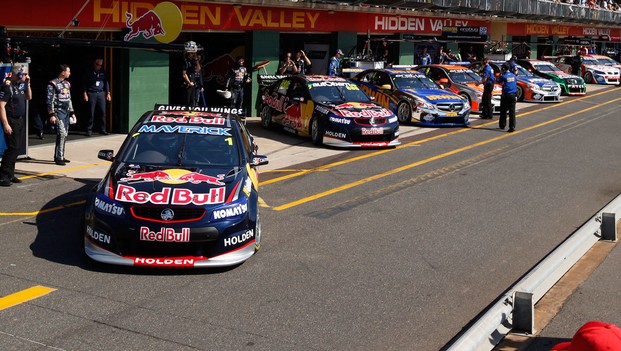 Two 15-minute qualifying sessions will determine the grid for today's two 100km races at the SKYCITY Triple Crown. Can David Reynolds score pole again, will Red Bull Racing Australia score it's first ever ARMOR ALL Pole Position at Hidden Valley Raceway – or will it be a new face on the front row for the weekend?

Four minutes in to Qualifying 18 and Jonathon Webb records the first 1min09 lap. McLaughlin in sceond, with a 1min11.22.

Slade into second with a 1min10.3704. He was happy with his result yesterday – what can he get out of his Erebus Motorsport V8 today?

Teammate Holdsworth follows in third, with Fiore and McLaughlin in the top five, with seven minutes to go.

Whincup in sixth, Will Davison in 10th after a shocker yesterday. Race 17 pole sitter Reynolds in 14.

McLaughlin on a fast lap with four and a half minutes to go. One of only three cars on track at the moment.

Fujitsu GRM Commodores of McLaughlin and Premat in one and two with just over two mins to go. McLaughlin recorded a 1min08.9555, the only driver in the 08s.

Chaz Mostert into second, Lowndes on a flyer, and Tander on a personal best.

Whincup and Lowndes now one and two.

Courtney to the top with five seconds to go.

And with the chequered flag out, it's Courtney, Winterbottom, Will Davison, Coulthard, Whincup, Slade, Webb, Reynolds, van Gisbergen, Lowndes.

Engines started – session about to commence.

Will Davison leading on soft tyres with 10 minutes left in the session. Fiore, Pye and Reynolds follow.

Under eight minutes to go and the top three remain, though Whincup is now fourth, Reynolds fifth, Wall, Winterbottom, Engel and Ingall.

Less than six minutes to go and McLaughlin is on a strong lap. And he jumps ahead of Davison – a 1min08.4204.

Four minutes to go and cars are filing out of pit lane.

Lowndes top briefly, and Reynolds bounces back. Courtney into third – back to back poles here?

Three seconds to go and Lowndes can't beat Reynolds for the top spot.

For the second race of the day, it will be Reynolds, Lowndes, Courtney, McLaughlin, Winterbottom, Coulthard, Will Davison, Bright, Whincup and Slade.

15/06/2013
Related Content
2013 SKYCITY Triple Crown  ›
Stay In The Know
Sign up to the Virgin Australia Supercars Championship Newsletter
We use cookies to ensure that we give you the best experience on our website. If you continue to use this site we will assume that you are happy with it.Ok