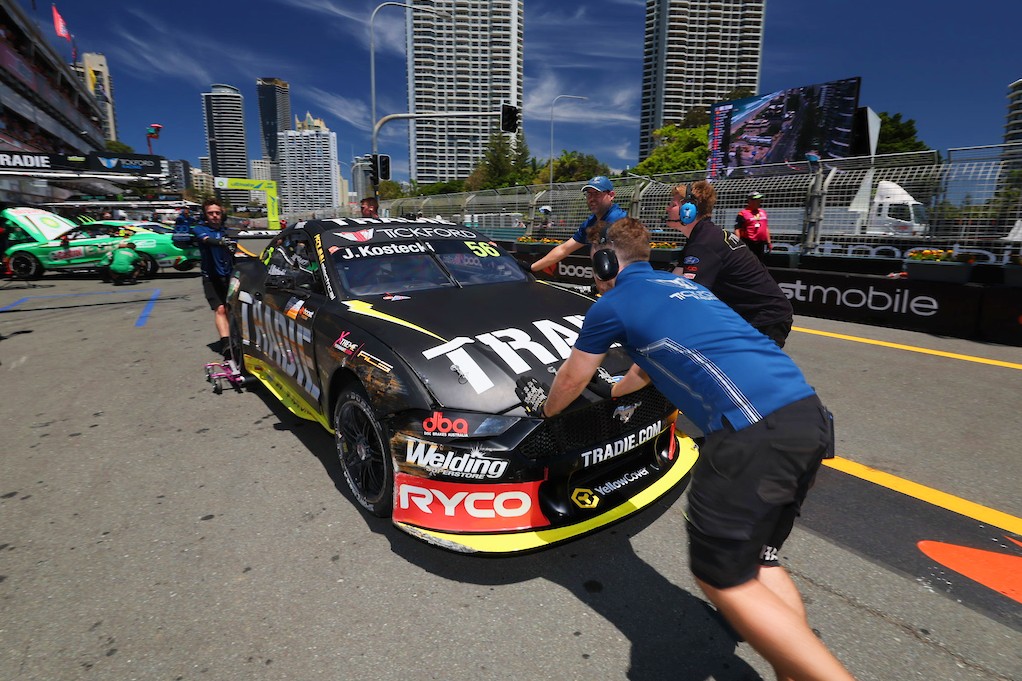 Kostecki was the first casualty of the Boost Mobile Gold Coast 500 weekend on Saturday morning.

The Tickford Racing driver hit the wall at Turn 12 before pinballing into the Turn 13 barrier.

The crash occurred in front of Chaz Mostert, who went on to qualify second.

The damaged TRADIE Mustang was returned to the lane, where Tickford mechanics set about repairing the car.

Hazelwood and Kostecki will start 24th and 25th respectively for Saturday afternoon’s Race 31.

“I’m pretty disappointed with that one,” Kostecki said.

“We struggled a bit yesterday, we’re getting used to the track.

“We made some good gains overnight with myself and the car as well.

“I felt quite strong before I went off; just locked a brake late.

“There’s nothing you can do after that.

“Just a little mishap which ended our session, which sucks."

However, he was embroiled in a discussion with Nick Percat following the session in the Erebus garage.

The #99 Commodore driver was later placed under investigation for impeding.

Percat was shown on the broadcast following Kostecki, and missed out on a Shootout berth.

Kostecki was later cleared, per the stewards' report: "Following receipt of a Request for Investigation from WAU Racing alleging that Car 2 was impeded by Car 99 in the Session, the DRD reviewed the available broadcast footage of the Incident/s and determined the Incident did not warrant referral to the Stewards as no breach of the rules could be established. No Penalties were imposed."

“I’ve been upset about aero understeer at 90km/h around the last corner with a five car-length gap,” Kostecki said.

“I’m trying to get back to the line so start my last lap just to make sure I don't get knocked out.

“He was having a bit of a whinge, but there’s not much I can do, I’m trying to put a lap down too.”

Percat played the incident down, but said he expected Kostecki to move aside.

Kostecki had already secured passage into the Shootout at the time of the incident.

“It wasn’t even silly… I just caught him and he was on a warm-up lap,” Percat said.

“It cost me a tenth-and-a-half in the last sector. Then I had to do my second flyer starting under his rear bar.

“I just asked him if he could’ve went behind me because there was no one there.

“We talk about following cars and stuff, I just wanted one corner to get free.

“Obviously he was fast. It wasn’t about him blocking, he could’ve popped in behind me and used all the clear track was there.

“It’s so tight, two tenths puts you third or something… we’ll see how we go in the race."

The ARMOR ALL Top Ten Shootout will commence at 1:05pm local time.

How van Gisbergen can seal title on Gold Coast