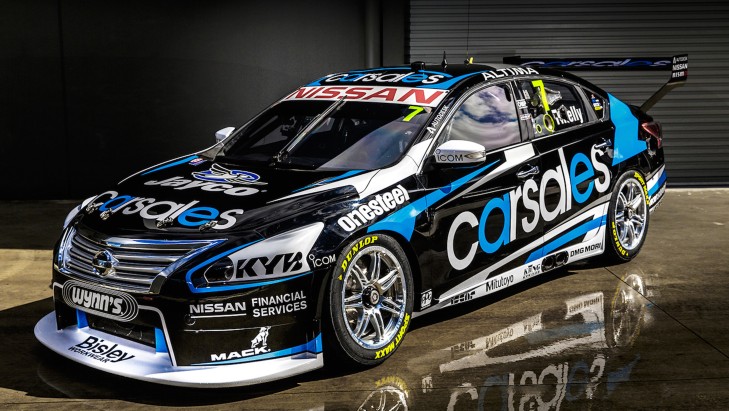 Todd Kelly's carsales Nissan Altima will hit the track for the first time today at Winton Motor Raceway with the team testing ahead of the Pirtek Enduro Cup.

It was announced back in July that carsales was to be the naming rights sponsor of Todd Kelly's #7 Nissan Altima V8 Supercar from the Wilson Security Sandown 500 in a multi-year deal.

"It's really good to see the car and actually hop into the carsales car for the first time," Kelly said.

"It feels a bit strange because we've been dealing with all of the carsales team for some time now. We've built up a great relationship right through their business and it feels as though they have been on board for months.

"It's good to finally get their name on the doors and start getting a little bit of recognition at the circuit of the carsales brand with Nissan Motorsport."

"Sandown is a massive event for the team, and it's great to have Nissan Global driver Alex Buncombe back to drive with me," Kelly said.

"It's such a heritage event for the series and it's a perfect place to launch the partnership.

"It's great that it's a local event. It's just up the road from the race team, Nissan Australia's head office and also carsales.com.au HQ so we're expecting it to be a big weekend."

Buncombe has been looking forward to reacquainting himself with the Nissan after a positive performance throughout last year's enduros.

"I'm really looking forward to returning to the V8 Supercars and joining the Kelly boys in the Nissan Altima," Buncombe told v8supercars.com.au.

"Obviously last year there was lots to learn in a short space of time - the car, the team, the circuits and the way to approach the racing in this series.It was a different challenge than that in Europe but I hugely enjoyed it.

"I've kept a close eye on the season so far in front of my TV back in Europe and as always the racing looks super close and exciting."