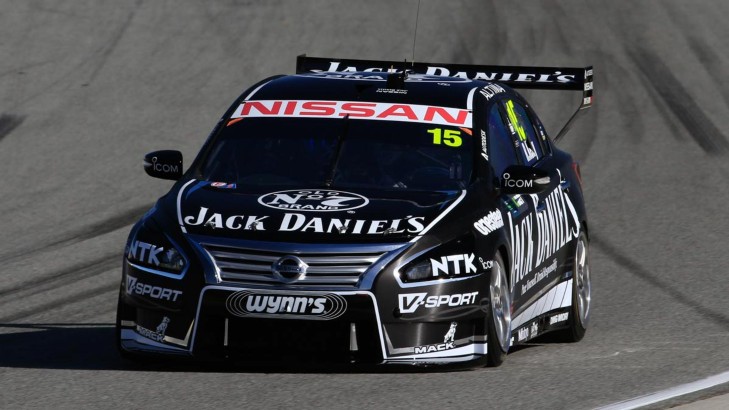 Rick Kelly has declared Nissan Motorsport "is ready", with the right personnel in place behind the scenes and progress with the Altimas after the off-season aero re-homologation.

Kelly believes his Jack Daniel's Racing team saw a podium result go begging after a pit stop drama affected him during Sunday's 200km race in Perth - and while he was disappointed to miss out on a top finish, he said last night on Inside Supercars he is excited about the team's potential for 2015.

"I think the team and the personnel we've got is the best we've ever had," Kelly - who is both driver and team owner at Nissan Motorsport - said.

"Don't forget, when we started [the team] in 2009 we had to get 45 people together in one go and it's taken a long time to instil that Championship winning teamwork.

"[Team manager] Scott Sinclair has come on and done a fantastic job of that - so in my opinion, I think we're now ready."

The Jack Daniel's racer is the highest placed of the four Nissans in the Championship, 10th after three points-paying events. While on for a good result in Sunday's race in Perth, the team lost time in the pits with a wheel nut issue, which caused Kelly to drop down a lap and out of contention during that final stop.

"Unfortunately the timing of the safety car burnt us, and we had a mistake on the pit stop, which probably cost us a shot of a possible podium," he said.

"We'll keep our chins up, our pace was a positive, but we were definitely chasing a top five result there."

Both Kelly's results on Saturday were in the top 10, when racing on the Dunlop hard tyre - and with the car "fantastic" on the soft compound, used only in the 200km race, he was hoping to improve in the big points paying outing.

"We had a fantastic car on the soft tyres, and we made a pretty steady start," he said of Sunday's race, which he qualified 12th for.

"We charged through the cars that were leading pretty quickly, even though we were a lap down, and we were in a good position to watch the battle at the end between [Craig] Lowndes and [Will] Davison.

"Not the result we were wanting considering the improved qualifying results we've had, and the fantastic car speed we had on the soft tyres, I think we were on for a good result."

After the off-season aero testing, Kelly believes the closeness of the field is tighter than ever - which is why it is so important to have the right people behind the scenes, to try and find an advantage over the competitors.

"There's only a few differences now up and down pit lane ... the setup, the race weekend and how well you run that, and a little bit of horsepower," Kelly noted on the Inside Supercars panel.

"One thing that's not mentioned anymore is anything about aero, from any manufacturer. I think the sport has now done a great job of refining that."

The V8 Supercars next head to Winton Motor Raceway in Victoria - the site of Nissan's first win since returning to V8 Supercars, with James Moffat behind the wheel in 2013.

05/05/2015
Related Content
15' Nissan Motorsport ›
15' Jack Daniel's Racing ›
Stay In The Know
Sign up to the Virgin Australia Supercars Championship Newsletter
We use cookies to ensure that we give you the best experience on our website. If you continue to use this site we will assume that you are happy with it.Ok