Rick Kelly admits the second-lap incident that ended Tim Slade's Saturday race at Hidden Valley was 'basically a complete misjudgement on my part'.

It fired Slade into the outside wall, ending the Brad Jones Racing driver's race.

"Basically a complete misjudgment on that corner on my part," Kelly said.

"He is one of them good blokes in pitlane, you don't want to take him out.

"We were having a big battle, he got into me at [Turn] 1 and doored me out of the way and I was behind him having a tussle and I was trying to get underneath him into the hairpin and give him one back.

"Unfortunately I misjudged the poor run he had.

"You could see him out on the kerb on the left and I had a good run underneath him, and as he was coming back to the right to take the braking line, I misjudged him and tagged him into the fence."

Kelly was given a drive-through penalty by stewards for the contact and finished a lap down in 21st place.

"It's a shit day for us, but you don't want to take someone else out," he added.

"I got a drive-through penalty for it, but he is worse off, he's in the fence, his whole team have to fix that car now, so apologies to those guys.

"We want to have a good hard battle like that, but you don't want to turn someone into the fence, so tomorrow we won't be doing that."

He was one spot behind Slade's team-mate Nick Percat in what has been a quiet weekend for BJR. 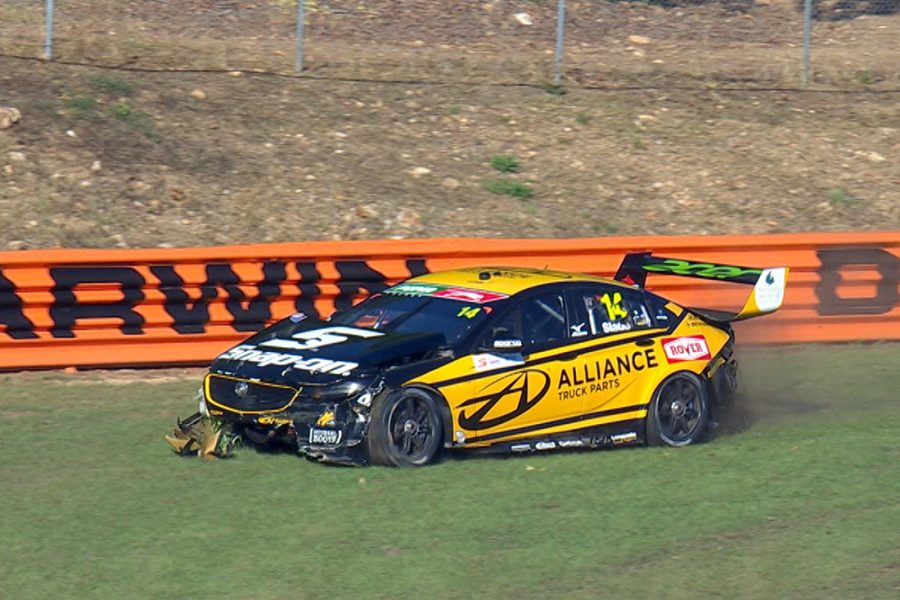 "I just caught the replay as I jumped in the medical car. I actually had no idea [what had happened]," Slade said of the incident after returning to pitlane.

"I got Rick at Turn 1 that lap, then looked in the rearview mirror and saw him on the outside to the right, then next thing I was in the fence. It was a bit of a surprise.

"I’m not sure if he was moving over to cover Todd [Hazelwood] or have another dive down the inside of me, but he collected me and sent me into the fence.

"It’s obviously unfortunate to end that way, but also for the guys to fix tonight is not ideal, but we’ll fix it up and go again."