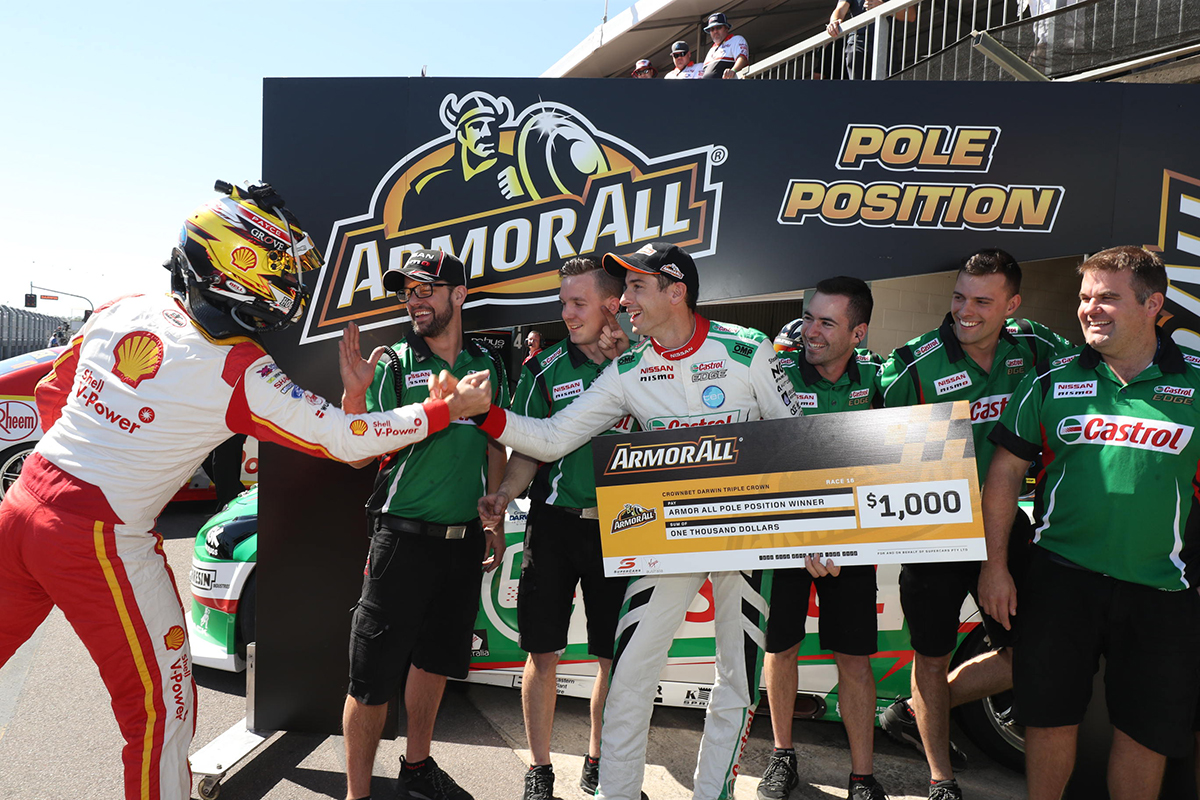 Nissan Motorsport’s Rick Kelly has claimed his first ARMOR ALL Pole Position in 12 months, for Sunday’s leg of the Darwin CrownBet Triple Crown.

Kelly’s last two Supercars poles have come at Hidden Valley, in 2015 and ’17, and he could again not be beaten over a single lap.

Having been sixth-fastest in the regular qualifying session, the Castrol Altima was one of the big movers in the ARMOR ALL Top 10 Shootout.

First to take to the track, David Reynolds turned a 1:06.0310s in his Penrite Commodore on roaded tyres.

That remained the benchmark until Jamie Whincup and Kelly went into the 1:05s on fresh rubber, the fourth and fifth drivers out.

Four drivers were unable to beat Kelly, though, with McLaughlin the last driver on the road capable of denying him pole.

McLaughlin lost tiny margins to Kelly through the first two sectors and despite setting the best time of all in the final could not take top spot.

He slotted into second, with Kelly’s margin 0.0547 seconds.

“This one is completely unexpected,” said Kelly of the 10th pole of his career.

“I thought if we did a clean lap we might be in the top four, but this is massive.

“It was all in Turn 1 for us. Scotty McLaughlin had us nailed there all weekend and he just went a little bit deep and cost himself a 10th.

“Massive thanks to the crew, it’s so great for us, we’ve got to make the most of it now in the race.”

Saturday victor McLaughlin’s grid spot ensures the Triple Crown – of both race wins and top spot in the Shootout – goes unclaimed for another year in Darwin.

“Congrats to Rick, he did a great job there and we just missed out by a little bit,” the championship leader said.

“The temperature as well on this track changes so much, it could be within half-an-hour it goes up a huge amount, which completely changes the way you set the car up and how I approach the lap.

“You’ve got to try and figure all that out in the warm-up lap and I probably didn’t get it [figured out] enough for Turn 1.”

Whincup and Reynolds will share the second row of the grid in their Commodores, improving from seventh and 10th in the pre-Shootout order.

“I just went a little bit deep into Turn 1, pinched a front, ran a little bit wide and lost pretty much all of the time there,” De Pasquale said.

“It’s alright. It was my first go at it, the car is still quick and we’ll push on in the race.”

Among those to have missed the top 10, Shane van Gisbergen will line up 11th and Chaz Mostert and Craig Lowndes 13th and 14th.