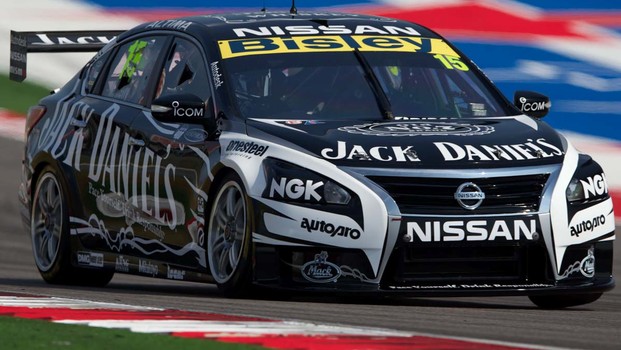 His consistent top 10 pacein Austin belied it, but factory Nissan Motorsport driver Rick Kelly has revealedhe struggled to overcome his disappointment when he realised the team’s newAltima V8 Supercar was not a race winner.

“It took a little while toaccept that and get my A-game back on,” Kelly admitted to V8Supercars.com.au.

Buoyed by competitive paceat the pre-season test in his Jack Daniel’s Nissan Altima, the 2006 V8 SupercarsChampion had a rude comedown at the Clipsal 500 where the lack of competitivehorsepower became apparent.

“I built myself up mentallyto go out and have a shot at being at the front and so when Clipsal hit and thereality hit that we were a little bit behind in a couple of areas and we neededto develop the engine, it hit hard at me personally,” Kelly said.

“It really hit hard to knowthat I could only turn up at the events and sneak into the top 10 only if I didfantastic job. That knocked me down for about six weeks, just hurting, becauseyou want to go out there and win… It’s a great sport when you have a winningopportunity, but when you don’t and you really truly give a shit about it, itdefinitely hurts.”

Kelly’s frustration was evenmore pronounced because he had endured a poor final year in Holden Commodoresin 2012 as the team he owns with brother Todd focussed on developing the Car ofthe Future Altima for 2013. His last good season was in 2011, when he finishedsixth in the Championship and scored three race wins.

Kelly, 30, said he containedhis frustration better than he did when he was younger, angrier and more vocal.

“I learned that can bedamaging and turned that around, but I literally prepared myself to go outthere and win and challenge up the front and like any driver when therealisation comes that is not going to be possible then that hurts. I am notcapable of just going ‘oh well’.

“I have taken that onboardnow I guess and we have been moving forward. I am ready to go again, ready toturn up and get 10th if that’s the best I can do, get eighth ifthat’s the best I can do and just try and gather as many points as we can forwhen we do have a bit more straight-line speed so we are in a good place tomove forward.”

Kelly’s speed at the Circuitof the Americas – where he used the Altima’s good handling to its best on thetwisty course – saw him qualify fifth twice, sixth and ninth. He finishedsixth, eighth twice and ninth in the 100km sprints. He now lies 12th in championship points.

One factor that has revivedKelly’s spirits has been the challenge provided by new teammates James Moffatand Michael Caruso in their Norton Altimas.

“Moff is capable of doinggreat things – as is Michael who has had some dramas that have taken him out ofcontention in a few races – and ever since he drove the car at the first testday Moff has been a real stand out. Really impressive.

“It reminds me of the dayswhen Garth Tander was my teammate. We had a great relationship, but if youwere faster than him at the end of the day then you had to be careful becauseyou knew he would come at you... He would see what you were doing and work outa way of doing it better than you.

“Those are the ingredientsthat are going to takes us a lot further up the front when we do have the productunder us to get there.”

Rick Kelly  ›
15' Jack Daniel's Racing ›
Stay In The Know
Sign up to the Virgin Australia Supercars Championship Newsletter
We use cookies to ensure that we give you the best experience on our website. If you continue to use this site we will assume that you are happy with it.Ok