Brad Jones says he 'can't compliment my guys enough' after repairing the Commodores of Nick Percat and Macauley Jones in time to race at Hidden Valley on Sunday.

Both Holdens crashed at Turn 11 during ARMOR ALL Qualifying, Percat initially going in nose first and Jones then losing the rear.

Percat expressed initial doubt that his Dunlop-backed entry could be repaired for the race, which started less than four hours later.

However the crew from all four Brad Jones Racing entries, including wildcard Jack Smith, chipped in to get the job done.

It came after repairs on Tim Slade's Commodore ran to midnight on Saturday, having been fired into the wall early in the race.

"It was touch and go there for a little bit, especially Nick’s car was very badly damaged," Jones told Supercars.com.

"After the weekend we’ve had, we’d already done a lot of work. 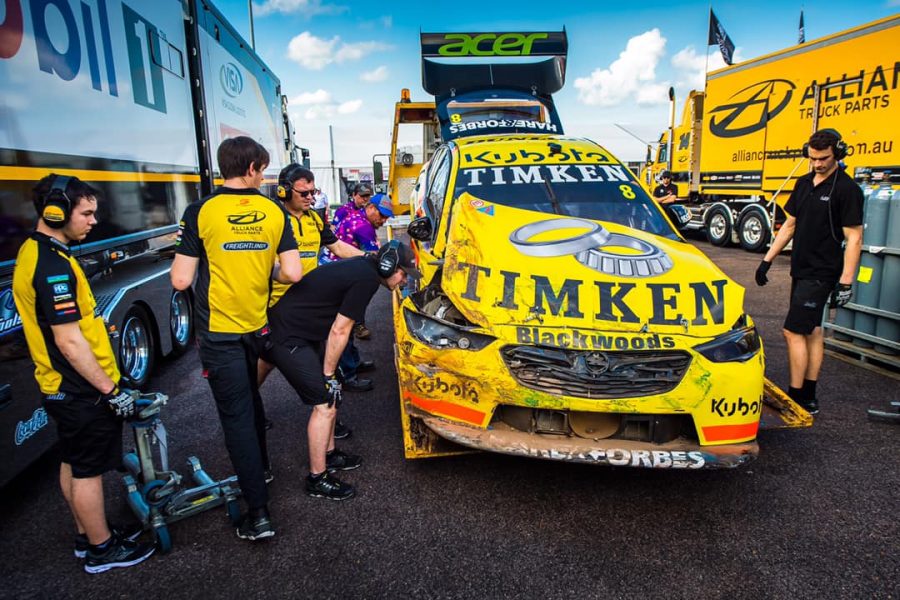 "We had all the guys down there working on the two cars at one stage, trying to get Nick’s car ready.

"Even the guys from the wildcard came down to try and give us a hand while their car was in parc ferme.

"It shows what a great group of people we have at BJR where, it doesn’t matter what’s going on, everyone chips in to help everyone else."

From the rear of the grid, Percat and Jones finished 15th and 22nd, the weekend's results ending a run of 10-straight top-10 finishes for Percat.

It moves Percat from seventh to eighth in the championship, while a DNF and down-on-power 18th drop Slade from 10th to 11th.

"I thought Nick really, when you consider what that car had been through, for him to start where he did and end up in the middle of the field I thought was an excellent result really," Jones added.

Jones noted "we’ve got to have a look at what’s exactly wrong" with both chassis when BJR returns to its Albury base.

That includes assessing whether either chassis would need to be parked for further repairs.

"Macca’s car may need to go on the jig, which is a bit disappointing, it’s a bit bent, and Nick’s car’s got a few bruises underneath it.

"It wasn’t perfect, we didn’t have the front bar on it quite right, there were a few things we would have done differently.

"But we got it out with, I think there was three minutes until pitlane shut and we did more work on it on the grid until the race started.

"It really comes down to the group of people that we have.

"I think over the years, my team is one of the ones where, when push comes to shove, they’ve been able to raise the bar and get the cars fixed, be it overnight or between sessions.

"Whatever it is, they’ve really done an amazing job and [Sunday] is just another example of that."