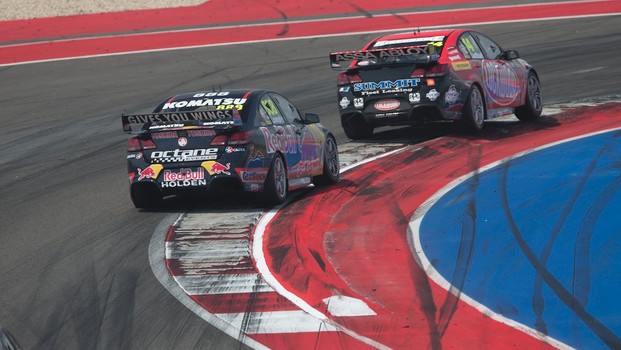 BJR team owner Brad Jones said it wasexciting to be in second place in the Team's Championship heading into thisweekend’s SKYCITY Triple Crown in Darwin. And while the leading team hasclearly found a gain since Perth, Jones suggested Red Bull Racing Australiacould be caught.

“I don’t think there’s much differencebetween Triple Eight’s performance and our performance,” he said yesterday.

“We’re doing our very best. The targetfor us has always been FPR and Triple Eight – last year they were the pacesetters – we’re just doing as much as we can and trying to win as many races aswe can.”

By comparison BJR is a smaller team, andJones said it was about maximising ‘bang for their buck’ and not worrying aboutwhat others were doing, but focusing on doing the best job they could.

Despite the points tally, Jones said it wastoo early in the season to identify which drivers they were racing.

The Team’s Championship is very importantto Jones, as it is representative of the crew's hard work.

“It’s a reflection of where we are withinthe group and the Championship,” he said. “It’s very exciting for us to comepast FPR and take second place.

“It’s very early, but for me and the teamit’s exciting to move into that position… We’ve worked hard as a group toget to where we are now – and we’re not in a rush to slide back down thatslippery pole.

“It’s about attention to detail and greatpeople.”

Compared to what we’ve seen since BJR’sdominant sweep at the second event in Tasmania, last event the Austin 400 was amixed bag with Jason Bright’s car suffering issues and a post-race penaltysouring Fabian Coulthard’s win. Though Jones believes the weekend was far fromterrible.

“We ended up on the podium three of fourtimes, so it wasn’t too bad a weekend – it wasn’t that long ago we weren’t onthe podium at all.

“Sometimes it’s a bad weekend and sometimesit’s great – it’s about working hard to make sure there are more great than badones.”

Jones felt there wasn’t a particular itemon the car to put the team’s strong performance down to, but suggested it wasthe balance that allowed the driver’s to maximise the potential of the cars.

“We still get in wrong sometimes – westruggled a bit with Jason at Texas and went the wrong way.

“I don’t know if there’s a particular itemon the car that’s absolutely right, but it’s a good set up and the combinationwe have with engineers, drivers, mechanics, the whole team is first class.”

Fabian Coulthard  ›
15' Team BOC and Freightliner Racing ›
2013 SKYCITY Triple Crown  ›
Stay In The Know
Sign up to the Virgin Australia Supercars Championship Newsletter
We use cookies to ensure that we give you the best experience on our website. If you continue to use this site we will assume that you are happy with it.Ok