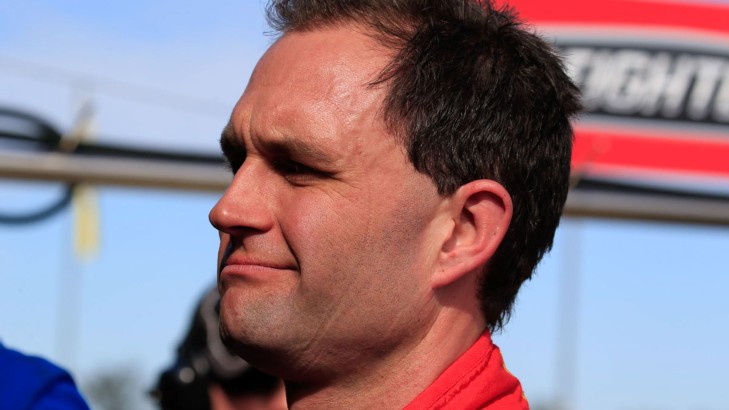 Andrew Jones is keen to resume his V8 Supercar Dunlop Series campaign this weekend at the Coates Hire Ipswich SuperSprint after a medical issue forced him out of the previous round in Townsville.

The 35-year-old withdrew from Townsville after he was diagnosed at the start of the weekend with pericarditis - a viral infection of the heart causing Jones to suffer severe chest pain.

He enters the fifth round of the series with a clear bill of health and is eager to recover the points he lost in Townsville after his absence dragged the former champion back five places in the series standings to 10th.

"Particularly after a bad run at Perth - and then we clawed back at Winton and managed to get into the top five in the points, so we just needed to get that momentum going in Townsville and to keep it going.

"But more than anything, there was a lot of personal disappointment [in missing Townsville] because I love going racing, I love getting through a race weekend and going through all those emotions and trying to do the best you can."

Jones retook the wheel of his Holden yesterdayfor the first time since Friday practice in Townsville, recording the 10th quickest times across the day's two practice sessions.

He heads Brad Jones Racing's Dunlop Series program, which also fields Josh Kean - who recorded a best result of 16th yesterday - and cousin Macauley Jones, who was seventh fastest in practice one.

The team have enjoyed a series of strong results during their 2015 Dunlop Series campaign, with Jones finishing the weekend on the podium in Winton, so the squad's speed yesterday wasn't overly impressive to the veteran racer.

"All cars have started off okay," Jones said of the squad's speed during practice on Friday.

"Obviously we want more outright pace straight out the gate, so it's probably disappointing to be honest when you see one car seventh and one tenth.

"I feel like our cars over the last few rounds have been in the top five, if not the top three, in terms of pace, and at Winton we rolled out of the truck really really fast.

"But we've done a lot of work to our cars and it's very enjoyable to see Josh and Macauley learning. It really helps their knowledge base at such a young age."

Despite falling back in the points after his absence in Townsville, Jones currently leads his BJR stablemates in the points, with Macauley and Kean 15th and 18th respectively.

McLaughlin uses the low to drive the highs

2015 Coates Hire Ipswich SuperSprint  ›
Stay In The Know
Sign up to the Repco Supercars Championship Newsletter
We use cookies to ensure that we give you the best experience on our website. If you continue to use this site we will assume that you are happy with it.Ok