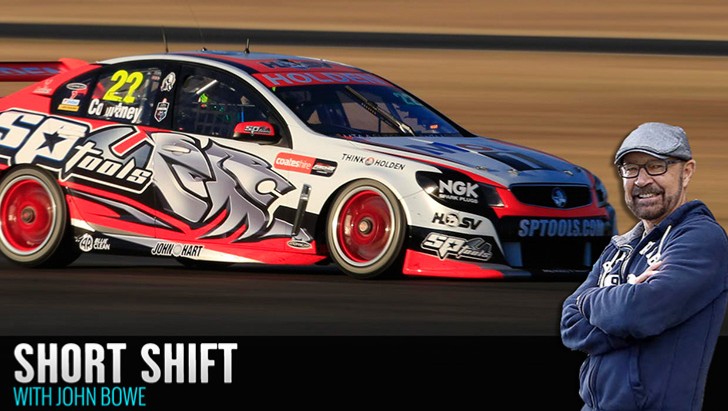 I enjoyed James Courtney's performance on Sunday enormously, the long Sunday races are what really interests me and I suspect the fans feel much the same. I've said to anyone who'll listen I'd love to see the category move to longer race formats on both days!

I spend a significant time at circuits on race weekend and I'd like to think I'm lots of things in V8 Supercar land, I understand what's being built behind the scenes and I believe they are headed in the right direction.

There's plenty of chatter about our sport/business, let me share a couple of things I know. Given, we're in difficult economic times our sport is doing okay - attendance numbers are up slightly and at the weekend at QR there was an increase in crowd numbers by about 2800 people.

Every sport is competing for fan dollars; V8Supercars are constantly working on plans to increase fans access, involvement and content while delivering value and trying to assist teams to control costs.

An area that has significant merit in my view is the running two day V8 Supercars meetings. For example the V8 Supercars will run on Saturday and Sunday at Sydney Motorsport Park but there is still plenty of on-track action and fan engagement on Friday.

A suggestion might well be incorporating test days at meetings like QR, Winton and say Sydney Motorsport Park next year, ensuring three days of V8 Supercars but helping teams control costs by effectively holding these days at events they are already attending.

That would be a win/win for everyone, this would be provide the fans with content and then maybe finish with the day with a practice session. The fans see plenty of on track action and it will help the teams contain costs.

Recent cost containment initiatives by V8 Supercars have been achieved on behalf of teams, including a great deal on fuel with teams supplied United. The cost saving is significant and other expenses are constantly being addressed.

I reckon the biggest subject this year has been the issue of the new TV deal. I'd like to share the matters 'matters of fact'. This is the biggest TV deal ever done for our sport, yes it's a commercial operation and without TV we don't have a category - end of story.

Now, while the pricing for the Fox TV package hasn't been announced (as yet), let's look at some 'matters of fact'. Research showed the large majority of viewers want less ads... sorry folks that's how TV works ... they'll advertise in premium sport/times. You can't get that sort of coverage for our sport without TV selling something to recoup their spend!

The other significant point was, fans wanted High Definition TV, and they'll get that on FOX SPORTS, every single race, every single session, ad-free.

It's my understanding you will also be able to watch EVERY race on free to air TV (Ten and/or ONE HD) over a race weekend. Given some of it may be delayed, most importantly you'll still be able to see the coverage on free to air.

Let me pose a question, do you have a favourite footy (AFL/NRL) team? How many times do you see them live on free to air TV?

If you're a subscriber to FOX SPORTS you could well see all their games live. Are we (motorsport) any different, not at all! In my world the best seat is trackside, while that isn't always possible I think the move to Pay TV had to happen - the future of our sport is certainly in better shape as a result.

I think our fans are different to footy, some support a brand or manufacturer, others support a team and many of you support and follow your driver, I get it. Simply, motorsport consumes money like no other and the TV deal done for next year and beyond is vital for the future of our sport - it's that simple.

It's the single biggest TV deal ever done for motorsport in Australia and will ensure teams receive a much needed dividend from the end of next season. Sadly, some fans will be unhappy, but like I said, you'll see every race over a race weekend on free to air ... it just might be delayed, like your footy.

Looking up the road a bit, about 80% of our future races are secure for the next three years, while some of the signature events are lock for the next 8 to 10 years. Given, some of these are Government supported events and vital to their regions. I think considering the difficult economic times we're currently experiencing, V8 Supercars under James Warburton's leadership have done an outstanding job.

We have the most competitive motorsport category in living memory, in the world for that matter - the racing is awesome. It is a very prestigious battle between Holden, Ford, Nissan, Volvo and the Erebus AMGs we are privileged to watch the Championship of such a standard unfold. I'm hopeful other manufacturers will join in the next few years.

Finally, looking at the format structure, I'd like to see a maximum of twenty Dunlop Soft tyres issued for a round, and dispense with the Dunlop Sport Maxx control tyre. We could have the option of a Dunlop Super Soft on hand to add a little spice.

See you at Sydney Motorsport Park in a few weeks.

James Courtney  ›
2014 Coates Hire Ipswich 400  ›
Stay In The Know
Sign up to the Repco Supercars Championship Newsletter
We use cookies to ensure that we give you the best experience on our website. If you continue to use this site we will assume that you are happy with it.Ok