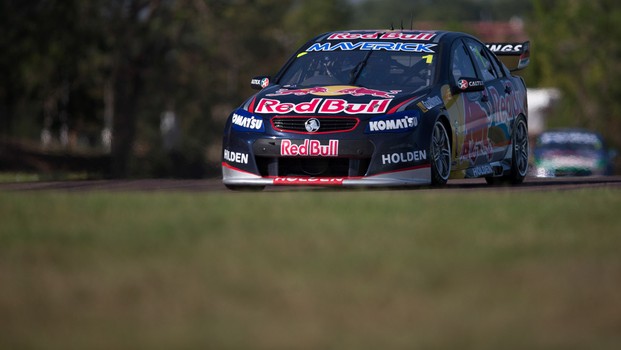 V8 Supercars four-time Champion and currentpoints leader Jamie Whincup will be online for a chat at v8supercars.com.au at 5.30pm AESTtoday.

“We’re halfway through the year and a lothas gone on – including Texas – so I thought people may want a review ofhow I believe things are going,” Whincup said.

The Red Bull Racing Australia driver had anuncharacteristically poor result at the last race in Darwin, his worst of the three at the SKYCITYTriple Crown, but is looking ahead to the Sucrogen Townsville 400.

Amazingly, Whincup has won a race at theevent every year since it’s induction into the Championship in 2009 – sohe’s had five wins of eight races on the street circuit.

“Yes, I’ve generally had a good run atTownsville, but my motto this year is to forget the past and concentrate onwhat’s going on right now,” Whincup told v8supercars.com.au.

“I take confidence from what we’ve donethis year, but forget what’s gone on beforehand.

“Townville is almost like my home round, being inQueensland – it’s just up the road.

“It’s a fantastic track … it was built from a clean sheet of paperyears ago and has great racing corners. I think it’s one of the best.”

Whincup agreed Darwin was a mixed bag forhim, but said he took both positives and negatives away from every raceweekend.

“We had a fantastic Saturday and a realchallenge on Sunday.”

The change to the soft tyre on Sunday was atough one for Whincup as the team had a great setup on the hard tyre, but hehadn’t done much driving on the softs.

“We just missed the eight ball slightly.But ultimately we were looking at a top five result for both races."

Whincup said of his pit lane penalty: “I made a rookie error – we can debatewhether the rules are good or not all day long – but I broke them and Iwas penalised.”

In the car, Whincup has to make decisions“on the hop” which he finds the hardest part of driving. “You don’t have timeto go through and work out a strategy, go through a plan and execute it– you have to call at the time what you see in front of you. Sometimesyou’re right, sometimes you’re wrong, but there’s only a split second.”

Outside of the car Whincup describeshimself as loose and chilled out. “I like to do things properly, so I’ll takemy time, think about things, come up with a decision and then attack thingsproperly.”

With the trip to Texas, the four-timeChampion had the chance to experience some of America afterwards. And while heloved Alcatraz and the Grand Canyon beyond expectation, he was soon ready to comehome and get back to training and eating properly.

Ahead of his live chat, Whincup toldv8supercars.com.au he would be open and honest with fans during his houronline.

So make sure you come back tov8supercars.com.au at 5.30pm and bring the big questions for our Championshipleader.

Jamie Whincup  ›
15' Red Bull Racing Australia ›
2013 SKYCITY Triple Crown  ›
2013 Sucrogen Townsville 400  ›
Stay In The Know
Sign up to the Virgin Australia Supercars Championship Newsletter
We use cookies to ensure that we give you the best experience on our website. If you continue to use this site we will assume that you are happy with it.Ok