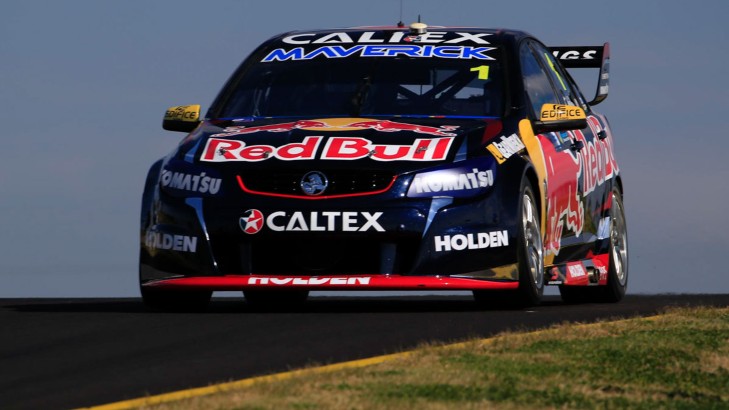 Jamie Whincup will line-up at the Wilson Security Sandown 500 with a brand new Triple Eight chassis in the hope of reinvigorating his Championship campaign.

The defending champion and 2013-14 Sandown winner will test chassis 040 early next week and tackle the enduros with Paul Dumbrell in a brand new V8 Supercar.

Debuting a new car for the PIRTEK Enduro Cup is Red Bull's style, with teammate Craig Lowndes getting a new baby last year and Whincup the previous year before winning in 2013.

In fact, Whincup has told v8supercars.com.au winning the '13 Sandown 500 with a new car was one of the highlights of his career.

"There's nothing nicer than a new car," Whincup said on the Red Bull Racing Australia website.

"Every car is slightly different and unique in its own way, so I'm looking forward to the upcoming test to work on what this car likes to create a balance."

The team believes a new car will give the six-time V8 Supercars champion the best possible chance to push back into Championship contention. He currently sits 449 points behind leader Mark Winterbottom in sixth position.

Five-time title winning engineer Mark Dutton rejoined the car #1 squad in Townsville, which ultimately saw Whincup back in the top five on the Sunday at that event.

"We're excited to get a new chassis under Jamie," Dutton said.

"The team has been working around the clock to get it ready for the enduros and we're excited to see how it shakes down in the upcoming test.

"Each individual chassis - although built to spec - still has its own unique characteristics and it's always an exciting process for both the driver and engineers to see how it plays out."

While Whincup was in a form slump earlier this season, he has bounced back at the past few rounds, earning a third place finish and a win at Sydney Motorsport Pak on Saturday.

"There's no hiding that we had an inconsistent start to the year, but we've definitely made up some ground in the last few rounds and feel like we're at a point where the cars are much closer to the set-up window we need to be in to be able to consistently win races again," Dutton continued.

"Jamie proved that on the weekend at Sydney Motorsport Park and hopefully with the addition of the new car, it'll help add a little extra spark to he and Paul's Enduro Cup defense."

I want to win Bathurst

A matter of principle