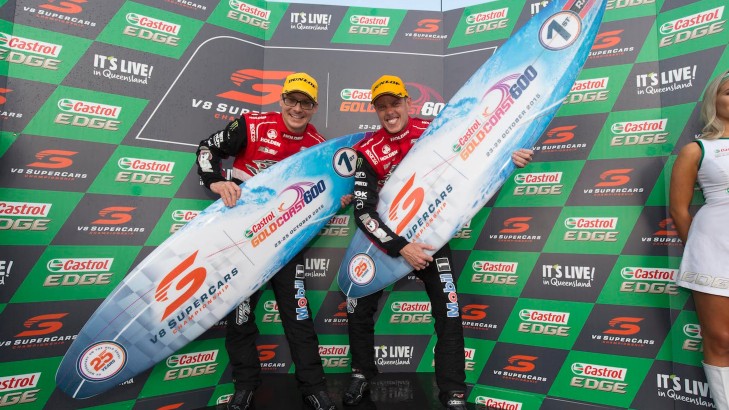 Jack Perkins says his first V8 Supercars race win justifies his decision to swap from racing in the championship full-time to becoming a co-driver with a leading team.

An emotional Perkins watched on in the Holden Racing Team garage as lead driver James Courtney took an unexpected victory in Sunday's 300km race at the Castrol Gold Coast 600 in the #22 Commodore VF.

It was the first time on a V8 Supercars podium for the 29-year old, who has raced in the championship full-time and part-time since 2006, when he debuted for his legendary father Larry's team in the season of endurance.

"I signed with James right back in December and I joined the Holden Racing Team to get race wins," Perkins said.

"I thought race wins might never happen... but I was pretty happy to get that surfboard!"

Perkins raced full-time for Perkins Engineering in 2007, but after being diagnosed with Type One diabetes had to step out of the drive in 2008. He rejoined the championship driving a Commodore for the newly combined Perkins-Kelly brothers team in 2009, but did not continue into 2010.

Last year he rejoined the championship full-time driving a Ford Falcon FG run out of Prodrive Racing Australia for privateer entrant Charlie Schwerkolt. But he couldn't come to grips with a difficult car and the deal ended after a single season.

It was a shattering blow for Perkins, who had spent years re-setting his driving career and making a concerted attempt to emerge from the shadow of his famous father, who won Bathurst six times, raced in Formula One and is regarded as one of Australia's greatest drivers.

"I guess I worked for four years to get that gig I got last year and I put together a bit of a deal with Charlie to go racing, and it didn't go to plan," Perkins reflected. "But for various reasons I thought I could still do this driving caper.

"But I figured I didn't want to be a field-filler and be a main game driver who finished 15th every week.

"If you look at the field, there's six to eight cars that have a chance of genuinely winning, I figured it would be better to do three races with one of those guys than 15 or 16 races making up the numbers.

"I'm pretty committed to being an enduro driver from here forward. There's not many gigs full time that would be of significant interest to me that would present a better opportunity than sitting here right now."

Perkins revealed he had given up on his and Courtney's chances of victory after having to double-stack behind team-mates Garth Tander and Warren Luff.

But a brilliant strategy decision to return almost immediately to the pits and splash a few litres of fuel into the car so it could run to the finish proved crucial, allowing Courtney to leap-frog through the field as rivals rushed in for late-race splash and goes.

"I went and got changed after we double-stacked, I thought our day was done," confirmed Perkins. "But full credit to the whole team, our engineers, James; I sort of had a bit of an inkling we were in with a bit of a sniff with 15 to go, so I ducked back and stuck the race suit on.

"I'm just thrilled. I feel like I worked pretty hard for this over my journey.

"Since I started go-karts I would have written about 4000 sponsorship proposals and chipped away at it, so to win a race with HRT, doesn't get any better than that.

"Dad will be very happy, he has helped out a lot through my career and just in life in general. My dad and mum are my number one and two supporters."

Courtney, who approached Perkins to join him at HRT for the 2015 Pirtek Enduro Cup at the Phillip Island V8 Supercars championship round late last season, was forced to miss the first two Pirtek Enduro Cup events because of serious injuries sustained when hit by debri at Sydney Motor Sport Park in August.

Perkins stepped into the car for that sprint round, while super-sub Russell Ingall came out of retirement to join him for the Wilson Security Sandown 500 and the Supercheap Auto Bathurst 1000. They finished ninth and 11th.

"I was probably the second most disappointed guy when James got injured," Perkins said. "Obviously James was the most disappointed. No disrespect to Russell Ingall, he did a superb job, but when you are fronting up with two co-drivers it is pretty hard to beat these guys."

Courtney was elated for Perkins and also revealed a connection with the Perkins family that dates back to his teenage karting days.

"Jack did a cracking job all weekend as he has done since I stepped aside and he took over the lead of the car. It's been fantastic for me to be able to come back.

Jack Perkins  ›
15' Holden Racing Team ›
Stay In The Know
Sign up to the Repco Supercars Championship Newsletter
We use cookies to ensure that we give you the best experience on our website. If you continue to use this site we will assume that you are happy with it.Ok