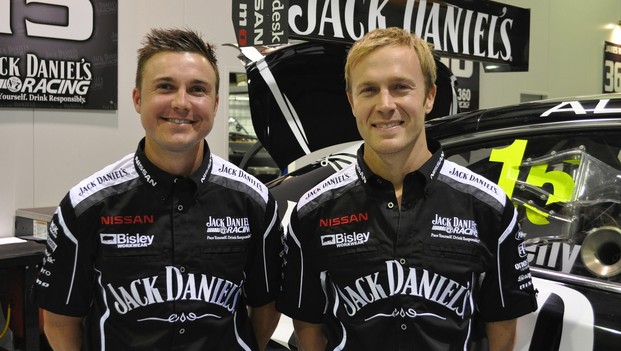 Jack Daniel's Racing today announced its 2013 V8 Supercars endurance driver line up for all three of the season's enduros.

Russell and Reindler (pictured left to right) will drive for the team at Sandown, Bathurst and – with the international driver format no longer compulsory – on the Gold Coast.

Both drivers are comfortable at Nissan Motorsport, albeit in its former guise as Kelly Racing.

Russell returns to the team after driving at Bathurst with Rick Kelly last year, finishing a credible 15th.

"It's great to have ‘Coighty', as we call him, back in the car, we've spent a little bit of time together in the past in the one car, so to team up again is fantastic," Todd said.

"To have some continuity with a familiar face is for me, extremely important. We can basically jump in the car and take off from where we left off the last time we drove together at Bathurst.

"We don't have to learn what each other likes, or learn what a new person is like to work with, so it's pretty much jump in and get straight down to business with David, which I'm really looking forward to."

Russell was equally pleased to spend his third year with the team.

"It's a very exciting time obviously with a factory team, the first time I've been involved in a factory team, so to be teamed up with Todd is a great opportunity," Russell said.

"We get on very well, I've raced with him before and I've got some unfinished business from last time I was with Todd. We were in a really good spot and unfortunately things didn't go our way.

"I think it's time to turn the tables and go and get a very solid result for Nissan Motorsport."

Reindler drove full time for the squad throughout 2012 and both he and Rick are looking forward to sharing an Altima.

"Karl in my opinion has got a little bit of unfinished business within our team, we had him last year as one of our drivers and particularly towards the later part of the year, he really found his straps and did a fantastic job," Rick said.

"It's been tough for him not to be in the car full-time this year, but for him to join myself at the three endurance races is a good opportunity for Karl to jump back in and show that he can do a fantastic job as he did last year.

"For us it's a great opportunity to get a strong result, I think that Karl and myself as a pairing is as strong as anyone else out there and it certainly gives us a chance of getting a good result."

There will be plenty of interest surrounding Jack Daniel's Racing's 2013 endurance season, with Nissan returning to Mount Panorama to compete in the Bathurst 1000 for the first time since its controversial victory in 1992.

“I'm really looking forward to teaming up with Rick for all three endurance races this season, obviously I was with the team last year, so I'm comfortable with how everything works," Reindler said.

"Having the opportunity to be part of the Nissan factory team when it returns to Bathurst for the first time since 1992 is a huge deal, and I think Rick and I have got a great chance of getting a really strong result.

"I get on really well with Rick and we are a similar build, which makes seating position and things like that a lot more simple, I just can't wait to get in the car."

Russell and Reindler will have the opportunity to drive the Jack Daniel's Nissan Altima during the designated co-driver practices sessions later in the year.

The first endurance race of the season is the Sandown 500, from September 13-15. The team then has almost a month before the all-important Supercheap Auto Bathurst 1000 from October 10-13, while the Armor All Gold Coast 600 will run from October 25-27.

Todd Kelly  ›
Stay In The Know
Sign up to the Virgin Australia Supercars Championship Newsletter
We use cookies to ensure that we give you the best experience on our website. If you continue to use this site we will assume that you are happy with it.Ok