Jack Daniel’s decision on the way 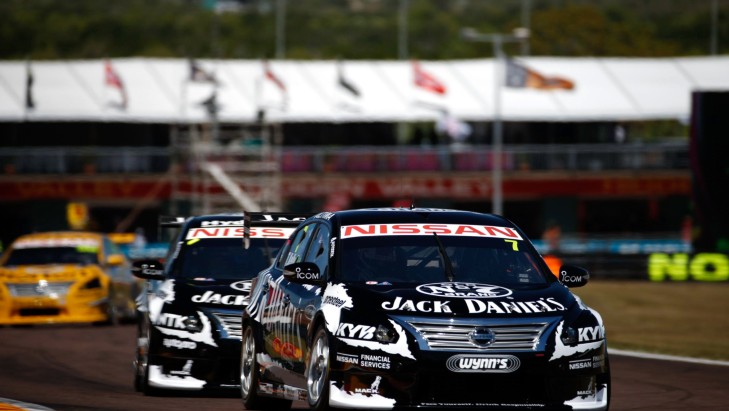 Having celebrated its 300th race start in the V8 Supercars Championship at the Castrol Townville 500 - Driven By TAFE Queensland, Jack Daniel's is now focussing on negotiations to continue as naming rights sponsor of Rick and Todd Kelly's factory Nissan Altimas.

The Tennessee Whisky maker, a division of the giant Brown-Forman Corporation, could complete a new multi-year multi-million dollar deal as soon as the end of July, but local Jack Daniel's brand manager Tim Ryder conceded it may take until September.

The final sign-off has to come from the company's US headquarters.

"It would be great to have everything locked and loaded realistically by the end of July," Ryder told v8supercars.com.au.

"But anywhere between now and the start of Sandown would be the time where both parties would be happy to work within to know what is happening next."

Ryder also revealed that while a two-car model was preferred, cutting back to a single car model had been considered.

"It would be good to continue with that model because it gives us versatility."

Jack Daniel's has been a naming rights sponsor in V8 Supercars racing since 2006 when it joined with Perkins Engineering, which was then running Steven Richards and Paul Dumbrell.

It made the switch to the newly-formed Kelly Racing operation in 2009 and has been with Rick and Todd Kelly ever since, through the operation's first four years as a privateer Holden team and its last two as the factory-backed Nissan Motorsport.

Ryder said there was no chance of Jack Daniel's shifting its investment to another team, stressing that if it was involved in V8 Supercars it would be with the Kellys.

"We have been in it for a long time and we have ridden the highs and lows," Ryder said. "Todd, Rick and the whole team are incredible ambassador for our brand and that's what we love."

While the Kellys haven't been able to deliver a race win for Jack Daniels's since 2011, Ryder said race results weren't the primary measure of the success of the sponsorship.

"It's a great partnership and a great opportunity for us to engage with our consumers ... whether it be metro or regional. The Jack Daniel's consumer and the V8 Supercars fan is almost identical."

"It's an engagement tool we utilise with the trade too," he said. "People want to come (to the races) and enjoy it."

Meanwhile, the current deal that Norton has for the naming rights sponsorship of the other two factory Nissans of James Moffat and Michael Caruso is also due up this year.

Todd Kelly  ›
15' Jack Daniel's Racing ›
2014 Coates Hire Ipswich 400  ›
Stay In The Know
Sign up to the Virgin Australia Supercars Championship Newsletter
We use cookies to ensure that we give you the best experience on our website. If you continue to use this site we will assume that you are happy with it.Ok