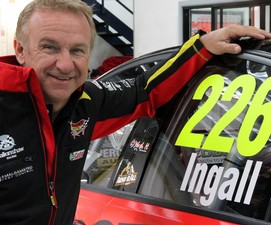 Russell Ingall says he isn’t one for statsand numbers – and would much prefer 226 to be his number of wins ratherthan event starts.

“All that signifies is I’ve hung around thesport a while – I’m not sure you get a Rolex watch for that,” Ingall said.

At the next event in Townsville Ingall willwell and truly claim the title of most experienced V8 Supercar driver, surpassingJohn Bowe with his number of event starts. As a one off, his racing number on his Supercheap Auto Holden Commodore willchange to 226 to acknoweldge the achievement.

He felt the milestone marked survival and said themore commercial the sport has become, the more cut-throat it was.

“In any high level sport with the amount ofdollars involved, it gets more and more cut-throat and you have to be on yourguard,” he said. “It’s a lot of hard work outside of the car as well as inside.

“But to be around and have that manystarts, means I’ve probably been of some sort of value to the sponsors involvedover the years and had a strong fanbase.

“At the end of the day it’s only a numberand I have mixed emotions about the whole thing – but the benefit is I’mstill in a sport I started in 1996 … I’ve been motor racing my whole life andit’s good to be involved.”

While plenty of fuss has been made aboutIngall’s intention to stop racing V8 Supercars full-time at the end of theseason, he hasn’t been happy to see the ‘R’ word splashed about.

“I earn a living racing cars – thatwill not change. If someone wants me to a race a car, I will race it. That hasto be put very clearly – if someone came up tomorrow and asked me to racein V8s, I’d do it.”

He is confident he will find a home for the2014 enduros (having been contacted about drives already) and has his eye onoverseas options as well.

Adding to the pain of the retirement talkis the results tally this year. While ‘The Enforcer’ expected a strong runafter leaving the first event fourth in the Championship, it hasn’t cometogether.

Last event in Darwin he started the weekendby qualifying in 28th – something he wasn’t happy to be reminded of.

“The year started off really well – wealmost had a podium in Adelaide and just missed out with fourth.

“I thought this year was going to be aburster … but since, it’s been on the slow decline ... I just haven’t gelled with the car."

At this point – sitting 18th in theChampionship points – Ingall has turned his focus to the endurance races.

But how difficult is that when you don’tofficially have a co-driver yet?

“That’s for the team and the sponsors (toworry about),” Ingall said.

Ingall described Bathurst as an importantrace and given he finished in the top 10 there last year, finishing with a triple stint, he believes he has as good anopportunity as anyone to claim a win on the Mountain.

Ingall has two Bathurst wins to his name,27 race wins, one pole position and one Championship.

Tickets are available for the Sucrogen Townsville 400 through Ticketek.

Russell Ingall  ›
15' Supercheap Auto Racing  ›
2013 Sucrogen Townsville 400  ›
Stay In The Know
Sign up to the Virgin Australia Supercars Championship Newsletter
We use cookies to ensure that we give you the best experience on our website. If you continue to use this site we will assume that you are happy with it.Ok