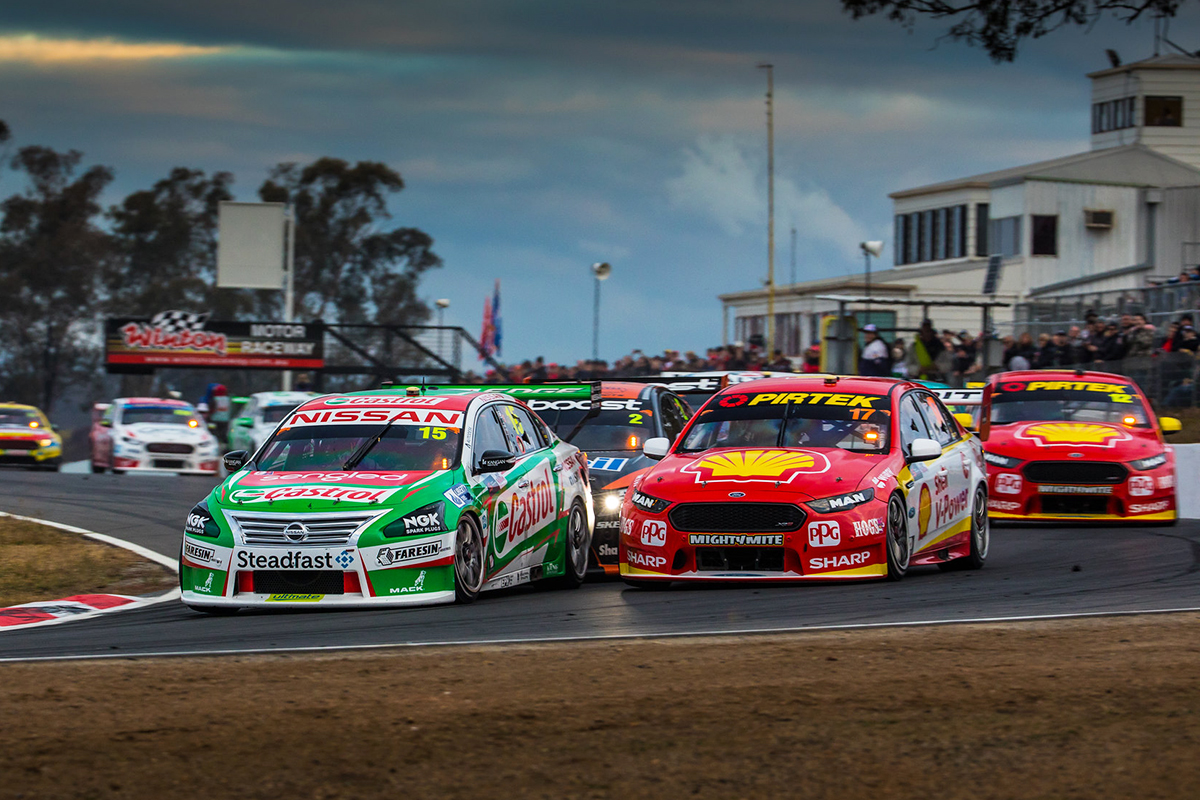 Before each Supercars round at Winton or Queensland Raceway, there's always debate about whether racing at your test track offers an advantage.

So, as the Truck Assist Winton SuperSprint looms, let's crunch some numbers.

On paper, racing at your test track should be an advantage, as a venue you know better than others.

Testing in Supercars is highly-limited; teams have just three days per calendar year, one of which is the mandatory pre-season running, at Phillip Island in 2019.

That leaves two days to gallop around Winton or Queensland Raceway, based on your location, but data built up on those days can become misleading.

Both circuits are notoriously fickle when it comes to weather conditions, meaning what works on one run might not work an hour later, let alone weeks or months later at a race weekend.

Similarly, if you talk about testing with any Supercars driver for more than about 30 seconds, they'll tell you how tyre-limited the exercise is, largely running around on old rubber.

For what it's worth, Penrite Racing, Mobil 1 MEGA Racing, Brad Jones Racing, Boost Mobile Racing and Kelly Racing rookie Garry Jacobson tested at Winton last week, ahead of the 2019 event.

BJR's headquarters is in Albury, New South Wales, but is grouped with the Melbourne teams when it comes to Supercars testing, given that's just over an hour up the Hume Highway from Winton.

Will those laps help? 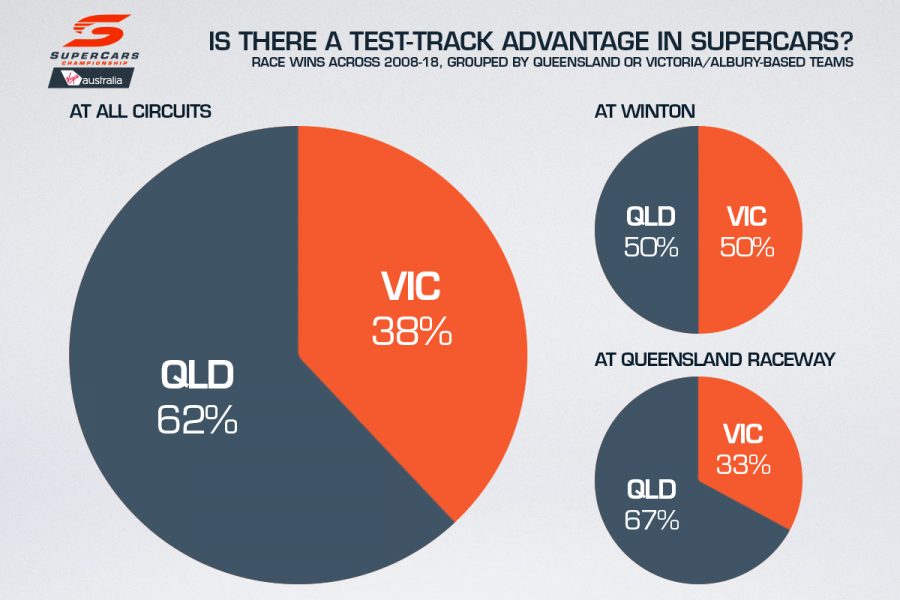 The headline numbers are that, yes, teams that test at Winton do win there more often than they do across a season.

Similarly, teams that test at Queensland Raceway do win there more often than they do across a season.

That is based on the numbers from the last 10 completed campaigns, 2008-18, a period dominated by Queensland-based outfits led by Triple Eight.

Across that decade, only a single title has been won by a driver from a squad based elsewhere; Mark Winterbottom in 2015 for what's now Tickford Racing in Melbourne.

The spread of race wins is – fortunately for those based in Victoria or Albury, grouped for this exercise based on testing at Winton – more even than the 9-1 on titles.

Of 345 completed races across all circuits, 213 have been won by teams in the north against 132 for those in the south.

That's 62% for Queensland outfits and 38% for those elsewhere. 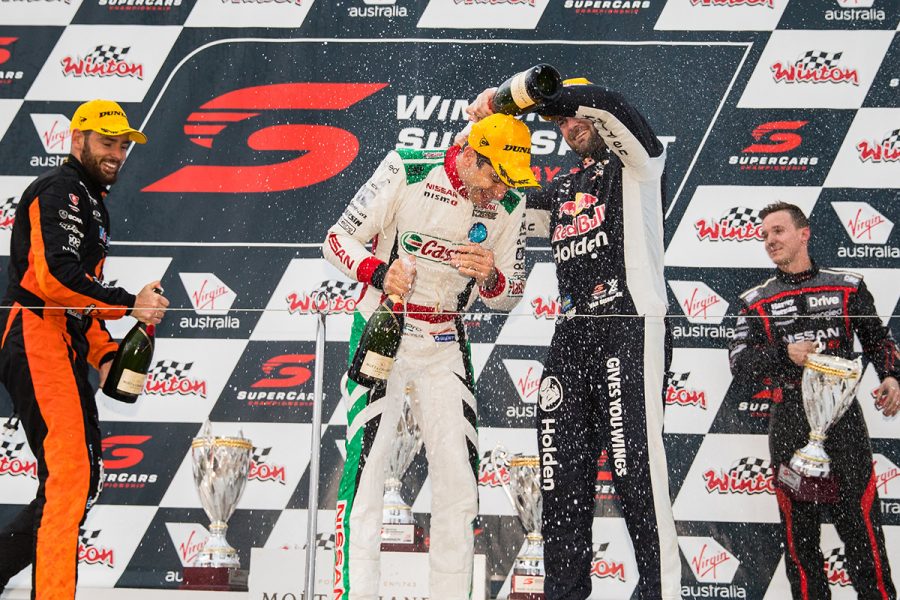 From 26 races across the last 10 events, there is actually a 50-50 split when it comes to victories at Winton.

Home and away teams have both recorded 13 wins apiece; that even share is 12% better than the southerners average across a season.

The Queenslanders started the period we're looking at in style, winning nine of the 12 races between 2008 and '12.

The most-local of all, BJR claimed three, while the only interloper was Erebus Motorsport with Lee Holdsworth in 2014 – when it was still a Gold-Coast-based Mercedes outfit.

Over the last two years, it's 3:1 for the away teams, a clean sweep only thwarted by Rick Kelly on the Saturday last year.

While we are talking circuit-specific records, Kelly's success means two of the three Nissan Altima's Supercars victories have come at Winton, the other recorded at Hidden Valley. 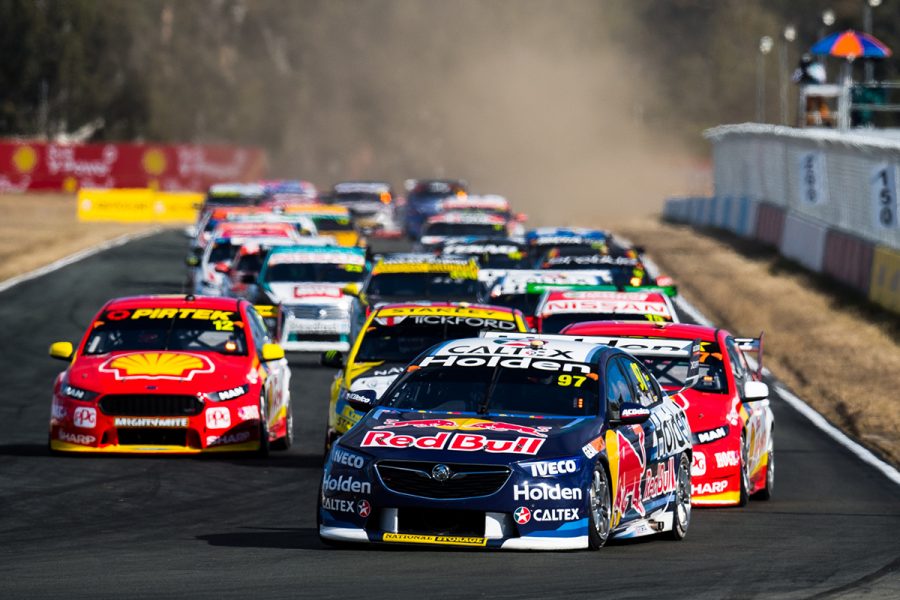 The Ipswich circuit has hosted 27 races over the last 10 years, 18 of which have been won by Queensland-based teams.

That's a neat two-thirds, and a very slight increase on the 62% they've averaged across the last 10 seasons.

The nine wins for the visitors have largely been recorded in clusters; in 2008 and '09 and then '14 and '15 between what's now Tickford and Walkinshaw Andretti United.

For the locals, Triple Eight has 12 wins at the Paperclip and DJR/DJR Team Penske the other six. 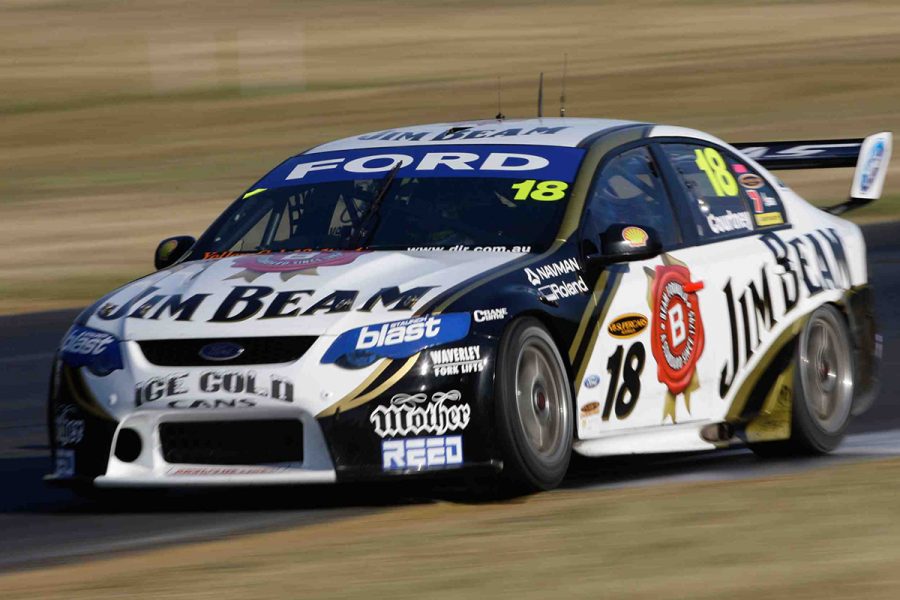 Having your cake and eating it too...

Wins at both circuits in the same year are actually quite rare.

The only driver to have swept the unofficial Test Track Cup was James Courtney in 2010.

Those rounds were back-to-back, and accounted for four of Courtney's five victories in his title-winning campaign.

In 2012, Craig Lowndes won both races at QR and then one at Winton, but second in the other to team-mate Jamie Whincup prevented a perfect run.

Three years later, what's now Tickford was the dominant force through the first two thirds of the season.

It took a sweep of the mid-year Winton and Ipswich events; two wins for Winterbottom and one for Chaz Mostert at both circuits.

DJR Team Penske's Scott McLaughlin is the most-recent driver to win at both circuits, grabbing one at each in 2017. 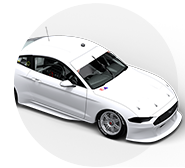