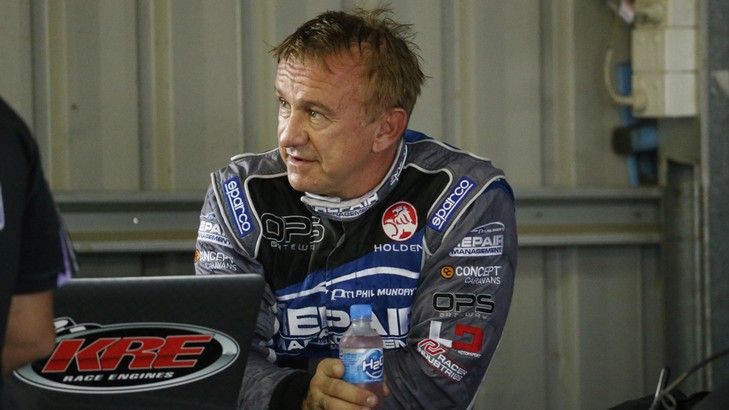 UPDATE: Russell Ingall is being investigated by CAMS stewards for his post-race comments following race one at the Winton 400.

A furious Ingall criticised the decision by CAMS officials to hand out a drive-through penalty at a stage when he was charging through the field in the first of two races on Saturday.

Ingall was interviewed on television and by the attending media following the race. CAMS officials will investigate his comments from those interviews.

‘The Enforcer’, who had taken the punt on swapping to fresh soft tyres midway through the 100km Race and  powered through to third place from the back of pack in his Repair Management Australia Holden Commodore VF, was penalised for contact with Wilson Security Ford Falcon driver David Wall.

An emotional Ingall, who dropped to 15th but managed to fight back to finish seventh, was mystified why he was singled out for the only drive-through in a race full of collisions and incident.

“How come we are singled out the ones as the one copping it and everyone else gets judged afterwards?” he asked.

“Judge it on its merits,” Ingall told v8supercars.com.au. “At least let us have a voice afterwards. Once you throw that flag out you’ve buggered our race. She’s gone, we are screwed.

“There is nothing we can do, we can’t get the result back. You can’t say ‘we will give you your second or third place back’.

“They should look at it afterwards.”

Ingall, who shifted to the small Lucas Dumbrell Motorsport team this year, said the penalty was damaging for an operation fighting to keep its place in the Championship.

If he had finished on the podium it would have been LDM’s best ever result.

“Tell me that was not good television viewing?” the 2005 V8 Supercars Champion demanded. “Tell me it wasn’t good for this team to keep it going?”

Ingall also criticised drivers who chose to try and defend against him for track position when their tyres were in poor condition and they had no serious hope of holding him off.

“People were all over the place there, doing stupid stuff, making stupid passes. They don’t take anything into account, the track was breaking up. You go off line you are buggered,” Ingall said.

“The two cars that spun out I front of me, they were off line, they were buggered, they were dead in the water, If they want to fight and mess around and block then they deserve what they get.

“People would have been on the radio saying ‘hey the dude coming up behind you is on good tyres, don’t do dumb stuff’.”

Ingall said he was disappointed by the behaviour of the officials, who he believed didn’t understand the significance of the decision they impose.

“This day and age of struggling away here trying to keep sponsors and maintain a decent performance and keep cars in the main game and they consistently do idiotic stuff like that.

“They need to put racers in there that know about these things. It’s so annoying it’s ridiculous.”

Russell Ingall  ›
15' Repair Management/Team CoolDrive ›
2014 Winton 400  ›
Stay In The Know
Sign up to the Virgin Australia Supercars Championship Newsletter
We use cookies to ensure that we give you the best experience on our website. If you continue to use this site we will assume that you are happy with it.Ok